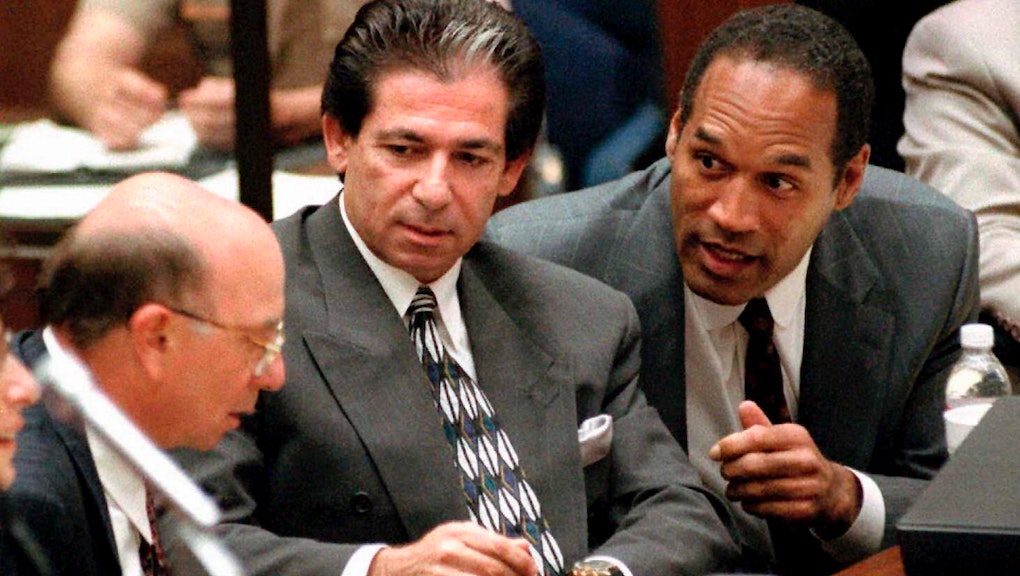 How the O.J. Simpson Trial Made "Kardashian" a Household Name

With the first season of American Crime Story set to premiere on Tuesday, FX and show creator Ryan Murphy will explore the intricacies of the infamous O.J. Simpson murder trial. In many ways, the trial and its controversial outcome provided the framework for the 24-hour news cycle that encompasses broadcast and digital media. However, the trail also brought the national spotlight on one of Simpson's defense attorneys: Robert Kardashian. Now, obviously the Kardashian name has household recognition, but if it wasn't for the Simpson trial, it's likely that wouldn't have happened.

Kardashian — in addition to being a lawyer — was one of Simpson's closest friends prior to the murder, and joined the defense "dream team" for the embattled former running back, who was purported to have killed his wife, Nicole Brown Simpson, and her friend, Ronald Goldman.

At the same time, his ex-wife, Kris Jenner, was a close friend of Brown Simpson, having known her since she was a teenager. "For nearly two decades the Kardashian-Simpson clans shared vacations with their children, celebrated countless birthdays and supported each other through good times and bad," Aili Nahas wrote for People.

The fabric of the family split over the guilt of Simpson, with Kardashian in defense of the former NFL star, and Jenner and her then-husband Bruce Jenner giving Brown Simpson's family support. "I definitely took my dad's side," reality star Kim Kardashian said, according to the Mirror. "We just always thought my dad was the smartest person in the world, and he really believed in his friend."

However, it wasn't the specific actions of Kris Jenner or Kardashian that spurned the media attention — rather, it was the celebrity influence already present in the trial. The initial car chase between Simpson and the police following the murder was viewed by around 95 million people across the United States, as the scene stopped regular television programming almost universally (something we see a lot of today).

Every facet of the case was broadcast by the likes of Court TV and CNN — a concept that was considered a huge risk in television at the time. "Rather than recoil, TV viewers barely noticed they were ignoring their soap operas and prime-time dramas because this one beat them all," Kent Babb wrote for the Washington Post. "Here was a celebrity on trial for murder — with race and sex providing colorful sidebars — with a cast of newly familiar faces as its central characters. Suddenly the decision to carry the case around the clock seemed brilliant; in the days before live streams, constantly updated websites and social media, the two channels were feeding a national hunger."

This soon became an industry-wide trend. Court TV, off the success of the Simpson trial, failed to garner much attention after, so it rebranded as TruTV in 2008 to promote "actuality" television, according to the Post.

The trial was both television and entertainment, based on reality. Sound really familiar? It's the framework for what a present-day reality show is comprised of. The Simpson trial was in the "infotainment" vein, but reality television wasn't far off. "Instead of actors reciting scripts, cameras simply showed real people in strange situations," David Whitley wrote for the Orlando Sentinel. "It cannot be coincidence that when Simpson went on the lam that morning, the attorney who read O.J.'s suicide note to media was named Kardashian."

The Kardashian fame was a byproduct of the industry-wide trend produced by the Simpson trial. Through intimate involvement in the suspect and the victim, the pieces fell in place for Robert Kardashian's extended family to fall into the spotlight, and become some of the first celebrities who are "famous for being famous."