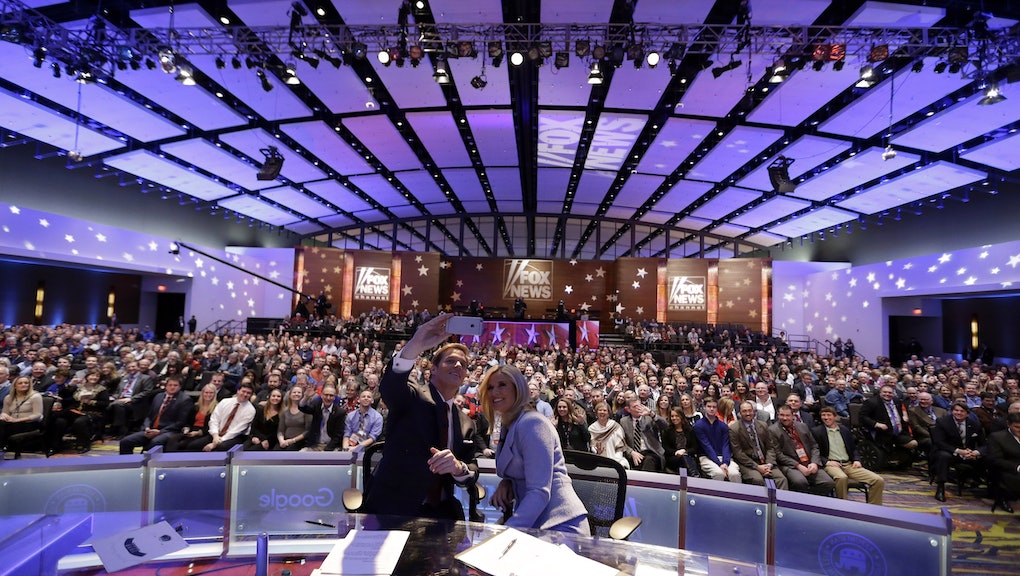 Just days before voters in The Hawkeye State are scheduled to caucus, Republican presidential hopefuls gathered Thursday at the Iowa Events Center in Des Moines, Iowa, to debate. Fox News hosted the event, which featured all but one of the GOP presidential hopefuls who are racing for the White House — party frontrunner Donald Trump. The real estate mogul chose to abstain from Thursday night's debate due to longstanding discord with one of the night's moderators, Fox News' Megyn Kelly, a tussle that's seen no shortage of vitriolic comments from Trump.

Despite a bullish statement from Trump's campaign that hammered home the point Trump would not attend, murmurings percolated in the hours before the debate questioning whether or not the business tycoon would crash the GOP party. Yet according to the Trump campaign statement, the candidate's absence Thursday seemed to be a foregone conclusion, despite the network's open invitation.

"We can't give in to terrorizations toward any of our employees," a Fox News spokesperson said in an emailed statement to Mic. "Trump is still welcome at Thursday night's debate and will be treated fairly, just as he has been during his 132 appearances on Fox News & Fox Business, but he can't dictate the moderators or the questions."

Check back as Mic will be live-blogging a recap and highlights from the debate here.

"Unlike the very stupid, highly incompetent people running our country into the ground, Mr. Trump knows when to walk away," reads the statement. "Roger Ailes and Fox News think they can toy with him, but Mr. Trump doesn't play games... He will not be participating in the Fox News debate and will instead host an event in Iowa to raise money for the Veterans and Wounded Warriors, who have been treated so horribly by our all talk, no action politicians."

At press time, polls showed that Trump's longstanding jump on his challengers persists. According to data released Thursday from Investor's Business Daily, 31% of Republican primary voters support Trump, compared to 21% who support Cruz, 10% who support Rubio and 9% who support Carson.

Opening remarks: The first question moderators asked went to Cruz, and Kelly didn't split hairs. Instead, the moderator asked Cruz to comment on what message he thought Trump was sending voters by not attending. In response, Cruz made a joke of Trump's political pageantry. "I'm a maniac and everyone on this stage is stupid, fat, and ugly," Cruz said, "and Ben, you're a terrible surgeon. Now that we've gotten the Donald Trump portion out of the way I want to thank everyone here for showing the men and women of Iowa the respect to show up." After mocking the frontrunner, Cruz said he had no intention of waging personal attacks on Trump.

Speaking next, Rubio was quick to cut into Obama and to highlight the true opposition — the Democratic party, namely, the party's frontrunner and former Secretary of State Hillary Clinton. "Hillary Clinton cannot win this election," Rubio said. "Hillary Clinton this week said Barack Obama would make a great Supreme Court justice. The guy who systematically violates the constitution."

Speaking next, Bush sarcastically spoke of missing Trump's companionship onstage and confessed he's "part of the establishment" considering his blood relations, while Christie pointed out Americans' frustration with dysfunction and inertia in Washington, D.C., while Rand brought up NSA reform.

Perhaps the first biggest challenge of the evening came when moderatos pressed Carson on his decision to run for the role of Commander in Chief without having any political experience under his belt.

"I will gladly confess that I'm the only one on this stage with no political title," Carson said. "You're not going to hear a lot of polished, political speech from me. But you will hear the truth. And I don't think you have to be a politician to tell the truth."

"We need people who can think out of the box and solve problems," Carson added.

The candidates address terrorism: The tone on Thursday intensified as the conversation turned to the threat from the Islamic State Group, or ISIS, a discourse during which Cruz spoke of carpet bombing and was unapologetic about the "vigorousness" with which he planned to battle ISIS if elected. The dialogue also brought perhaps Rubio's most impassioned remarks of the night so far. "ISIS is the most dangerous group in the history of mankind," Rubio said, continuing on to say the group "burns people alive in cages" and "sells off little girls as brides."

"ISIS wants to trigger an apocalyptic showdown in Syria," he continued. "They want to trigger an armageddon showdown. They need to be defeated. They are not going to go away on their own."

Bush weighed in next arguing for a need to re-engage with Sunni tribal leaders and train Sunni-led forces to take out the caliphate of ISIS on the ground and from the air. Bush also argued for a need to arm the Kurds and "Get the lawyers off the backs of our soldiers."

About 30 minutes into the evening, Cruz pulled a Trump and threatened to leave the stage. According to Cruz, the moderators were asking leading questions aimed at making the candidates attack each other. Reacting to Cruz's remarks on Twitter, some users were unsympathetic.

Terrorism, criminal justice reform and Planned Parenthood: The discussion of terrorism turned to homegrown threats, during which time the candidates evoked the mass shootings in San Bernardino, California, on Dec. 2, which were carried out at the hands of two radicalized Islamic jihadists. Christie argued that fighting terror threats at home can be achieved without profiling, so long as law enforcement has all the "facts." Christie also pointed to what he sees as a war on law enforcement in America, a fight for which he said both Clinton and Obama are culpable of promoting.

Perhaps a natural segway, the conversation turned to holding law enforcement officials accountable in the instances of violence or injustices to citizens. Paul, who said he'd been to Ferguson and had there observed that a third of the city's budget is being funded by public fines, said he supports legislation that would put body cameras on police officers. He also argued for a degree of criminal justice reform, so that African-American males are not incarcerated at disproportionate rates as compared to other American citizens. Paul's comments drew a degree of applause from the audience.

Immigration takes center stage: The candidates cycled through a lengthy discussion on how to handle illegal residents in America and whether or not the candidates each support or oppose a path to legalization. In a somewhat bizarre "gotcha" moment from Kelly, the moderator played clips of Cruz supporting different pieces of legislation which would map out a path to legalization, though that's contradictory to the platform he's laid at the core of his campaign. Cruz's opponents weighed in to join in challenging Cruz's history of fighting against amnesty.

"When that battle was waged my friend Sen. Rubio chose to stand with Barack Obama and Harry Reid and Chuck Schumer and support amnesty," Cruz answered. "I stood alongside Jeff Sessions and Steve King and we led the fight against amnesty. And if you want to know who's telling the truth, you should look and ask people like Jeff Sessions and Steve King and Rush Limbaugh and Mark Levin."

The back and forth led Rubio to launch a direct verbal attack against Cruz, alleging that the candidate has said, done and continues to do anything to win votes, drawing an audible reaction from the audience in attendance.

Next up for the candidates was a segment based on "electability," during which time Cruz said he's not a "candidate of career politicians," Bush affirmed he's confident he can beat Clinton, Rubio dragged religion into the discussion and Christie pointed to his track record of alleged successes in New Jersey.

With about half an hour left in the debate, the candidates discussed the role of religion in politics. Kasich linked the topic of faith to that of medicaid, arguing for a need to support and treat the disabled, the drug addicted, the mentally ill and the poor. Yet carrying that digression further, the moderators wanted to know where the candidates stand on same-sex marriage, which was, perhaps, a moot point considering it's already been legalized.

"I think this is an important question," Rubio said, "I think if you do not understand our Judeo-Christian values are one of the reasons America is such a special country, you don't understand our history."

The moderators lob questions on foreign policy: During a debate on foreign relations, Carson called Russian President Vladimir Putin an "opportunist" and a "bully," and argued for a need to extend military exercises to Estonia, Latvia and Lithuania. Speaking next, Rubio also took aim at foreign leadership, calling Iran's supreme leader "a radical shia cleric" who's equipped with "an apocalyptic vision of the future." Meanwhile, Kasich said he's keeping a concerned eye on the government's pursestrings.

"You read about all the companies now that are doing business, about to do business in Iran, and we don't get this settled down with other countries in the world about sanctions, then Iran could violate that agreement and we're the only ones putting the sanctions on," Kasich said, adding that should Iran violate the recent nuclear deal, "We need move."

Nearing 11 p.m. Eastern, Bush briefly fielded a question from a young Muslim-American YouTube blogger and entrepreneur, who wanted to know what could be done about what she sees as rising anti-Muslim rhetoric that's permeated American politics and society. Bush was ready with a solid answer.

"We need a strategy to destroy [ISIS]," Bush said. "You can't do that without the cooperation of the Muslim world because they're as threatened as we are, so I think it's important for us to be careful about the language we use which is why I've been critical of Donald Trump disparaging women, disparaging hispanics. That's not a sign of strength."

In closing: During time allotted to closing remarks, Rand claimed to be the only fiscal conservative on stage and promised voters a balanced budget. Kasich said that, with the right attitude, anything's possible, including raising wages. Bush promised to "fix the mess in Washington," restore and rebuild America's military and, if elected, defeat Clinton.

Christie evoked 9/11 in his closing remarks, pointing to his time as governor saying he's had to make the hard decisions it takes to protect Americans from the threat of terror. Carson devoted the majority of his closing remarks to quoting the Constitution, finishing with "enough said." And in closing, Cruz said the core question remaining in the 2016 election concerns trust.

In the immediate aftermath of the debate, a clear victor of the evening's event was not entirely evident. However, according to a real-time poll from the Drudge Report, and according to some Twitter users who weighed in, the debate's true victor even never set foot on Fox New's debate stage.

In the words of Ben Carson, "enough said."