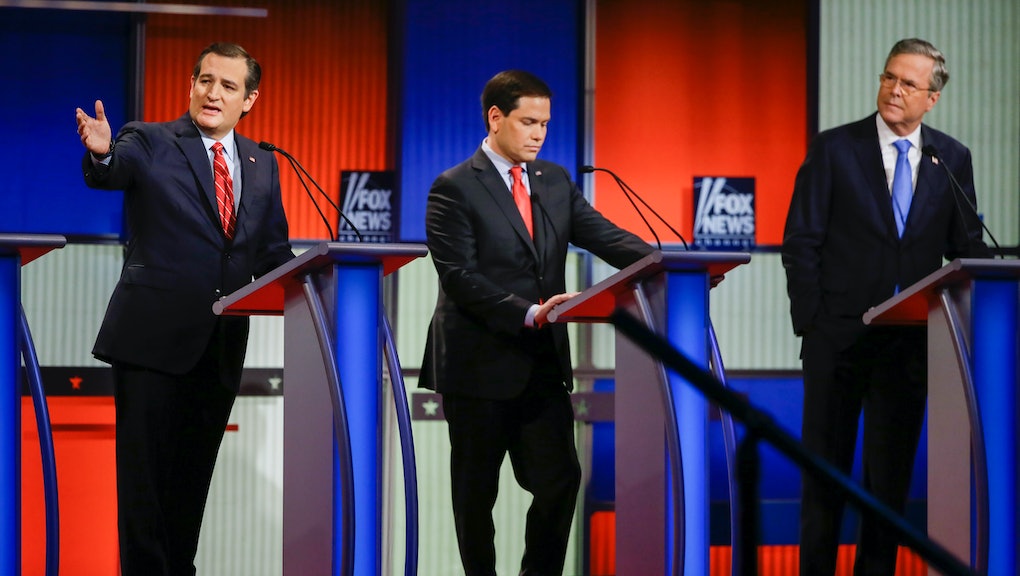 The seven leading Republican presidential candidates, minus frontrunner Donald Trump, descended on Des Moines, Iowa, on Thursday night for their seventh debate of the 2016 cycle.

With the Iowa caucuses just four days away, Thursday's event came with the highest stakes yet. As Trump continues to dominate national polls and moves into a lead in Iowa, the prospect that the GOP might nominate the businessman is seen as increasingly likely. For his rivals, the debate presents one of the few remaining opportunities to shake up the race.

Trump's absence was notable, and the debate was much more low-key than previous Republican debates. With Trump not on the stage, Sen. Ted Cruz of Texas became the target of many of the other candidates' fire, most notably Sen. Marco Rubio, who is struggling to find a foothold for his candidacy.

Here are the 10 most important exchanges and takeaways from the seventh Republican debate:

1. Ted Cruz started things off with a lame joke at Trump's expense.

Asked by co-moderator Megyn Kelly about Trump's decision to skip the event — in retaliation for what Trump believed was Kelly's unfair questioning of him in the first GOP debate — Cruz tried his hand at humor.

"Let me say I am a maniac and everyone on this stage is stupid, fat and ugly. And Ben [Carson], you're a terrible surgeon," Cruz said. "Now that we've gotten the Donald Trump portion out of the way, I want to thank everyone here for showing the men and women of Iowa the respect to show up and make the case to the people of this state and the people of the country why each of us believe we would make the best commander in chief."

An old college try, at the very least. — Luke Brinker

2. Straight out of the gate, Sen. Marco Rubio pushed extremely hard for a tough foreign policy.

The first two times he spoke, Sen. Marco Rubio (R-Fl.) went out of his way to make it extremely clear that he believes in American exceptionalism and muscular foreign policy — an emphasis that likely stemmed from polling data showing Republican voters consider national security a top concern.

First when asked about how he's going to unite a fractious party, the Florida senator chose to use the question to launch into a tirade about how Obama is making the country weaker:

"I believe the world is a safer and better place when America is the strongest power in the world, I believe only with a strong America will we defeat this radical group called ISIS," Rubio said. "If we capture any of these ISIS killers alive, they are going to Guantanamo Bay, Cuba, and we'll find out everything they know."

Rubio's eagerness to lean into the issues telegraphed a clear agenda: to make it clear that he was one of the most unapologetic hawks on stage. While it can often seem like the Republican candidates are all trying to sound tougher than the other, there isn't uniformity in their views. Trump has made it clear that he has an aversion to intervention through his forceful critiques of the Iraq War, and Cruz too has expressed skepticism of the neoconservative ideology that pervaded the Republican response to 9/11. Rubio very much sounds like a throwback to the Bush era. — Zeeshan Aleem

3. Cruz pulled a Trump and threatened to walk off the stage.

Accusing the moderators of trying to undermine him, Cruz sounded positively Trumpian when he suggested he may have to walk off the stage.

"No, a debate is a policy issue," Cruz fired back. "But I will say this, though, if you guys ask one more mean question, I may have to leave the stage."

4. Sen. Rand Paul (R-Ky.) made a great point about the problems plaguing Ferguson.

When Paul was asked what can be done to improve police accountability and public safety in places like Ferguson, Missouri, he offered suggestions across a variety of policy domains. That wasn't surprising — he's made it clear he's an ally of the criminal justice reform movement for some time now. But he pointed out one particularly important feature of how Ferguson functions that is often neglected in debates about police reform that tend to stay limited to questions surrounding use of force.

"I've been to Ferguson. One thing I discovered in Ferguson was that a third of the budget for the city of Ferguson was being reaped by civil fines," Paul said. "People were just being fined to death. You and I ... we get a $100 fine, we can survive it — if you're on the edge of poverty and you get a $100 fine, you can lose your job."

Paul's decision to highlight an overbearing, financially predatory criminal justice system in Ferguson was a smart policy point about the systemic issues that breed mistrust of the police — and one that speaks to classic conservative principles of small government. Paul's no defender of the social safety net, but his sympathy for the way the poor can be discriminated against had a compassionate edge to it. — Zeeshan Aleem

Asked by Wallace about "one thing that the federal government does now that it should not do at all," Christie quickly responded, "Yeah, you want one? How about one that I've done in New Jersey for the last six years: get rid of Planned Parenthood funding from the United States of America."

The governor's answer earned him quite the applause. Christie's choice to single out the women's health care provider over other cuts he's made to the budget during his time in office was significant. Despite indictments of the anti-abortion activists from the Center for Medical Progress responsible for the heavily edited videos alleging the organization was harvesting fetal tissue by a grand jury in Texas, Christie is doubling down on cutting funding for Planned Parenthood.

6. Megyn Kelly demolished Rubio over his inconsistencies on immigration.

In a particularly tough moment for Rubio, Fox played various clips from Rubio's 2010 Senate bid, in which he campaigned vigorously against immigration reform and said that a pathway to citizenship was code for "amnesty."

"Within two years of getting elected you were co-sponsoring legislation to create a path to citizenship — in your words, amnesty. Haven't you already proven you cannot be trusted on this issue?" Kelly asked.

"No, because if you look at the quote, it's very specific, it says blanket amnesty. I do not support —" Rubio began.

After Kelly noted that Rubio had specifically called any path to citizenship "amnesty," Rubio said, "At the time and context of that was in 2009 and 2010 where the last effort for legalization was an effort done in the Senate, an effort led by several people that provided almost an instant path, with very little obstacles moving forward."

Since helping author that bill, Rubio has backtracked on his support for reform, seeking to accommodate himself to the GOP's more restrictionist base.

But in highlighting his waffling on the issue, Kelly gave conservatives reason to doubt Rubio's sincerity. — Luke Brinker

7. And Cruz came in for a flaying on immigration, too.

Cruz wants to capitalize on conservative unease over Rubio's immigration history, but the Texan also has a spotty record on the issue, and Kelly didn't let him forget it.

"Sen. Cruz, when Sen. Rubio proposed that bill creating path to citizenship, you proposed an amendment. It would have allowed for legalization but not citizenship," Kelly noted.

Cruz explained his record thusly: "The fact that each amendment [I proposed] didn't fix every problem [in the 2013 immigration bill] didn't mean that I supported the rest of the bill. And I'll tell you who supported my amendment. Jeff Sessions, the strongest opponent of amnesty in the United States Congress, and he did so because taking citizenship off the table was important and it revealed the hypocrisy of the proponents of this bill who were looking for votes."

The exchange provided fodder for Cruz's opponents, including Paul, who said Cruz's record pointed to an "authenticity problem," despite his carefully cultivated image as a consistent and true-believing conservative. — Luke Brinker

8. Kelly asked a question everybody's been dying to know the answer to.

Kelly wielded a hammer the whole night, and one of her best strikes was against Jeb Bush.

"Poll after poll shows you running among the worst in your party against Hillary Clinton ... yet still you and the super PACs supporting you continue to blanket the airwaves with cutting ads, not against Mrs. Clinton but against your fellow Republicans especially Sen. Rubio," Kelly said. "Do these attacks do more harm than good by targeting those candidates who appear to have the best chance of defeating Mrs. Clinton?"

Bush's rambling response revealed nothing, but Kelly's question did. She cut to the heart of the crisis rocking the Republican Party right now — an extremely crowded field with no clear challenger to a powerful outsider who performs poorly in head-to-head match ups against Democrats in the general election. Despite the fact that there's plenty of ideological overlap between many of the lowest-polling candidates, most of which seem to be keen on sniping at each other and waiting until Iowa and New Hampshire to make decisions about whether to suspend their longshot campaigns. All the while, Trump has continued to climb in the polls. In the end, their desperate bids at self-advancement could end up coming at the expense of the party they claim to represent. — Zeeshan Aleem

Carson woke up from a nap toward the end of the debate to field a question about Russia and Vladimir Putin. He made a valiant effort to sound knowledgeable on Eastern European affairs, dropping lines about armored brigades in the Baltic states and military exercises in Estonia and Lithuania.

Carson stumbled, as he tends to do when speaking longer than 60 seconds. In an attempt to make a point about fighting Putin "on an economic basis," Carson made the bizarre claim that "Putin is a one-horse country: oil, and energy," which is incorrect on several levels.

As everyone knows, there are at least seven horses in Russia. — Stefan Becket

10. Rubio made a dumb joke about Bernie Sanders.

Not to be outdone by Cruz's lame maniac joke, Rubio made his own attempt at proving that he had a sense of humor by bringing up the idea of a Sanders presidency.

Witness his fierce wit yourself:

11. Carson had the best closing statement of any debate so far.

He recited the preamble to the Constitution. Enough said.