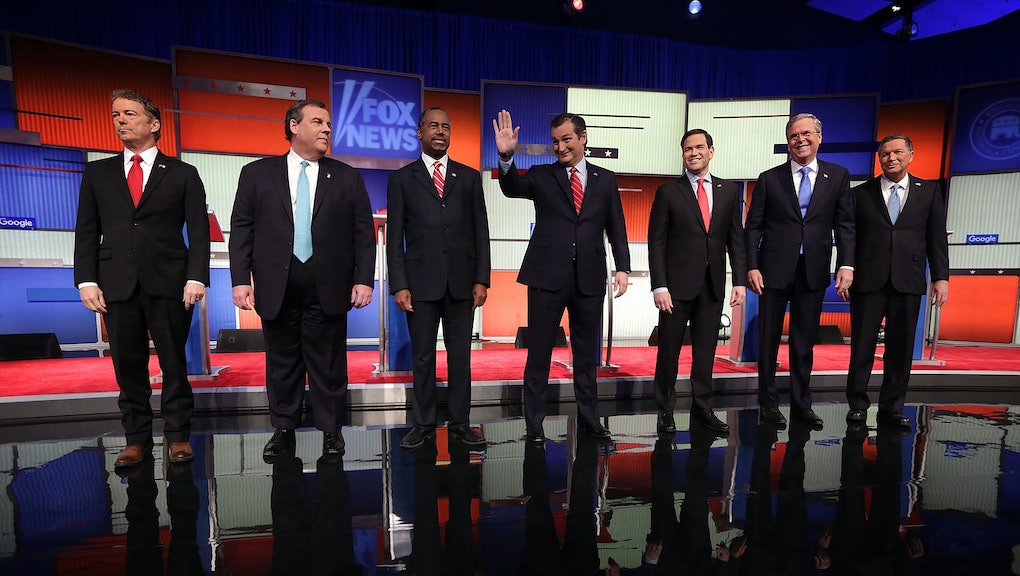 DES MOINES, IOWA — Donald Trump blew off Thursday's big Republican primary debate in a fit of pique, but his shadow loomed over the last televised GOP showdown before the Hawkeye State caucuses on Monday.

Ted Cruz, running second in Iowa per the latest polls, managed to get in a few solid digs at Trump while making a final-stretch pitch for his own candidacy.

"Before we get to the issues, let's address the elephant not in the room tonight," moderator Megyn Kelly asked Cruz as the two-hour debate kicked off. "Donald Trump has chosen not to attend this evening's presidential debate. What message do you think that sends to the voters of Iowa?"

He's a maniac, maniac: Cruz iced Trump with a withering sardonicism that let him keep the tone light — but the critique unmistakable: "I'm a maniac, and everyone on this stage is stupid, fat, and ugly."

"Now that we've gotten the Donald Trump portion out of the way, I want to thank everyone here for showing the men and women of Iowa the respect to show up," Cruz said, painting himself as a nice guy too.

Trump has dominated media coverage of the GOP primary — and plenty of polls — since his June launch.

On Thursday, he opted to spurn Fox and hold a benefit for veterans after months of spiraling criticism of Fox's Kelly, who called him out in an August debate for his past misogynistic statements.

Trump, who has denigrated Kelly as a grudge-harboring "lightweight reporter" and tweeted and retweeted crude and obscene remarks about her, said the coup de grace was the wiseacre comment Fox fired off Tuesday:

"We learned from a secret back channel that the Ayatollah and Putin both intend to treat Donald Trump unfairly when they meet with him if he becomes president — a nefarious source tells us that Trump has his own secret plan to replace the Cabinet with his Twitter followers to see if he should even go to those meetings."

Trump's team crowed that his refusal to debate would crash Fox's ratings — and earnings — for the evening. The network suggested otherwise, but the real-estate magnate literally remained a red-hot topic for much of the debate.

Donald, Donald Everywhere? Cruz and other candidates got into a few intramural skirmishes, but it seemed difficult, irresistible, or both to completely box Trump out of the discussion:

* "If you guys ask one more mean question, I may have to leave the stage," Cruz cracked in yet another allusion to Trump's litany of complaints about media mistreatment.

* "Let's be clear what this is about. It's not about Donald Trump," Sen. Marco Rubio, currently running in third place in Iowa, said in trying to soft-pedal The Donald Factor.

* And Jeb Bush, who skirmishes with Trump regularly, mocked him in absentia: "I kind of miss Donald Trump. He was a little teddy bear to me. We always had such a loving relationship in these debates and in between and the tweets. I wish he was here. Everybody else was in the witness protection program when I went after him..."

Meanwhile, at Drake University: Trump kept busy during the debate by raising $5 million, according to his campaign, for veterans' charities and ponying up $1 million of his own.

Among the groups he listed Thursday night as beneficiaries — after the campaign failed to respond to repeated Mic requests for clarification on how the funds would be spent: Sioux City, Iowa-based Projects for Patriots; Liberty House of Manchester, N.H.; and K9 for Warriors of Ponte Vedra, Florida.

While the two each have an Iowa caucus win under their belts — Huckabee carried the state in 2008, followed by Santorum in 2012 — the latter told reporters not to take it as a sign that he was hanging up his campaign dreams and endorsing the current frontrunner:

Santorum did admit, however, that the long haul felt at times, well, long.

"I feel like I'm running a marathon breathing through a swizzle stick," he said.

Non-membership had its privileges: Yes, Trump's decision to opt out of the Des Moines rumble may have exposed him to the ire of Iowans who expect candidates to campaign for their support early, often and personally because — right or wrong — they cast the nation's first presidential ballots.

On the other hand, not only did Trump avoid having to play his usual center-stage punching bag role for his peers, but he traded having to answer potentially tricky reporter questions for the cheers of the adulatory crowds he much prefers.

Trump also avoided a bumptious protest outside the Iowa Events Center by demonstrators agitating for a $15 minimum wage. The self-proclaimed $10 Billion Man has said doesn't support raising the minimum wage, although he has also paradoxically said he thinks American wages are too low.

After the two-hour forum finished, Cruz advisor Rick Tyler said he was satisfied with his candidate's showing, cheering him for "seven solid debate performances" and telling reporters he felt Trump made a grave tactical error by assuming Iowans wouldn't care if they didn't see him on their televisions:

"Our debates continue to showcase the most well-qualified and diverse set of candidates in the history of either party," Priebus said. "The record level of viewership our debates have drawn is a testament not only to our tremendous field but also the unmatched enthusiasm of conservatives across the country ready to take our country back.

Skipping debates ain't for everyone: As a veteran dealmaker (though neophyte politician), Trump is versed in high risk/reward decision-making. He also doesn't, to wildly understate it, fit the cookie cutter of the traditional Republican presidential hopeful, much less the classic frontrunner.

Said Fox reporter Abby Huntsman, whose father, Jon, is the former Utah governor who sought the Republican presidential nomination in 2012:

Trump is neither the first nor most famous GOP candidate to ditch an Iowa debate: None other than party icon Ronald Reagan did it in 1980. The circumstances mirrored today's: Reagan led in the polls. He let six of his foes tangle on the debate stage without him.

Ultimately, he ended up offending Iowans with the brushoff — and losing the caucus.

Of course, debates and elections in the Reagan era weren't tracked and guided or misguided by today's technology, and if Trump fans were to go by debate-night Google indicators, they might be disinclined to fret.

In fact, a display at the debate site showed Google users pronounced Marco Rubio the victor — and awarded Trump the silver medal.

Kentucky's Rand Paul, in his return to the primetime stage after refusing to be relegated to the "kiddie table" in the Jan. 14 GOP debate in North Charleston, came in third, just ahead of Cruz.

What does it all mean for Monday? Anyone who tells you they know for sure is messing with you.

Some of the campaigns told Mic they're confident in their get-out-the-vote operations — those painstakingly crafted layers of persuasive phone banking, door knocking by foot troops, advertising, endorsements and whatever else it takes to get Iowans to their caucus sites —and registered to participate, if necessary. Others won't say.

A successful caucus bid has a lot of moving parts — and even the most fervent "You've got my vote!" does not guarantee another warm body at the caucus.

Oh, and just to make it extra complicated? The forecast for Monday: snow.