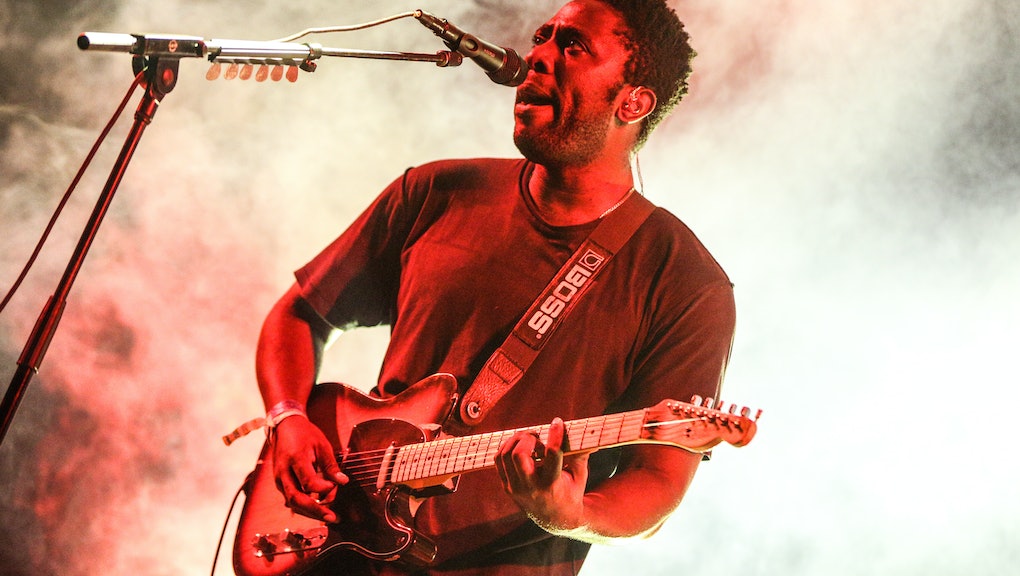 London-based mega rock outfit Bloc Party has released its fifth studio album, Hymns, and beginning Friday the LP is available for streaming online through Spotify. For longtime fans of the inventive British alt-rock band, an outfit that dates back to 2003, Hymns may not sounds all too familiar. Yet the group, which has proved it's no stranger to reinvention during its more than a decade's worth of work, has produced a record that's at least consistent with the theme of growth and change, which is a topic Bloc Party is also familiar with given its band member switch up in past years.

Lyrics: True to its title, the lyrics of Hymns begin on hallowed ground. "Lord, give me grace and dancing feet," frontman and vocalist Kele Okereke sings on the album's opener. "As I conquer all anxiety / The angel told me not to fear / The power tools in me / For I have learnt the way to pray / Like a missile growing tall now."

In fact, spirituality is a thread that Bloc Party uses as connective tissue for the record's varying themes.

On "The Good News," a slower-stewed track about loss, Okereke sings, "My pastor tells me that my light is dimming and I've been too long drifting / In a ocean / It's okay / You just need faith / Been looking for answers / In the wrong place / But how do I tell him that there / There's something missing? / And I don't got no substance / Since you've gone."

"People think bands breaking up is sexy but often it's super mundane, like not flushing the toilet or washing up" Okereke told NME of the split. "It's often not about the flashpoints but deep-seated issues. It was [change] or stop. I love what I do, so they had to go."

Judging by Hymns' aesthetic, that turnover has had an apparent effect on the group's sound. "The Love Within," for example, is a far cry from the band's post-punk sound on, say, 2004's "Banquet." Yet perhaps that evolution is a not only a sign of the times, but a sign of positive change for a group that's already proven it's willing to reinvent itself rather than quit.

And it seems fans are onboard, despite the record's less-than-ideal five out of 10 rating from Pitchfork. Reacting to a post about Hymns on the group's Facebook page, fans of the band were supportive of Bloc Party's new angle. "Hymns is beautiful, other-worldly, magical," wrote one user. "Bloc Party reinvented once again."