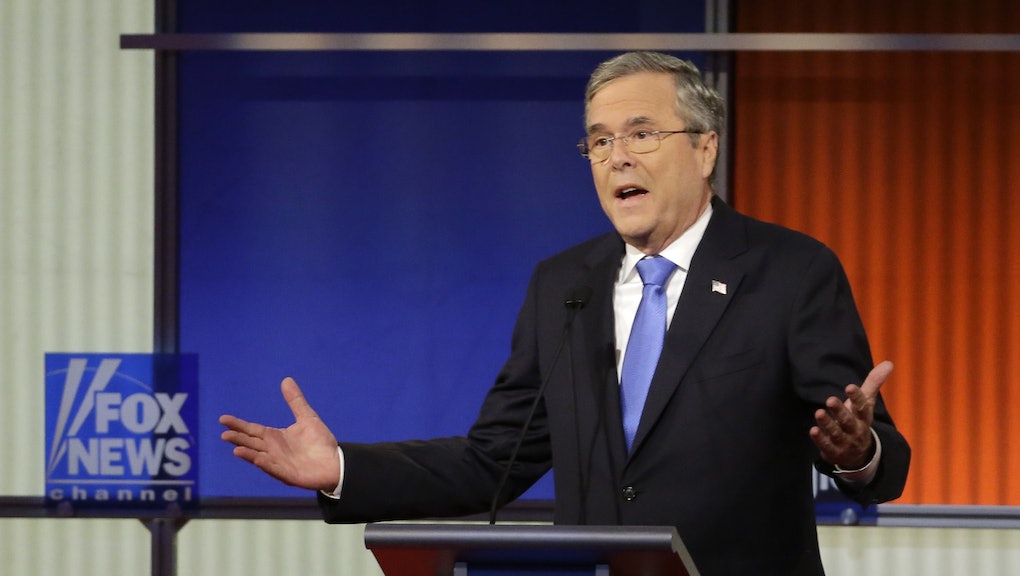 This Is How Jeb Bush Said He'll Handle Islamophobia If Elected

Donald Trump has not only led the race for the GOP presidential candidate nomination, but he has also been the undeniable center of attention at the many debates held over the past few months. His absence at last night's debate allowed the hopeful nominees left in his wake to share their insights into pressing matters — like rising Islamophobia in the United States, which Jeb Bush tackled head first.

In a video broadcast during the debate, Muslim beauty blogger Nabela Noor noted that hate crimes against Muslim Americans tripled in 2015, and Islamophobic hate speech has also grown.

"As president, what would you do to address this toxic climate and promote increased tolerance in the United States?" Noor asked, according to ThinkProgress.

While other candidates like Trump have proposed banning Muslim Americans, Bush noted that such hostility "creates an environment that's toxic in our own country," ThinkProgress reported.

Muslim American citizens, like Noor, " should not feel uncomfortable" about their American citizenship, Bush continued. These citizens, he added, "are not the threat. The threat is Islamic terrorism. We need to focus our energies there, not these broad-blanket kind of statements that will make it harder for us to deal with it."

"I was pleased that Jeb Bush answered my question with respect and didn't dodge the question," Noor told Mic's Rachel Lubitz in an email Friday. "I also appreciate that he mentioned that blanket statements do not help, and in fact hurt this country and its people. I wish more candidates jumped in, but maybe they will voice their thoughts publicly soon."

Bush's words are a necessary reminder to the many Americans who have attempted to make Muslim Americans "uncomfortable" — or blatantly threatened. In 2015, multiple mosques were attacked across the country and Islamophobic attitudes were reported everywhere from college campuses to city streets. A 2015 YouGov poll found that public opinion backs these actions: 55% of Americans surveyed had a somewhat or very "unfavorable" opinion of Islam.

Though his comments last night were encouraging, Bush's past actions undermine this sentiment. In November, the former governor told a New Hampshire talk show that the United States should enforce a religious test for Syrian refugees and only grant access to those determined Christian, according to ThinkProgress. Last March, a coalition of Muslim organizations also noted that Bush employed a senior consultant who supports "anti-Muslim legislation and Islamophobic causes," according to the Daily Caller.

"I think it's important for us to be careful about the language we use," Bush concluded Thursday night, effectively verbalizing advice he, as well as his fellow hopeful nominees, would do well to follow.