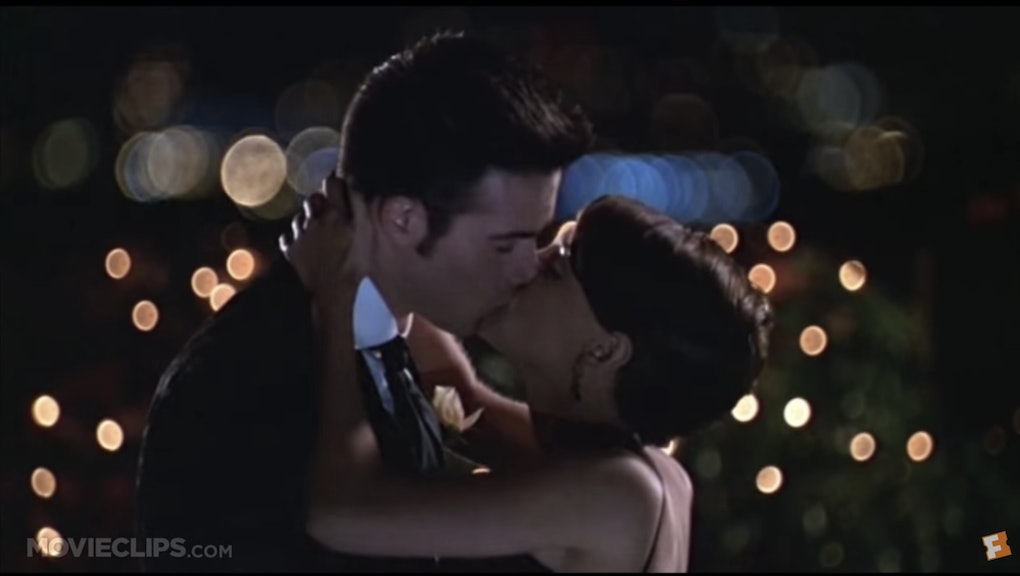 Like, let's talk about She's All That. Popular jock Zack (played by a young, delicious Freddie Prinze Jr.) spends the entire movie harassing an artsy outcast girl, showing up at her house unannounced and dragging her to parties she doesn't want to attend. And somehow we're all just like, "Aw, sweet!" But if someone did that IRL, shit would get real restraining order-y, real fast.

A study making the rounds this week has called this phenomenon out, suggesting that rom-coms could actually have some dangerous implications when it comes to real women and (literal) stalkers.

The new findings come to us from the University of Michigan, Ann Arbor and were published in the journal Communication Research. Researcher Julia Lippman conducted an experiment in which women were shown two different types of movies: some that depicted "persistent pursuit" (i.e. the Prinze-like behavior in She's All That) as something to be afraid of, and others that portrayed it as something that is sweet and romantic. She found that the type of movie they watched had an influence on their perceptions of IRL stalking behaviors.

"Exposure to a film that depicted persistent pursuit as scary led participants to endorse fewer stalking-supportive beliefs," Lippman wrote in the study. "[T]he romanticized pursuit behaviors commonly featured in the media as a part of normative courtship can lead to an increase in stalking-supportive beliefs." (Mic has reached out to Lippman for further comment and will update if we hear back.)

In other words, the influence of romantic comedies can lead some women to excuse creepy, stalkerish behaviors in some men. Because it's romantic and shows that they care!

For examples beyond She's All That, please refer to such titles as There's Something About Mary (spying on Cameron Diaz with binoculars — *aww*), Twilight, (breaking into Kristen Stewart's bedroom while she's asleep — *swoon*) and Love, Actually (showing up to Keira Knightly's house unannounced and bombarding her with creepy poster board notes — *drops panties*).

"Surely this isn't the first time a study has sought to debunk the bullshit depictions of love presented in most romantic comedies," you may be thinking to yourself. And you would be correct. Back in 2008, researchers at Heriot Watt University in Scotland determined that the rom-com genre is basically just one big Unrealistic Expectation Factory.

Bjarne Holmes, PhD, led a team of researchers in analyzing 40 romantic comedies, while also having more than 100 participants watch Serendipity while another 100 people watched a David Lynch drama. Based on survey responses, viewers in the first group emerged with oversized boners for ideas like "fate" and "destiny."

"Marriage counselors often see couples who believe that sex should always be perfect, and if someone is meant to be with you then they will know what you want without you needing to communicate it," Holmes said of the study's results. "We now have some emerging evidence that suggests popular media play a role in perpetuating these ideas in people's minds. The problem is that while most of us know that the idea of a perfect relationship is unrealistic, some of us are still more influenced by media portrayals than we realize."

So whether it's perpetuating the myth that stalking is NBD or the notion that true love is a 24/7 bonanza of feeling perfect all the time, romantic comedies clearly DGAF about the reality of being in a relationship. Did we need a study to tell us this? Probably not, but it still may be worth bookmarking this article for every time you revisit She's All That and find yourself succumbing to the hypnosis that is Freddie Prinze Jr.'s dangerous 'n deceptive little smirk. IT'S ALL A LIE!