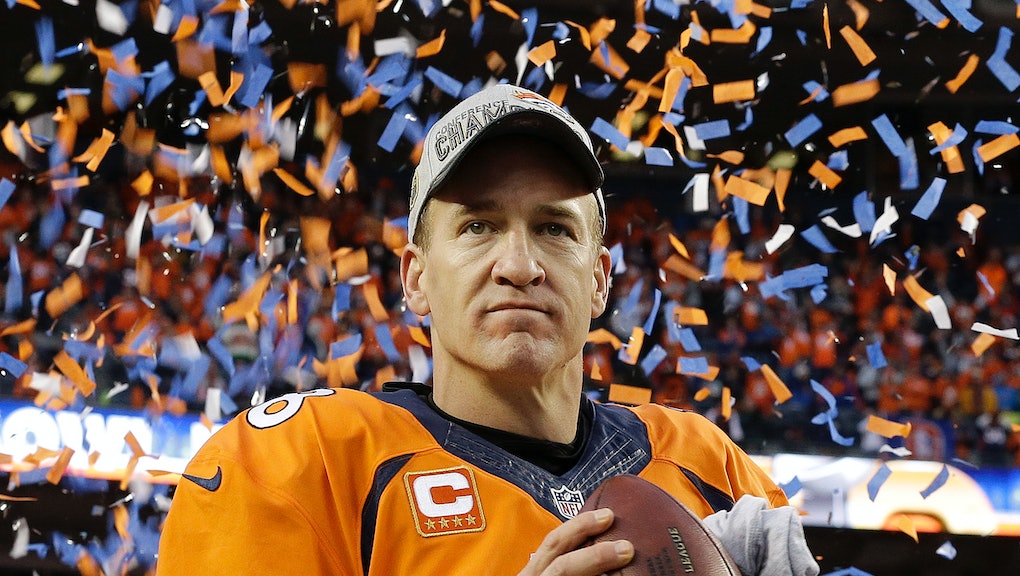 With Super Bowl 50 fast approaching, a lot of talk has centered around Carolina Panthers quarterback Cam Newton. The fifth-year player is entering his first Super Bowl off the heels of a dominating 15-1 regular season, where he accounted for 45 touchdowns. However, much of the recent Newton talk has unfairly centered on his excessive dabbin' celebrations, with some Twitter users calling the quarterback's demeanor "arrogant" and, in some cases, labeling him a "thug."

On the other side sits the Denver Broncos and their 39-year-old quarterback, Peyton Manning. The media attention thus far has focused on whether this is Manning's "last rodeo" in the NFL — a final chapter in what has been a storied and Hall of Fame-worthy career. What doesn't fit this narrative, and what hasn't come to the forefront of the pre-Super Bowl hype, are the human growth hormone allegations surrounding the quarterback.

The Manning HGH controversy: The Manning controversy began in December, when Al Jazeera released a special report, The Dark Side: Secrets of the Sports Dopers, the result of a eight-month investigation on the global epidemic of sports doping.

Where Manning plays into the report is when Liam Collins — a British hurdler who the network tapped to go undercover for the investigation — meets with American pharmacist Charlie Sly, who had previously worked at the Guyer Institute in Indianapolis in 2011. At the time, Manning was still a member of the Indianapolis Colts, and was recovering from a major neck injury — one that could have ended his career prematurely, and caused him to miss the entire season. Sly said he was part of a medical team at the clinic that provided Manning treatment for the recovery process.

Sly claimed the clinic provided Manning with HGH – which was banned in the NFL in 2011 – and had everything allegedly mailed using his wife's name as a way to avoid any association with the drug. "All the time we would be sending Ashley Manning drugs," Sly said, during a secret recording by Collins in the report. "Like growth hormone, all the time, everywhere, Florida." Sly added that Peyton Manning allegedly would also go the clinic after hours for additional treatments.

Manning did not take the report lightly, calling it "complete garbage" in a statement provided to USA Today.

"The allegation that I would do something like that is complete garbage and is totally made up," Manning said in the statement. "It never happened. Never. I really can't believe somebody would put something like this on the air. Whoever said this is making stuff up."

Since the report was released, the head of the clinic, Dr. Dale Guyer, has denied Sly's employment at the institute, instead calling his tenure at the clinic a "brief three-month internship in 2013," which also wouldn't have coincided with Manning's tenure with the Colts (by then, he was with the Broncos). Additionally, Sly refuted the claims he made in a video posted to YouTube. However, in response, Al Jazeera provided video evidence of a phone call with the clinic, where they verbally confirmed Sly's employment in 2011.

Regardless, Al Jazeera's investigation is somewhat damaged by the refuted claims, as well as the network's reluctance to release the name of a second, anonymous source that corroborated Sly's information.

However, Peyton Manning and the clinic haven't specifically denied the allegation that Ashley Manning received HGH from the institute, which is — at the very least — suspect. Naturally, questions also arise as to why Ashley Manning would, hypothetically, use HGH. According to the Al Jazeera report, there are three main reasons for doctors to prescribe HGH to adults: growth hormone deficiency, short bowel syndrome and HIV wasting, none of which have been publicly associated with the Manning family.

It's enough for the NFL, MLB (baseball players were also accused of doping in the report) and the U.S. Anti-Doping Agency to begin a comprehensive investigation of the network's report, though it will not be completed by the end of Super Bowl 50. In other words, if Manning were to retire after — and, even win — the Super Bowl, it would likely tarnish his post-career legacy, rather than affect his playing career.

How the media has talked about Manning versus Newton: Mainstream sports media outlets have largely backed Manning in the aftermath, repeatedly questioning Al Jazeera's credibility instead of the source material. "Al Jazeera is not a credible news organization," ESPN analyst and NFL Hall of Famer Mike Ditka said, according to the Boston Globe. "They're out there spreading garbage. That's what they do, yet we give them credibility by talking about it."

In the meantime, the league approach to the story has been glaringly hypocritical. Allegations did not stop the NFL from thoroughly investigating the now-infamous "Deflategate" scandal with the New England Patriots and quarterback Tom Brady — which, even if it were true, the deflating of footballs has to be considered a lesser offense than doping.

Are his celebrations overly excessive at times? Football fans are certainly entitled to think that, however his actions are inherently harmless, particularly when compared to the allegations against Manning. "Those who want to tell us Manning is as wholesome as a fresh snowfall because he sings to his chicken parm and has mastered an aw-shucks demeanor have seized the stage," Chad Finn wrote for the Globe.

The fact that Manning's report, even alleged, has been mostly swept under the rug before the Super Bowl is indicative of a larger problem with the NFL, sports and the media outlets that cover it.

Check out the full Al Jazeera investigation below: