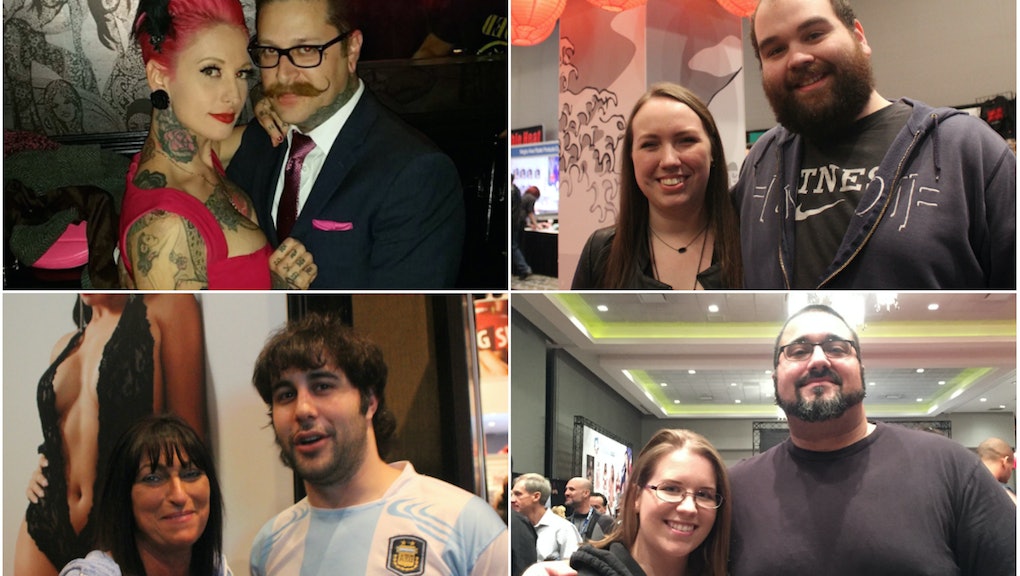 Mixed in with the crowd of lingerie-clad cam models and, yes, countless men of all ages — most of whom were flying solo save for the stacks of pornographic photos they clutched, hoping to get autographs — were scores of couples wandering the floor. Many held hands as they introduced themselves to their favorite performers, while others took turns checking out the newest technologies to sweep the adult world. It seemed that, surrounded by a celebration of sexuality, most of the couples had never felt closer.

Mic: How'd y'all end up at the convention?

A: Yeah, because we don't really have an issue going, "I want to try what they're doing." And then if it sucks, we're really open with each other to be like, "That was terrible. We're never going to do that again."

A: Yeah, I know I am ... just aware that they're fucking for a camera and a paycheck, and when we have sex it's more intimate. There are times when we just fuck. But a lot of the times, it's intimate.

K: It's not so much the looks or the aesthetic of it. There are certain things that look great on camera, that just don't do anything—

A: Yeah, that just don't translate at all.

"[I'm] aware that they're fucking for a camera and a paycheck, and when we have sex it's more intimate."

Mic: What made you decide to come to the convention?

J: We're fairly new to it. But the fantasies that I have, I want to experience them with her.

K: I think he didn't think I would be going for it, and I think I might've surprised him a little bit by playing into it more than he thought at first.

B: She liked it a lot. Now she's just totally open.

Do you feel like it has helped you be open generally or simply in the context of a relationship?

B: It's made her more comfortable.

Jessie and her boyfriend, Marcus, weren't typical attendees: Jessie is Jessie Lee, a performer for the company Burning Angel, founded by her close friend Joanna Angel. Marcus, however, is what's known in the industry as a "civilian," someone who doesn't work in the industry.

Marcus: Experience speaks volumes. I mean, I may not be in the industry, but I can guarantee you I've probably had more sex than she has.

What has that meant for your relationship?

J: Well, when I start dating a guy I hold out; I don't have sex right away. I waited like a month with Marcus? Maybe a little over a month? We actually were talking about sexual experiences, and he was talking about how many girls he's had sex with, and I was like, "Wow, that's really hot." So I had sex with him that night for the first time. Because that's what I like. I like a guy who's experienced.

New parents Miranda and Thomas had never attended the adult expo before, despite having lived in Las Vegas for several years. When Thomas won tickets to the convention, he and Miranda decided to go together for the first time.

Mic: How did you feel when you got the tickets? Did you think this was going to be weird?

Thomas: No, actually, I just thought, "Well, we'll go check it out." It'll probably be interesting to see. I've been [in Las Vegas] for so long and never checked this out.

Miranda: He actually invited some of his guy friends and they refused to come.

T: They backed out. They thought it would be uncomfortable.

Do you feel like you've learned anything being here?

M: There's no shame here, but I kind of love it.

T: I like how open everybody is. They're not closed off.

M: All walks of life are here. It hasn't been trashy. I think I had it set up in my mind that it was going to be trashy, but it's pretty clean and, understanding what it is, it's actually pretty interesting.

T: We talk about it rarely, I guess. I think after this it'll probably open us up a little bit more.

M: Seeing different ideas of what people are into, it opens up more room for discussion of where we can go. When you've been together for so long — we've been together seven years — I guess you look for new things to spice things up. I think this will start a conversation.

Do you think that you would feel the same way if you hadn't come with a partner? Or even if you had come alone, if you didn't have a long-term committed partner, do you think it would leave you feeling the same way, with the same willingness to try new things?

M: I think so. But I think it's almost mentally different when you're with a partner, because you want to try something that you're both interested in, versus if you're by yourself maybe you're a little more letting your freak flag fly, that kind of thing. It's more — when you're in a relationship, it's, "What do we like here?" and, "What are we going to try together?"