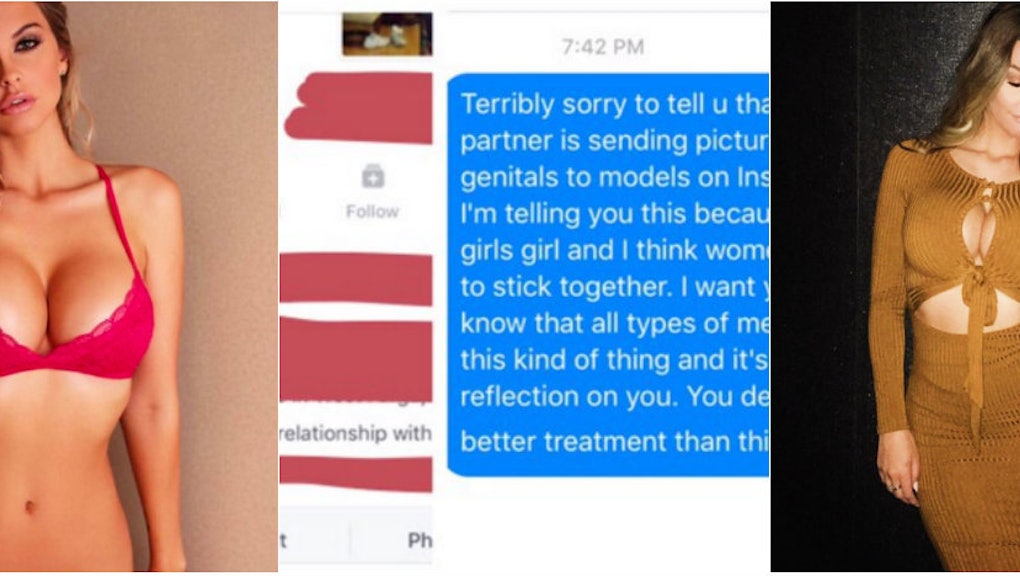 If we've said it once, we've said it a thousand times: Unsolicited dick pics are rude and disrespectful and bad. That's why model Emily Sears is taking a stand against them.

In a new interview with BuzzFeed, Sears, a model with approximately 2.3 million Instagram followers, revealed that she receives at least one dick pic a day from rando strangers on social media, which are often accompanied by inappropriate messages.

Appalled by the constant stream of harassment, she eventually devised a plan to clap back at the creeps who barge into her DMs with poorly lit close-ups of their nasty lil' weenies. A plan that involves reaching out to the dudes' girlfriends (side note: how do these guys have girlfriends?) and informing them of their BFs' extracurricular activities.

"I was inspired by my friend Laura. She had shown me that she was doing this [on Instagram], and from then on I followed her lead," Sears told Mic in an email. "It's surprising that these men think they're anonymous in my DMs when a quick Google search of their username can put me in direct contact with their girlfriends, wives, family members, even school teachers!"

Since she started telling her followers about her new dick pic policy, the number of messages she receives has decreased.

"I think the message here is for people to be accountable for their actions on social media, and remember if they wouldn't say things in person they shouldn't say them online," Sears told Mic. "This type of harassment is happening to all types of women, not just models with a following, and it really isn't okay."

Indeed, Emily and Laura aren't the first pair of ladies to combat this gross phenomenon by forwarding the pictures to the mens' loved ones (lol, these men have loved ones). Back in 2013, this savvy gal sent a dude's dick pic to his mom.

"She should know how you perpetuate rape culture," she told him before sending a photo of his penis to his mom. "I am sick of being treated like this."

Another woman to take a stand? Debra Messing of Will & Grace and Smash fame, who posted a poignant tweet back in December after a follower thrusted his member into her DMs.

Since Sears' story was picked up Friday morning, it has garnered quite a bit of internet attention. She told Mic that she's been encouraged by the overwhelmingly positive tone of its reception. She even heard from one of the first women she'd reached out to regarding her boyfriend's cyber-harassment habits.

"She found out her partner had sent these messages and vulgar pictures to four other models and broke up with him," Sears said. "She said he was abusive and thanked me for being free of him now."