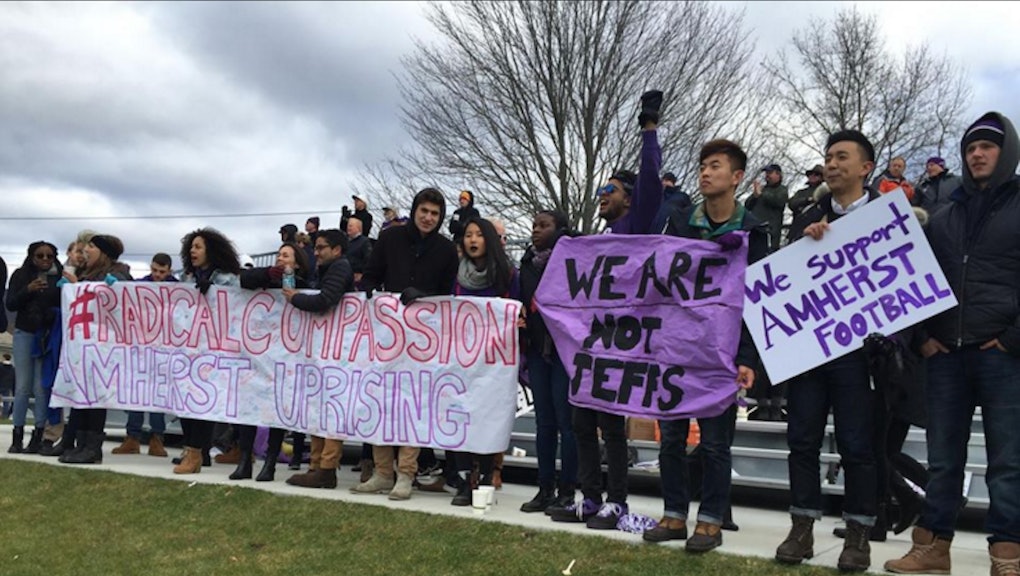 On Tuesday, the Massachusetts-based Amherst College board of trustees decided to eliminate the use of their college's unofficial mascot, Lord Jeffrey Amherst, a notorious murderer of Native Americans. And though the college's decision to formally disassociate itself from its long-time mascot is supported by a majority of students, a vocal minority is making its dissent known.

Lord Jeff — as he's affectionately referred to and after whom the college and its town are named — was an infamous colonial man of the military. He made a name for himself by distributing smallpox-infected blankets to Native Americans in a (successful) effort to help eliminate the indigenous population.

"You will do well to try to inoculate the Indians by means of blankets, as well as to try every other method that can serve to extirpate this execrable race," he wrote in a letter to Colonel Henry Bouquet in 1763.

For some reason, the majority of the Amherst student body didn't find Lord Jeff's imperial, genocidal tendencies terribly palatable. A student-helmed movement to oust Lord Jeff as their mascot began with a library sit-in on Nov. 13.

In the wake of the demonstration, a poll was taken of current students and alumni respectively, revealing that the majority of both groups disapproved of the unofficial mascot. The results were published on the college website and a community Facebook page, entitled "The Moose: A New Mascot for Amherst College."

"Amherst College finds itself in a position where a mascot — which, when you think about it, has only one real job, which is to unify — is driving people apart because of what it symbolizes to many in our community," Cullen Murphy, the chair of the board of trustees, wrote in a statement on behalf the board on Tuesday.

"If [students] find the mascot offensive regardless of anyone's intentions — and they truly do, and have spoken about this in very personal terms — then that is a significant reality and it needs to be taken seriously," Murphy adds. "This is not about political correctness; it is about present community."

The university will cease to use their blanket-loving friend in all official communications and messaging and it will rename the on-campus Lord Jeffrey Inn.

However, the move was not without resistance. One anonymous person responded to an op-ed in the student newspaper, the Amherst Student, on the subject with the following comment:

"The one student I know who left a comment on the student newspaper not in favor of the change received a lot of flack," Khalil Flemming, a senior at Amherst involved with student activism, told Mic. "He was kind of ostracized."

"But, interestingly, a lot of students on campus still do vehemently support Lord Jeff, for the sake of tradition, they say," Flemming added. "For me, it's hard to understand."

"It's a symbolic victory because it shows students can actually enact change. Just the fact that you're reaching out to current students to ask, 'What do you think about this?' is a really good sign."

Mercedes MacApline, another student at Amherst and active member of the group Amherst Uprising, told Mic the change in discourse and consciousness is perhaps one of the most important things to emerge from the controversy.

"It's hard to explain how valuable that shift in discussion is and the feeling on the ground, where people are truly showing that level of compassion," MacAlpine said. "It's such a strong, positive sign; I think we're on a good track."

MacAlpine also believes the campus fight for abandoning the unofficial mascot served as a microcosm for the country, struggling with its own sense of identity. Whitesboro, a village in upstate New York, for example, voted on Jan. 11 in favor of keeping their seal, depicting a white man choking — or "wrestling" — a Native American.

"It's a matter of asking ourselves as a country the same questions we ask ourselves on the community level," MacAlpine opined. "'Who do we want to be?'"