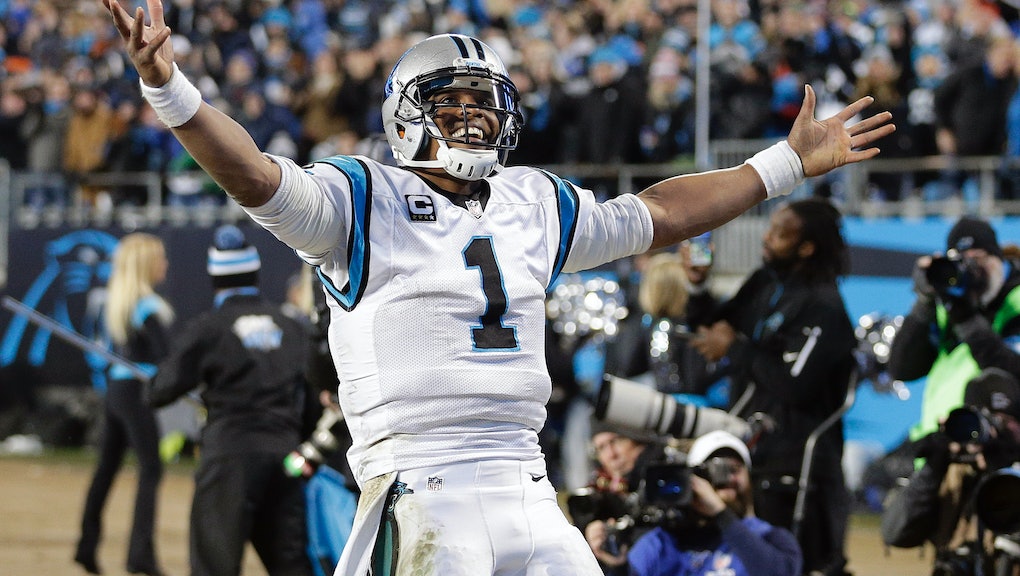 What Cam Newton Is Criticized for Doesn't Apply to White Quarterbacks

Carolina Panthers quarterback Cam Newton has led the Panthers to their second ever Super Bowl appearance — the first since Newton was drafted by the team — and is widely considered the favorite to win the NFL's MVP award this season. However, media narratives of Newton extend beyond his on-field success, with criticisms of his character put into question, while social media's been divided over whether his celebratory antics make him a "thug."

"Newton has been a lightning rod for criticism for much of his career," David Newton wrote for ESPN. "He was called immature and moody during his first couple of NFL seasons because he sometimes sat alone on the sideline with a towel over his head when the team was losing. He's been questioned for a lack of leadership. He's been questioned for his dabbin' and dancing after scoring touchdowns, for taking photos of teammates at the end of a blowout win."

This label that Newton has carried has demonstrated an unfair bias toward the quarterback — one where white quarterbacks haven't received the same spotlight even when they've displayed what could be considered unsportsmanlike conduct.

The preconceived notion that Newton's actions, and really, any intense form of emotion, could be perceived negatively based on race is backed up by general stereotypes of black athletes. "It's the 'illusory correlation' theory," Cynthia Frisby — associate professor of communications at Missouri who has studied stereotyping of black athletes — said in an interview with USA Today published Friday. "When you have a minority or somebody that stands out, you tend to make correlations that are usually wrong ... because it fits in with our typical stereotypes. So if you already think blacks are showy or entertainers and then we see Cam dancing, we think that he's showing off. Whereas I can excuse the white player because that doesn't stand out."

This can be attributed as to why Newton's dabbin' and his Superman celebration can draw so much ire, while a white quarterback, like Aaron Rodgers, won't receive the same backlash for his championship belt celebratory pose. Instead, he's featured in a popular series of State Farm commercials, which coined a term for the move: "Discount Double Check."

Similarly, Arizona Cardinals quarterback Carson Palmer was fined by the NFL for using a crotch-chop celebration after a score, in the direction of the opposing team's fans. Rather than hold Palmer accountable, an Arizona radio station created a GoFundMe to pay the fine, called the "Carson Palmer Thrust Fund." In total, fans donated $2,270.

"Carson Palmer can crotch chop fans and no speaks on it at all," Robert Littal wrote for Black Sports Online. "Ronda Rousey doesn't touch gloves and people still feel sorry for her because she lost. Black man doing a dance in the crowd? He must be a thug, ghetto and a criminal in our society."

It's a particularly arduous task for Newton because so few black quarterbacks have been in his position — he's only the sixth black quarterback to even appear in a Super Bowl. The first one to do so, Doug Williams, said he believes racism is an underlying reason for the criticism directed his way, whether it's openly admitted or not. "I think Cam is mature enough, he knows what he's up against," Williams said in an interview with USA Today. "He knows what he has to deal with ... He's got a right to understand that [race] could be one of the problems."

What Newton's recent success has exposed is an inherent racial issue with the portrayal of black athletes in the NFL by media and fans, which is amplified even more by recent changes in the political and social spectrum. "Even the suggestion of intolerance was off-limits until [Republican presidential hopeful] Donald Trump started advocating it on a daily basis," Nancy Armour wrote for USA Today. "That's the real danger of bias and bigotry, however. They are deep-seated, embedded so far down in our consciousness we don't even realize they're there. Until someone like Newton comes along to expose them."