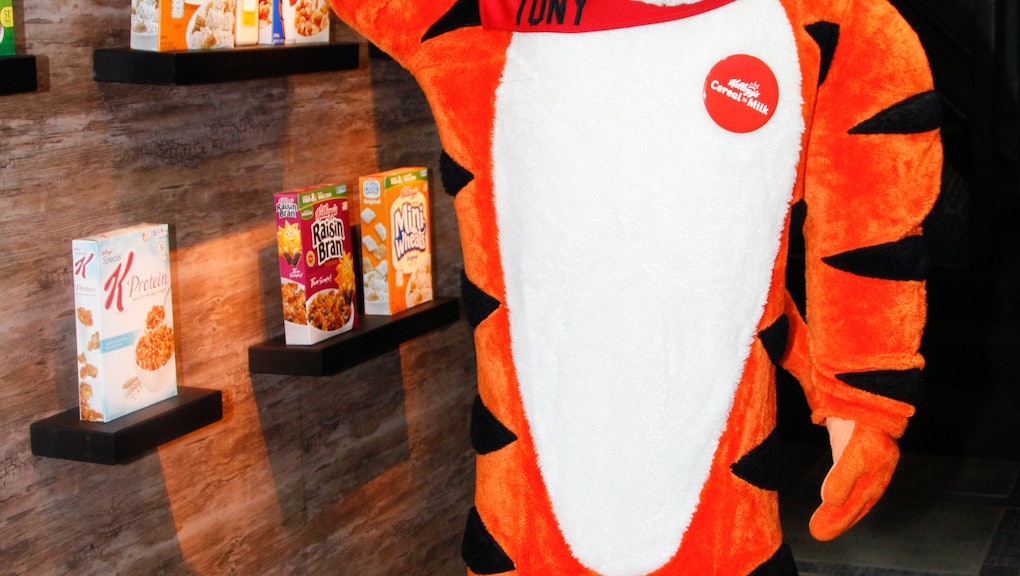 Webster's Dictionary defines "furry" as "consisting of or resembling fur."

But one community of people has taken that concept, well, further: furries. You may have heard of them.

What you may not have heard of, though, is the select group of furries who have taken it so, so, so much further.

Tony the Tiger, the beloved Frosted Flakes cartoon, may have begun life as a family-friendly mascot for the "Gr-r-reat" sugary cereal. But on Twitter, the 65-year-old spokescat has been drawing the affections of the furry community more and more.

Furries — a subculture of people drawn to anthropomorphic animals, in many cases sexually — have come to the forefront thanks to, of all things, an ongoing Tony the Tiger trolling campaign.

The sexual trolling — while ostensibly in "good humor" — earned a public rebuke from the tiger.

And when that didn't work, Tony, like any cyberbully victim, resorted to blocking.

"It started, like many meme entities, with a joke," Ray*, a 20-year-old furry from New England who joined in the troll-fest, told Mic. "It snowballed from there. One person started and many followed, until pretty much everyone in the Furry community snickers when you mention Tony."

The event took an unexpected turn when another junk-food icon, Chester Cheetah, got pulled into the bacchanal. Unlike Tony, though, Chester saw an opportunity to broaden his audience, and took it.

But, Ray said, Chester was little more than a rebound for those disheartened by Tony's cold shoulder.

"I don't know as many people who are as interested in Chester as they are in Tony. It's a different kind of appreciation," Ray said. "Chester is that smooth guy on the playground everyone respects and maybe some people crush on, but it is less common."

But why Tony the Tiger? Christian*, a furry and a mechanical engineering student from Massachusetts, cited the rise of "dad bod." "There has been a growing popularity of the 'dad bod' and father figures in general," Christian told Mic. "The character has traditionally been a 30- (40?) something-year-old, buff, athletic figure with a deep, booming voice and strong personality."

Both Ray and Christian said the Tony incident was characteristic of the community's penchant for irreverence, and expect it to blow over quickly. Both, however, said they were bothered by how far some took the joke and that members of their community could have exercised better judgement.

"While any kind of harassment is definitely not permissible it's a difficult situation. Tony doesn't exist. He's a mascot, a cereal-selling tiger," Ray said. "I think there needs to be more respect on the part of us furries, along with everyone else."

*Both Ray and Christian requested Mic withhold their last names from this story.