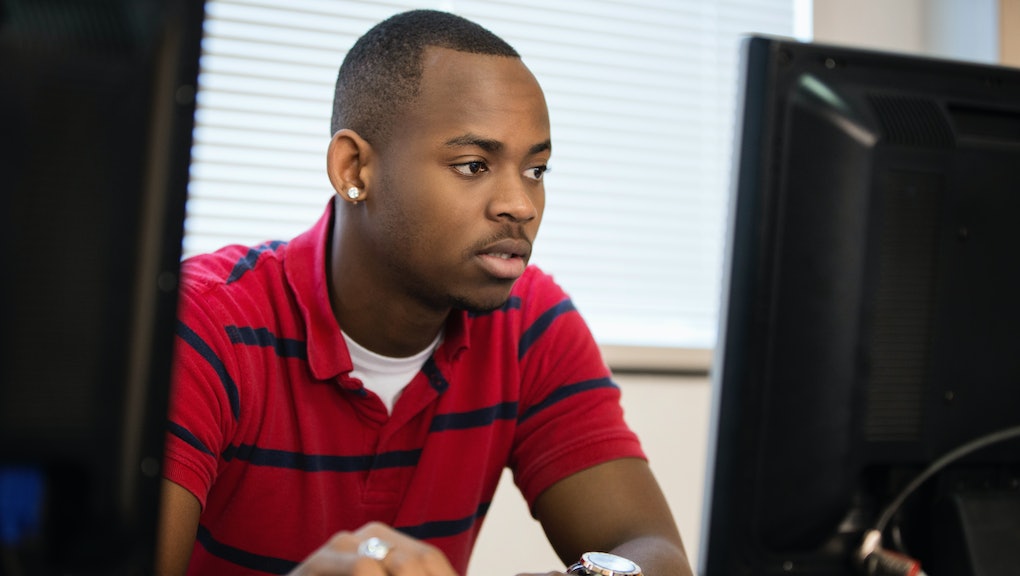 Run-ins with the criminal justice system have all kinds of long-term consequences. A criminal record makes it much harder to secure a job. It can pose a serious obstacle for someone searching for housing. And now some groups are looking into the way it could be interfering with the college admissions process.

The Lawyers' Committee for Civil Rights Under Law is investigating 17 universities across the South that ask some particularly probing questions about applicants' criminal history, according to the New York Times. The advocacy group is looking into how those questions can have an unfair impact on the admissions prospects of minority applicants, given the fact that they're disproportionately stopped by the police and more likely to face penalties for violating the law.

What's particularly noteworthy about the questions posed by these colleges is that they ask not only about criminal convictions but also about arrests and charges, regardless of whether or not they resulted in convictions.

As the Times notes, there's evidence that admissions officials consider criminal backgrounds, even for misdemeanors, to be a mark against a student. While it's easy to understand why a university would be interested in trying to determine a prospective student's likelihood of having disciplinary problems while attending their institution, the problem is that — like with so many other qualities colleges try to select for — there isn't a level playing ground for all applicants.

One 2014 analysis by USA Today found that black Americans are arrested at 10 times the rate of nonblacks at scores of police departments across the nation. A black person is nearly four times as likely to be arrested for possessing marijuana as a white person, even though they use the drug at similar rates. And black and Latino offenders tend to receive significantly harsher sentences than white offenders for similar crimes.

The Common Application, which is used by hundreds of colleges, asks a less expansive question when it comes to criminal records, inquiring only about convictions. But it also asks about "serious disciplinary action" in school, according to the Times. In this realm too, there's evidence of a huge racial disparity in the way students are treated. Strict school punishments ranging from suspension to arrest are much more likely to be meted out to black students than white students.

Why it matters: The broad purpose of affirmative action in higher education is to counteract the various ways in which institutional racism interferes with merit-based admissions systems, and racial discrimination in the criminal justice system would be a perfect example of that. But some legal observers suspect that affirmative action policies could be seriously weakened by a forthcoming Supreme Court decision.

There's also a question of whether or not these kinds of questions play a role in discouraging minority students from less privileged backgrounds from applying at all. They could be correctly estimating that their run-ins with the law count as a strike against them, and become less inclined to apply to more selective colleges as a result.

One reform could be to create a standard of only asking questions about convictions and dropping inquiries into arrests unaccompanied by convictions. Perhaps colleges could even go without asking about lesser convictions that aren't related to violent activity — how seriously do we need to take a teenager's fine for urinating in public? Chances are if somebody is truly dysfunctional, it will manifest in their academic performance and recommendations (or lack thereof) as well.

There are no clean fixes here, and the problem begins well before someone's application arrives in a college admissions office. It mainly serves to highlight how urgent it is that the country tackles some serious reforms in the way that the criminal justice system engages with citizens of color. Being more likely to be arrested or roughed up or sent to prison is only the tip of the iceberg when it comes to an overly invasive law enforcement regime.