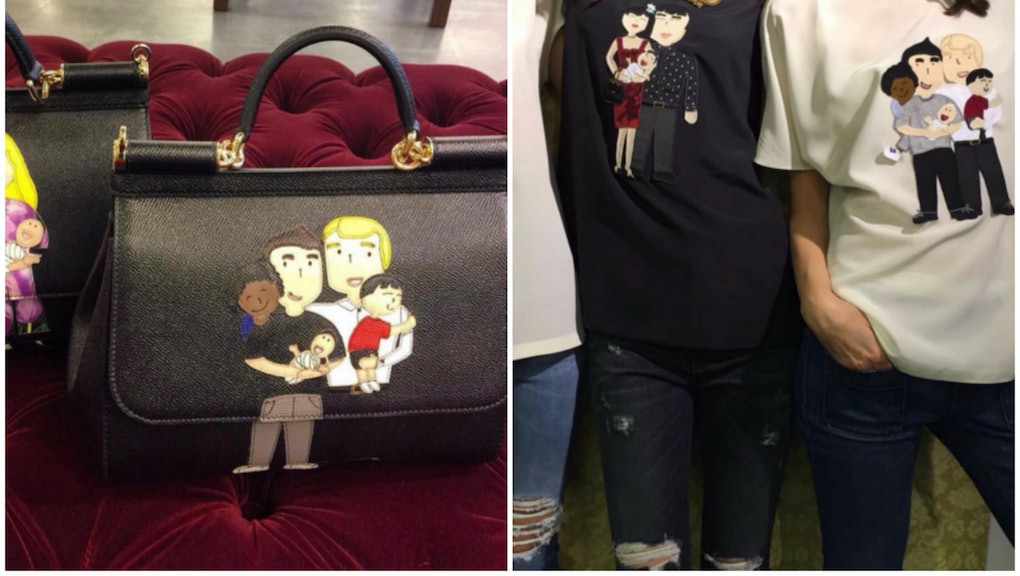 Dolce & Gabbana Made Purses to Celebrate Same-Sex Families, and They're.... Interesting

Luxury fashion brand Dolce & Gabbana is proudly in support of same-sex families, in case you didn't know. And to honor this lovely fact, the company has released a new line of shirts and purses that, literally, have cartoon same-sex couples on them.

Yes, these items are by Dolce and Gabbana, the same company responsible for red carpet dresses and some of the most elaborate fashion shows of all time. Even though they may look like they came from, say, an elementary school bulletin board.

Designers Domenico Dolce and Stefano Gabbana posted photos of the line on their Instagram without commenting on the inspiration for the new products. But notably, such open support for same-sex parents seems to mark a change of heart for Dolce, who made inflammatory remarks to the Italian magazine Panorama in 2015: "We oppose gay adoptions. The only family is the traditional one." During the same interview, Dolce even targeted the children specifically, calling them "children of chemistry, synthetic children. Rented uterus, semen chosen from a catalogue."

After the remarks went viral, a number of celebrities boycotted the brand, including Elton John, who, according to the Guardian, has two children born with the help of IVF and a surrogate. Dolce ended up apologizing last August in an interview with Vogue. "I've done some soul-searching," he said. "I've talked to Stefano a lot about this. I've realized that my words were inappropriate, and I apologize. They are just kids." (John reportedly accepted the apology.)

So now apparently these shirts...

... seem like an olive branch. A very cartoonish, very expensive olive branch — a T-shirt alone costs $745. (Mic reached out to Dolce & Gabbana for comment and will update when we hear back.)

The line has its own hashtag, #DGFamily, emblazoned on the back of at least one shirt, that's making its way across social media. If the designers wanted to continue making amends, the timing couldn't be better; Politicians in Italy are expected to vote on a proposal to recognize same-sex civil unions and extend parental rights to those couples.

Either way, it's never a wrong time to support same-sex equality via clothing, such as this recent collection by BOB by Dawn O'Porter or the long-running American Apparel collection of "Legalize Gay" shirts. Of course, the sentiment works best when it's, um, something you'd actually want to wear.