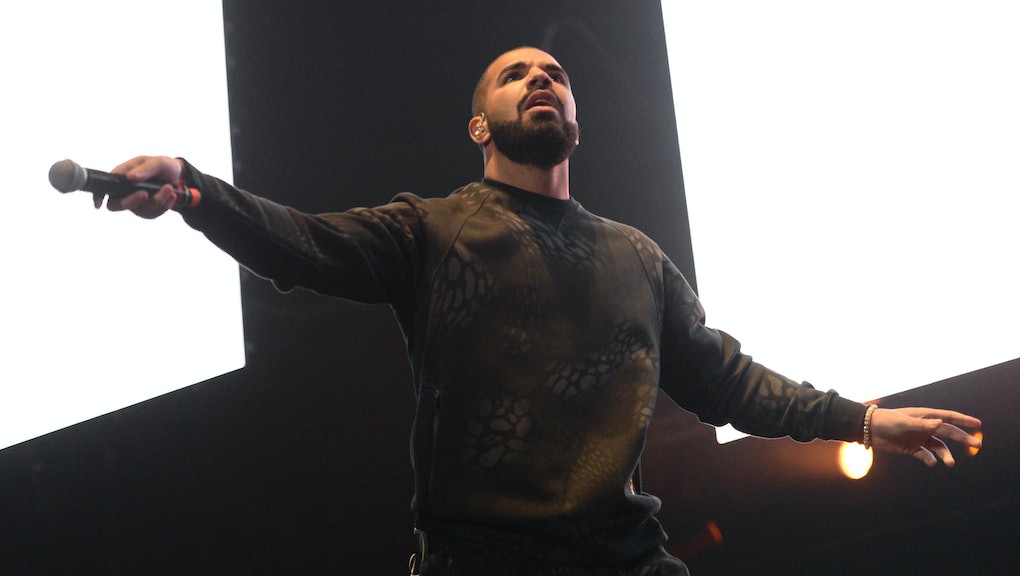 Not to be outdone by Rihanna's newest album Anti, Drake decided to tease his fans with "Summer Sixteen," the first single off his long-awaited fourth studio album, Views From the 6. The track, which debuted during an episode of the OVO Sound Radio show on Apple Music's Beats 1 on Saturday, was produced by Boi-1da, Noah "40" Shebib and CuBeatz.

The track can be listened to on Highsnobiety, or fans can buy the single on iTunes.

Fans of the Toronto-born rapper can expect a spring release for the album. Drake announced on the OVO Sound Radio show that Views From the 6 will be released in April, according to the Verge. The exact date is unknown. Drake announced the follow-up to his third studio album, Nothing Was the Same, back in 2014.

"I'll give you a date later on, just know that we're working," Noah "40" Shebib told the Verge, in reference to the highly anticipated album. "We're working."

The first line of the new single opens with the Canadian rapper responding to President Barack Obama's statement that Kendrick Lamar would defeat Drake in a rap battle. "Tell Obama that my verses are like the whips that he in," Drake raps over the smooth track. "They bulletproof."

Drake appears to have slid a diss towards Tory Lanez, a Toronto rapper who released the mixtape The New Toronto. "All you boys in the new Toronto wanna be me a little," Drake raps.

Drake also mentions rappers Jay Z, Kanye West and Lil Wayne in the new track. "Used to wanna be on Roc-A-Fella then I turned into Jay," the Canadian artist raps over the beat. "Now I got a house in LA, now I got a bigger pool than Ye. Look man, Ye's pool is nice, mine's just bigger is what I'm saying."

"Six, six, six, six, soon as I'm back in the city, they throw a parade," Drizzy raps, as he goes on to reference his mentor, Lil Wayne. "I might get a key to the city and give it to Wayne."

The track ends with a line from producer-turned-motivational speaker DJ Khaled. "They don't want us to have a bigger pool than Kanye!"

In September the Toronto rapper dropped What a Time To Be Alive, a mixtape with Atlanta rapper Future, over OVO Sound Radio.