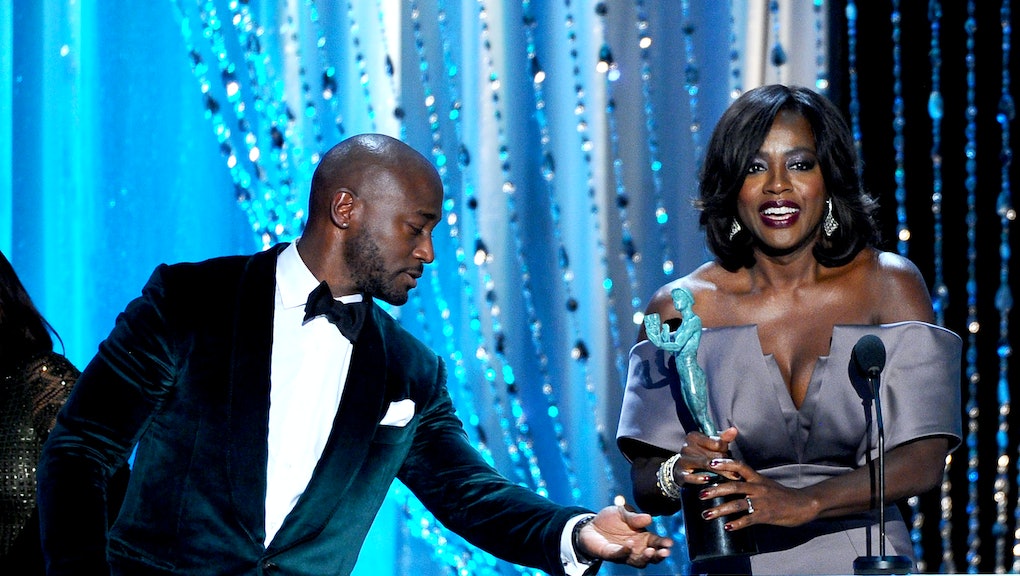 It doesn't take being a celebrity to see the obvious differences between Saturday night's Screen Actors Guild Awards and the upcoming 2016 Oscars, which many have simply began referring to as #OscarsSoWhite. Though Spotlight had a standout night at the 22nd annual SAG Awards, there was one clear winner above all from the entertainment industry's latest awards show: diversity.

"We've become a society of trending topics," Viola Davis told reporters backstage after accepting her award for Best Actress in a Television Series. "Diversity is not a trending topic. It's just not. I've always considered myself an actor since I got my equity card in 1988. I've never put any limitations on myself. I felt like I could play Chekhov, any character in Chekhov and Shakespeare in Arthur Miller, in August Wilson. I see myself as an actor. No matter what is going on in the business, I will find a way to practice my art, and all of the actors of color who I know don't place any limitations on themselves either."

While the Oscars failed to nominate a single actor of color, the SAG awards was all about cultural inclusion this year, with a number of films focusing on minorities, as well as a variety of actors and actresses representing multiple ethnicities, taking home SAG awards. There are 116,741 SAG-AFTRA members who participate in voting for the annual SAG Awards. Voters had up until Friday to send in their ballots for the live event. To what extent the #OscarsSoWhite controversy had on the voters, as well as the awards program throughout its entirety, remains unclear.

"Welcome to diverse TV," joked Idris Elba, who the Oscars failed to nominate for his role in Netflix's Beasts of No Nation. Elba took home two awards Saturday night, however: a supporting role award for the streaming service's originally produced film, as well as for his work in the TV series Luther.

"Look at this stage," Orange is the New Black's Laura Prepon said while accepting the award for TV comedy series and pointing to her handful of cast mates. "This is what we talk about when we talk about diversity. Different race, color, creed, sexual orientation."

While Spotlight is one step closer to potentially taking home the Academy Award for Best Picture, Leonardo DiCaprio could also finally receive his golden statue. His role in The Revenant has been raking in awards this season, with the 41-year-old winning a lead actor award Saturday night.