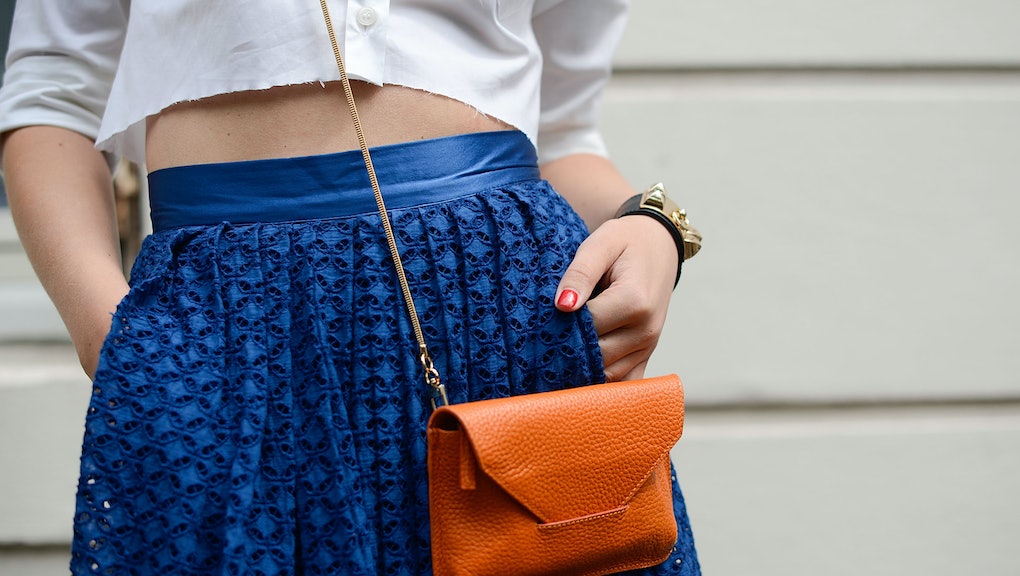 People have a lot of feelings when it comes to pockets. In short: They are great only when you have them and only when they are large enough to stuff anything you want inside of them. A snack? A phone? A condom? All of that should be able to fit in fashion's favorite hidden compartments. But, in lots of women's clothing in particular, that hardly ever happens.

Why are women's pockets so contentious in the first place? Really, why are they so crappy or totally nonexistent? What role does technology play?

Turns out, pockets have been fashion's favorite little secret since the 17th century, so this deep love and passion for them is not only sensible, but has also been ingrained into our society for the last 400 years. Oh, and they've pretty much been some sexist bullshit from the beginning.

Women's clothes didn't really have internal pockets for most of history, even while men's started appearing in the late 1600s. According to London's Victoria and Albert Museum, while pockets in menswear were often sewn directly into garments (like they still are today), women had to get crafty and wrap a sack with a string around their waists and tuck it way under their petticoats.

The purse-like items were much harder to access, though, than pockets or purses. Back then, women wore a gown with a petticoat (or skirt); underneath that was an under-petticoat; and underneath that was a shift. A woman's makeshift pocket was hung under her dress but over the under-petticoat, making it logistically difficult to access unless she was nearly nude (by 17th-century standards). It was basically like having two fanny packs that you couldn't get too easily on either side of your skirt — very flattering.

18th century: For women, those hip purses become an accessory.

Throughout the 1700s, the pouches women used as makeshift pockets became increasingly elaborate, with women hand-sewing embellishments and embroidery. Also, another major improvement: Slits in women's dresses offer them access to their hanging pockets under their dresses and whatever those pockets may contain. If you were a woman of money (and if you had pockets, you probably were), then they could contain anything from a pincushion to jewelry to cakes.

Oh, and an update on the men: They still have pockets and they work just fine. Typical.

So, in any case, the voluminous and circle-skirted gowns of the period offered the ability for women to both wear many layers and still have access to the pockets inside, which now varied in size. We can only imagine how many cakes could fill one at a time.

19th century: Pockets fall out of favor, and the world starts to suck.

Remember when everyone started wearing skinny jeans and then all the pockets disappeared? Well, that basically happened in the 1800s too, when the silhouette of popular dresses slimmed down into a more Grecian-inspired silhouette, leaving no room for internal "pocket" pouches at all.

"Women ... would study the ancient texts and couldn't find pockets, so they didn't use them in the dress," Elizabeth Morano, a professor at Parsons School of Design, told Marketplace. "Some of those stories are just stories, but the line was a lot more sleek. Think of the neoclassical dress. It's straight up and down. The line of the clothing changes completely."

So the purse was born. Reticules, as they were called, were minuscule bags that women carried in their hands rather than on their hips. As the century ticked on, they became more elaborately decorated, just like pockets had the era before. They also became a status symbol, since the bags weren't nearly large enough to carry any money, and well-to-do women tended to leave all the money-handling to men. Large reticules were looked down on because they symbolized that a woman worked and couldn't just stay home, like, sewing handkerchiefs and sipping tea or something.

Fashion historian Barbara Burman touched on this in her book Pockets of History: The Secret Life of an Everyday Object, according to Marketplace. "The frustrations and limitations of women's access to money and ownership of property were neatly mirrored in the restricted scope of their pockets," she wrote.

Early 20th century: All hail eternal badass Marlene Dietrich and the pockets she brought with her.

In the mid- to late-1800s, women started to rebel. According to the Victoria and Albert Museum, dress patterns started to include instructions for sewing pockets into skirts if you felt like being an independent woman.

Women also started to take their pocket rights back in the early 1900s when they started wearing pants.  In 1933, Women's Wear Daily apparently reported on the highly controversial subject, asking its readers, "Will women wear trousers?" Apparently, at the time, women having fabric between their legs totally weirded people out because of bogus reasons like "femininity."

Late 20th century: Fashion wants us thin, so it robs us of pockets.

But then, somewhere in the middle of the post-war 1900s, fashion had a crisis. Could there be trousers for women? How would they look? How would they be shaped? Because fashion is obsessed with slimming women's silhouettes (shocker) pockets started getting cut out of women's pants completely.

So that awful feeling when you put on a pair of pants and discover, to your horror, that there are no pockets? Your mom probably relates to that too. Over the course of the century, some pants for women had pockets, while some didn't at all. Consider this quote from esteemed designer Christian Dior in 1954, reported by the Spectator, "Men have pockets to keep things in, women for decoration."

The '70s and early '90s brought a period of relief when women dressing in menswear or menswear-inspired pieces became trendy. (Think Annie Hall or Hillary Clinton donning slacks.) But after the brief, loose-bottomed respite, the '90s brought the rise of the luxury designer handbag, which didn't help our plea and made fashion more concerned with creating bags than ensuring clothing had pockets. Also unhelpful: the tight, low-rise pants that swept in on Britney Spears' teenage hips in the late '90s, which did not have room for pockets at all.

Oh, and if you're wondering what the men were up to that whole time: They're too busy shoving their hands deep down into their pockets to really care about any of this.

21st century: OK, we've got some pockets, but will they fit my iPhone?

Big pockets are popping up, of all places, on red carpets, where women such as Amy Schumer are rocking pocketed dresses with their hands tucked ever-so-stylishly into them. But that doesn't mean it's trickled down to real clothing, like, jeans, where we really need them for our iPhones. Every iteration of the phone has gotten bigger, bringing with it a panic among women that one day, we will all be forced to either hold our phones or throw them into increasingly messy bags where they will never be found again.

When you look back at history, what we're really asking for is equality.

That said, people — mainly women, duh — are trying to change things. There are some clothing lines that have directly addressed the problem, ensuring their consumers that their pockets are indeed large enough for an iPhone 6S. So change seems to be coming, albeit slowly. The question now at this point: How much longer must we suffer?