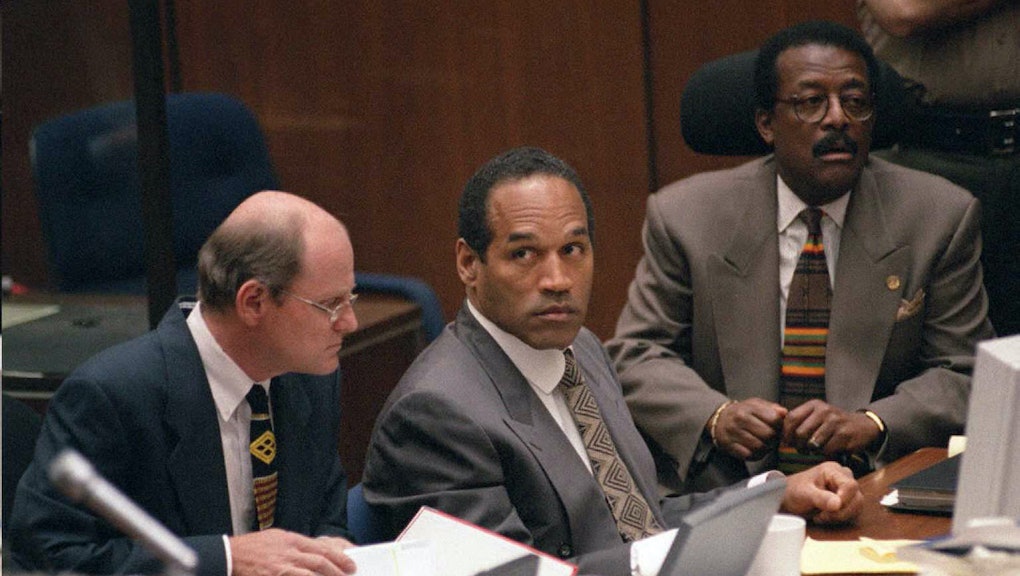 OJ Simpson Trial Facts You Might Not Have Known

"If it doesn't fit, you must acquit," according to one of Simpson's defense attorneys, Johnnie Cochran.

What does that mean? What kind of reasoning is that? Both valid questions. For those who either don't remember or weren't yet alive, we've compiled a list of the key evidence from the O.J. Simpson trial, in preparation for the debut of American Crime Story.

But first, some context: In June of 1994, Simpson was accused of murdering his wife, Nicole Brown Simpson, and Robert Goldman, her friend, according to People. The pair were found outside her residence, apparently stabbed to death. Simpson — who had pled no contest to charges of domestic abuse in 1989, and from whom Brown Simpson subsequently filed for divorce in 1992 — became the LAPD's primary suspect within days.

He was ordered to turn himself in on June 17, but didn't show. Another of Simpson's defense attorneys, Robert Kardashian, then shared a message from his client that, as People reported, sounded a lot like a suicide note. It was probably an attempt to disappear, though: Simpson was spotted in his white Ford Bronco on California's Interstate 404, launching a multi-hour police chase.

When Simpson finally surrendered, according to People, officers found a fake beard, a gun and a passport in the car, supporting the theory that the suspect had attempted to flee. He then stood trial, and was ultimately acquitted on Oct. 3, 1995.

His blood, meanwhile, was found in and around footprints near the bodies, as well as on a gate at the back of the apartment complex where they were found. Also on the scene? One leather glove — Aris Light, XL — whose match later surfaced on Simpson's property. The latter was covered in blood, which DNA tests matched to Simpson and the victims. Blood found in the defendant's car also matched Simpson, his wife and Goldman, while a pair of bloody socks that surfaced in Simpson's bedroom matched both him and his wife.

About that glove: The defense leaned heavily on the argument that DNA evidence had been mishandled by the police and ultimately used the gloves — which looked awkwardly small when Simpson tried them on in court — as proof that Simpson couldn't have committed the murder. Whether because Simpson had arthritis, was wearing a latex glove under the fluid-encrusted exhibits or hadn't tried that hard to pull them on, the ill fit wasn't necessarily proof of anything.

About those footprints: Simpson wore a size 12 shoe, and the bloody footprints were made by size 12 Bruno Magli shoes — which an FBI agent was able to confirm that Simpson owned. After close examination of a photo of Simpson taken some nine months before the murder, Special Agent William Bodziak identified the pictured footwear as the Bruno Magli Lorenzo, a style that proved an 18-point match to the crime scene footprints.

Simpson's attorneys didn't believe their client: According to the New York Times, Kardashian was never completely convinced of his client's innocence but remained loyal to him because the two were old friends. In 1996, the Times reported, Kardashian told ABC, "I have doubts. The blood evidence is the biggest thorn in my side; that causes me the greatest problems. So I struggle with the blood evidence."

According to CNN, Kardashian found Simpson with a gun in his hand, ready to shoot himself, on the day Simpson was supposed to be arrested. The attorney is also said to have removed a suitcase from his client's residence, which some speculated contained crucial evidence. Kardashian's involvement was so extreme that Robert Shapiro — who believed Simpson to be guilty — suggested he plead guilty as an accessory to the murder, as CNN reported.

Confessions: One detail that didn't make it to trial was the defendant's possible confession to the murder. On Nov. 13, 1994, football star Rosey Grier — acting in the capacity of spiritual adviser — visited Simpson at the Los Angeles County Men's Central Jail. Separated by a plexiglass partition, the two men had a phone conversation in which Simpson became very emotional and possibly admitted his guilt to Grier, who classified the dialogue as religious council when called to testify.

The only witness to the outburst was the sheriff's deputy, Jeff Stuart, who couldn't definitively confirm the alleged confession because of the visitation room's plexiglass barriers.