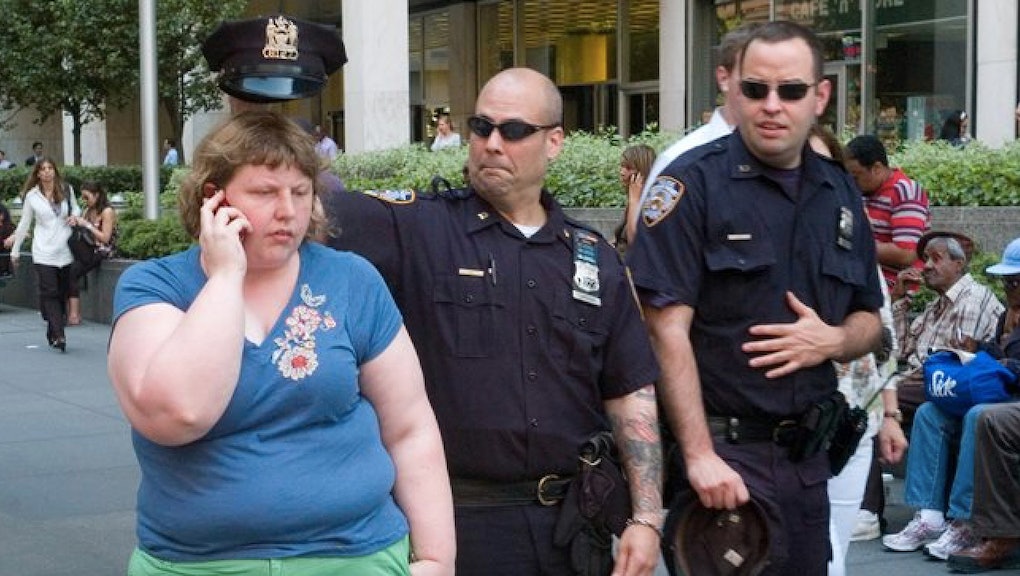 For some photographers, their work walks a fine line between documenting and creating. These artists balance fact with fiction, illuminating truth and reality through staging and storytelling. Artists like Cindy Sherman, with her multifaceted self-portraits, and Philip-Lorca diCorcia, with his images of male prostitutes, pushed boundaries of how we were willing and able to truly see others, and them, us.

New but important to these ranks is Haley Morris-Cafiero.

Morris-Cafiero, photographer and assistant dean at Memphis College of Art, documents the way people respond to her appearance through minimally staged self-portraits in public spaces. The series, titled Wait Watchers, started almost six years ago as an exploration of food in society, and has grown to encompass weight bias, beauty standards, the idea of self-improvement, judgment and even sexism.

It has also grown in support. She successfully funded a Kickstarter campaign last year to publish a book called The Watchers.

Wait Watchers began six years ago with a particular self-portrait taken on the Coca-Cola steps in Times Square.

"When I got the film back, I noticed that there [was] a man standing behind me who appeared to be sneering at me," Morris-Cafiero told Mic via email. "Even though we were in the sensory-overload capital of the world and he is being photographed by someone, he appears to be fixated on me. I then began to set up a camera to see what images I would capture if I documented myself performing mundane acts in public."

This is the unique draw of the series: She is doing essentially what everyone else is doing. It's mundane. She's walking, texting, eating and exercising. She's wearing her normal clothes, just what she picked out to wear that day, and doing the things she would normally do. Yet because of her weight, people tend to notice and respond to her.

The responses have been both supportive and shocking. In capturing these responses, she's holding up a mirror for consumers to inspect themselves and their own biases.

"I will never forget the first email I received after my photographs from the Wait Watchers series were published online," she said. "The sender's name was 'Fatzo' and the address was a derogatory comment. The content of the email was just one sentence that said, 'You fat, it's a sign of weakness.'"

The comments are especially vitriolic online. "The digital interactions are much more aggressive and direct," Morris-Cafiero said. "I have heard people make horrible comments about me when they walked by while I was photographing, but not nearly as many as the bullying comments online. The online bullies thrive on criticizing others."

In The Watchers, she highlights both the positive and negative responses to her work even more directly. One page features a negative comment, while the page facing it will share a supportive note of inspiration and hope.

In a way, she says, the online bullies even inspire her. She uses both the negative and positive comments as fuel for her creative fire.

This is evident especially in a recent collection within the Wait Watchers series called "Self-Improvement." In it, Morris-Cafiero does the things her online critics tell her she should — things like exercising, getting a makeover or buying new clothes.

The irony in the pieces: Even while doing the activities, the very things that people tell her she should, she still experiences judgment and ridicule.

While her work doesn't directly either praise or condemn the viewer, her personal message is one of hope and positivity. "I love my body and am proud of the way that I look," Morris-Cafiero said. This hasn't always been the case, but she hopes her work helps others find this self-acceptance. It's a journey she understands from personal experience.

In high school, Morris-Cafiero struggled with undiagnosed anorexia and eventually overcame it.

"I achieved loving myself when the frustration of being tired and stressed about my body all of the time came to head and I couldn't take it anymore," she said. "I was tired of being tired and hating myself for eating too much or not exercising enough. I knew that my body would never be bony. So I just let my body be what it wanted to be. If I were a supermodel, then I would have a problem. But I am not a supermodel."

With her work and her message, Morris-Cafiero helps consumers see more clearly, more positively and with more sensitivity. Through her photos, viewers can better understand what it is to be outside of themselves — and how to be proud of not only how they look, but how others look too.