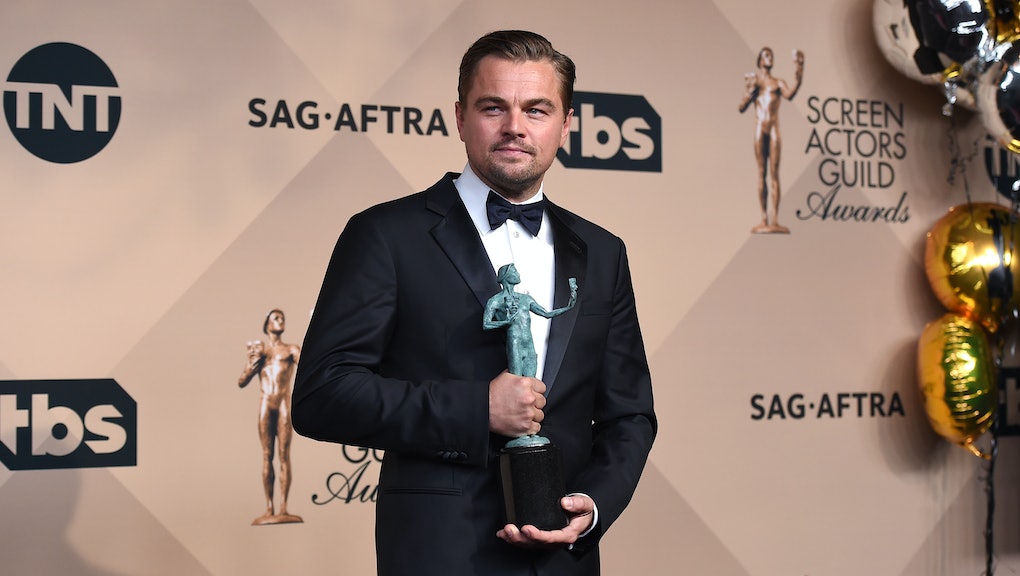 A couple of weeks ago, at the Golden Globes, Jennifer Lawrence hit her peak. With her third Globe in four years in hand, as she wagged her finger at a foreign reporter for using his phone, she was thrown headlong into the same backlash cycle as actresses such as Kate Winslet and Gwyneth Paltrow before her.

But at that very same awards show was someone very close to hitting his own peak: Leonardo DiCaprio. In fact, he should have hit it long ago. The only thing keeping him from doing so: his gender.

By all accounts, DiCaprio wants this Oscar, and he wants it bad. He's been nominated for four previous acting Oscars (six Oscars total, thanks to a producer credit on The Wolf of Wall Street) and won none of them. DiCaprio's thirst for gold became a meme in 2014 during the Wolf of Wall Street awards cycle, but he wound up beat out by Matthew McConaughey.

Fast-forward two years to this Oscar season, and DiCaprio is the frontrunner for best actor. He's already won equivalent prizes at the Golden Globes, the Critics' Choice Movie Awards and at this past Saturday's Screen Actors Guild Awards. Barring some bizarre twist of fate over the next month, DiCaprio is winning that Oscar come Feb. 28.

After four previous attempts at bat, DiCaprio and the PR team handling The Revenant took no chances. They crafted a narrative about how brutal and painstaking it was to shoot the film, starting the story in a Grantland profile in July. The stories didn't let up for the rest of the year, with tales of sleeping in animal carcasses and surviving brutal conditions often taking precedence over discussing the quality of the film itself.

This "extreme cinema" press strategy, a term Salon coined but the Atlantic also noted, is hardly new. Actors have been physically testing themselves for years — think Christian Bale in The Fighter and Reese Witherspoon in last awards season's contender Wild. The Revenant's Oscar campaign is taking this to new heights, though. We've been learning more details about the brutality of shooting this movie for six months (half a year)! It's an impressive sales pitch — albeit for awards, not for moviegoers. The average moviegoer isn't interested in how brutal the movie was; they want to know how good the movie is.

Luckily for DiCaprio, this full-court press worked. He's going to win. But if he were up for best actress instead, this Oscar wouldn't be a crowning achievement. It would be a massive step backward.

In 2013, Anne Hathaway was blasted for seemingly wanting her Oscar too much. Stories of her cutting her hair for the role of Fantine in Les Misérables were told with key words like "hacked" and key phrases like "mental patient-level crying." Cutting her hair was played for drama, while in interviews she talked about Les Misérables and her craft.

It was basically a smaller-scale version of DiCaprio's Revenant campaign. It worked for her, like it will work for him. For showing that she wanted it, she was called "unlikable" and worthy of "hatred."

Meanwhile, DiCaprio wants this Oscar. He will get it, and he will walk away all but unscathed. Eddie Redmayne did the same last year after his brazenly happy Oscar speech. For them to want it doesn't matter. They need not even show up to accept their award to earn them respect.

Actresses, meanwhile, must hit exactly the right tone. They must want it and campaign for it, unlike a Mo'Nique, but they must not want it too much, like a Hathaway. Meanwhile, DiCaprio can meet the pope in an Oscar season without fear of backlash. Imagine the jokes if Kate Winslet had visited the pope while campaigning for The Reader.

By all accounts, we should be at peak Leonardo DiCaprio. The truth is, however, that he's not anywhere near the mountain. The mountain may not even exist. He's too busy sleeping in animal carcasses to notice.