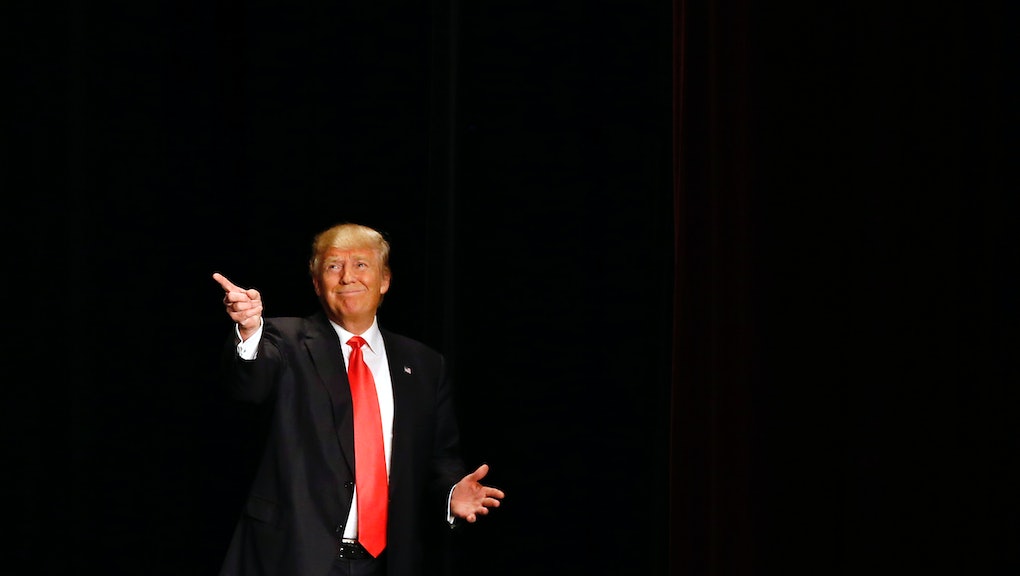 There are a lot of great quotes from the annals of history. The following quote about marriage equality, from 2016 Republican presidential frontrunner and business mogul Donald Trump in a 2015 interview with the Hollywood Reporter, is not one of them:

Some people have hopes of passing amendments, but it's not going to happen. Congress can't pass simple things, let alone that. So anybody that's making that an issue is doing it for political reasons. The Supreme Court ruled on it.

It may not be "Give me liberty or give me death!" but Trump said it, which makes his backpedal over the issue of marriage equality over the weekend a higher caliber of flip-flop than voters are used to during the campaign season.

In an appearance on Fox News on Sunday, Trump told anchor Chris Wallace that he would seek to amend the Constitution and do so by changing the makeup of the Supreme Court.

It has been ruled upon. It has been there. If I'm elected I would be very strong in putting certain judges on the bench that maybe could change things, but they have a long way to go. At some point we have to get back down to business. But there is no question about it. And most people feel this way. They have ruled on it. I wish it was done by the states. I don't like the way they ruled. I disagree with the Supreme Court in that it should be a states' rights issue.

Wallace, who himself looked a bit taken aback by the day-before-the-Iowa-caucus change of heart, asked Trump, "Are you saying that if you become president you might try to appoint justices to overrule the decision on same-sex marriage?"

To which Trump replies: "I would strongly consider that, yes."

The Supreme Court legalized same-sex marriage nationwide on June 26, with its decision in the case of Obergefell v. Hodges. The decision was a close 5-4 vote.

Of the nine justices currently sitting on the bench, five have served on the bench for more than 20 years. Three of the oldest justices voted for marriage equality — Ruth Bader Ginsburg is 82, Anthony Kennedy is 79 and Stephen Breyer is 77. Because the next president may reshape the court and likely choose up to four Supreme Court nominees, Trump's desire to pack the court and overturn marriage equality could become a reality.

Trump is not the only 2016 Republican presidential candidate with his eye on bursting marriage equality's totally legal bubble. Sen. Marco Rubio has also outlined an extensive plan to overturn marriage equality.

"Any future Supreme Court can change it," Rubio told NBC's Meet the Press on marriage equality, ThinkProgress reported. "And ultimately, I will appoint Supreme Court justices that will interpret the Constitution as originally constructed."

You can watch the full interview below. If you want to watch Trump's remarks about marriage equality, skip to the 8:10 mark.