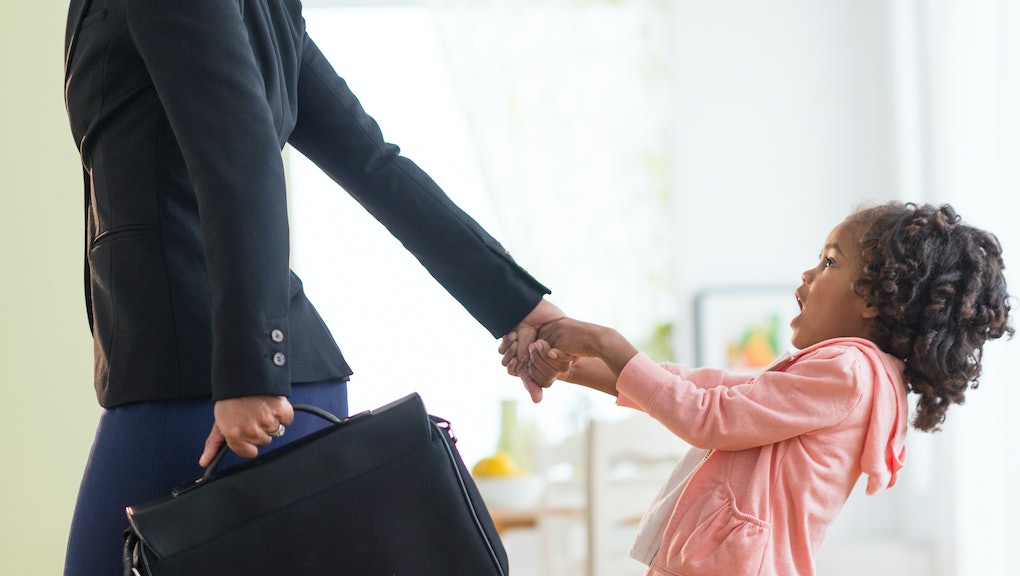 This Newscaster Was Shamed for Being a Working Mom, so She Decided to Fight Back

In the 2007 jam "Piece of Me," the wise and honorable Britney Spears sang such lines as "I can't see the harm in working and being a mama," and, "with a kid on my arm, I'm still an exceptional earner." It was a glorious moment of DGAF-ness from a woman who chose to have both a child and a career — y'know, like how men do.

Sadly, though, some people still haven't gotten Spears' memo that it's OK (and often necessary!) to balance work with motherhood. Like one poor shmuck on Twitter who recently posted a judgmental tweet (which has since been deleted) criticizing Irish radio presenter Susan Keogh for being a working mom.

"I was trolled earlier this week by a guy who thinks I shouldn't have a baby AND a job," Keogh tweeted, along with an impressive six paragraphs on why she chooses not to stay home making pasta sauce from scratch all day while her daughter is at preschool.

Keogh's note is a snarky delight, beginning with "Dear Brave Man" and ending with, "when I addressed you earlier as 'Brave Man' what I actually meant to say was 'Tosser.'" (In British slang, "tosser" is another way of saying "wanker" or "a person (invariably male) whose demeanour is obnoxious.")

In the note, Keogh offers various reasons for why she chooses to have a career while raising a child. "I like my job," she wrote in the open letter. "I enjoy it. It makes me happy and content. And as a result a better mom."

She added that she often feels guilty about being apart from her daughter, but works in order to "provide a better future" for her.

And as if those reasons weren't enough, Keogh added that her main reason for working is to set a positive example for her daughter, who may grow up and think to herself, "Hey, I think I'd like to have a career as well!"

"I want to show her that she can make choices," Keogh wrote. "I want her to be confident enough to make the right ones for her. I want her to choose happiness."

And then she wraps up with that spicy "tosser" zinger.

Even in 2016, the stigma surrounding working moms is surprisingly real. Although working moms are the primary or sole income providers in 40% of U.S. households with children, they are still more likely to be judged for opting out of the 1950s paradigm of #DatHousewifeLife.

A 2012 study asked a group of 769 participants to answer questions about their thoughts on single parents and found that single working fathers were viewed more favorably than single working moms. "[This] confirm[s] that many people put single dads on a pedestal while hyperpolicing single moms," wrote Ellen Kate in Everyday Feminism of the study's results. Another report from the Harvard Business School echoed these results, determining that working moms who left work early were more likely to be judged than single men who did the same.

And yet! Research has proven that the judgment hurled at working moms is bullshit, because their children tend to wind up doing pretty great in life. Another Harvard Business School report concluded that "women whose moms worked outside the home are more likely to have jobs themselves, are more likely to hold supervisory responsibility at those jobs and earn higher wages than women whose mothers stayed home full time."

Ya hear that, Twitter troll? Keep your judgmental, sexist trolling to yourself. This is 2016, not 1955.