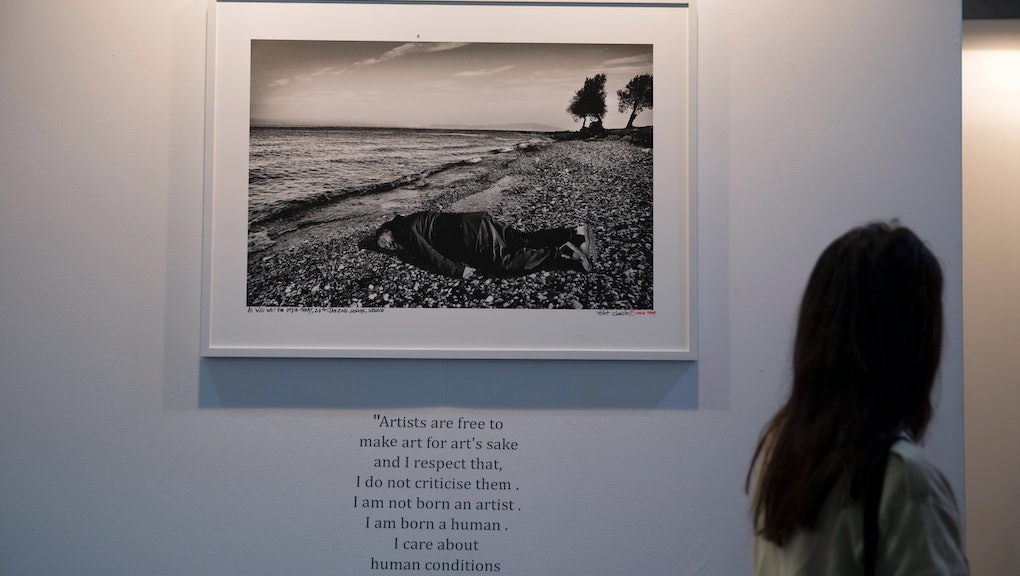 Chinese artist and political dissident Ai Weiwei has recreated the death pose of three-year-old Syrian refugee Aylan Kurdi, whose demise drew international attention in 2015 after photographer Nilufer Demir captured tragic photos of emergency personnel recovering his body from the waters off the shore of Turkey.

Ai is best known for his work criticizing the Chinese government's authoritarianism, opaqueness and human rights record. In 2011, Chinese paramilitaries held him in a secret prison for 81 days, prompting global calls to free the artist. But while his activism has drawn much praise and propelled him to superstardom, Ai's art has divided critics.

The photo of Ai, 58, posed as Ayland Kurdi was taken by India Today, which prominently featured the piece at an exhibition in Washington, D.C., last week, the Washington Post reports.

A caption below the photograph at the exhibition read, "Artists are free to make art for art's sake, and I respect that, I do not criticize them. I am not born an artist. I am born a human. I care about human conditions rather than the opinions. I have no choice."

(Editor's note: Some readers may find the following photo of Aylan Kurdi disturbing. View with discretion.)

"It is an iconic image because it is very political, human and involves an incredibly important artist like Ai Weiwei," India Art Fair co-owner Sandy Angus told the Post. "The image is haunting and represents the whole immigration crisis and the hopelessness of the people who have tried to escape their pasts for a better future."

Over 1 million refugees arrived in Europe last year in one of the biggest immigration crises in decades. According to the International Organization for Migration, over 971,000 of the migrants arrived by sea, with an estimated 3,692 people perishing along the route, mainly due to unsafe conditions on boats operated by human smugglers.