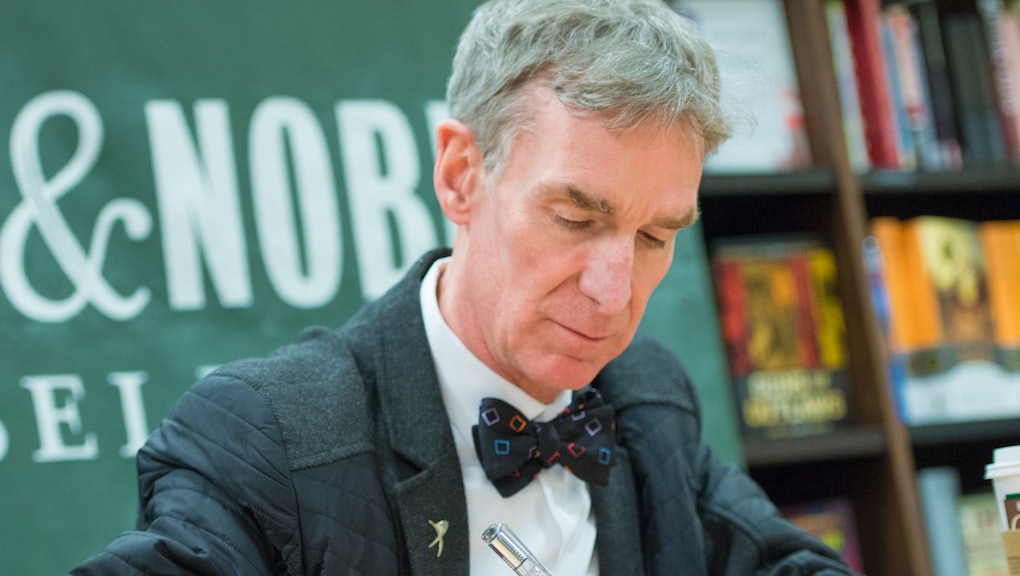 Bill Nye Wants to Bring NASCAR Into the Future, One Fossil Fuel-Free Car at a Time

Famed science educator Bill Nye has an idea for what NASCAR should do with all its fossil fuels: Ditch them entirely.

"NASCAR kinda breaks my heart," the Science Guy said in a recent editorial in digital magazine Aeon. "It's a celebration of old tech. It uses gasoline-burning instead of electron-flowing."

But even Nye knows a change like that can't happen overnight. Conceding that the current Tesla Model-S electric cars do not approach anywhere near the performance of modern gasoline-powered NASCAR race cars, he calls on engineers to start imagining and devising high-performance batteries and electric engines capable of closing the gap.

Another tiny change he thinks would have a huge, immediate impact? Changing a single letter in the name.

Nye proposes NASCAR could change its name to NESCAR, for National Electric Stock Car Racing, and that such a switch would greatly boost sales of electric vehicles.

Secondary benefits might include factors like decreased refueling time — instead of pouring gasoline, pit crews could simply swap out a battery, Nye writes.

"The sooner NASCAR (or NESCAR) embraces electric drive trains, the sooner the U.S. can be the world leader in automotive technology, and the sooner we can stop pumping carbon dioxide into the air every time we want to go somewhere to get groceries, pick up the soccer team, commute to work or watch a race," Nye concludes.

However, the Independent Journal-Review countered Nye by citing the league's already-extensive green programs, including being the biggest recycler in sports, using recycled oil and methanol in its fuels, and powering its Pocono racetrack with solar energy. It also noted there is already a successful alternative for electric vehicles, Formula E.

Regardless of the merits of the idea, NASCAR is unlikely to consider a move that could shake up its business model, at least anytime soon. Fox Sports' Tom Jensen, for one, argues it is unlikely "taking the roar of engines away from the racing will be something that NASCAR fans would view as an upgrade" — and with the league already seeing declining ratings, it might not view now as the right time to shake things up.