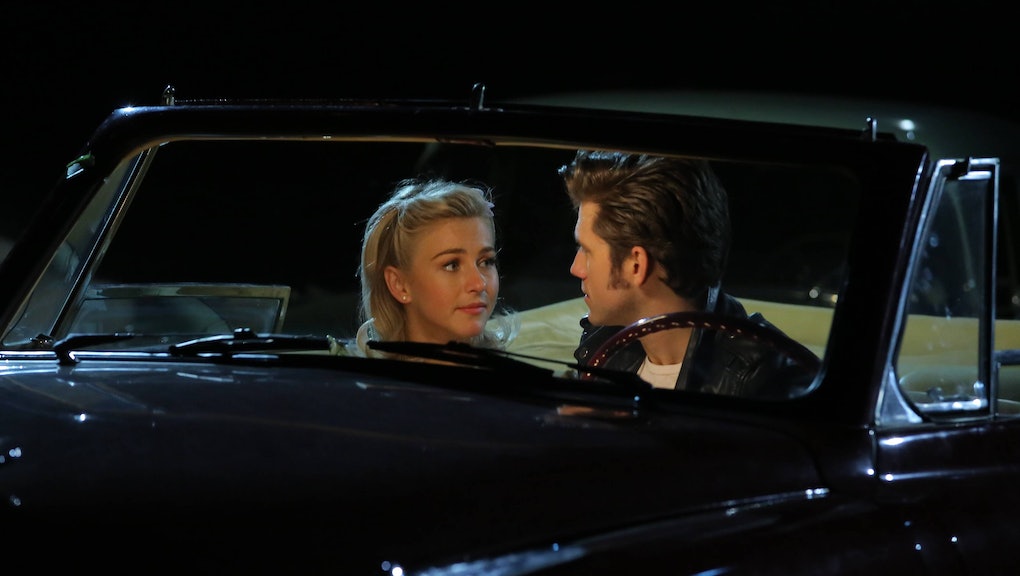 'Grease: Live' Proved We Still Have a Lot to Learn When It Comes to Talking About Sex

There was a lot to love about Grease: Live, the live production of the classic musical that aired on FOX on Sunday. From the dazzling period costumes to the seamless mid-'90s boy band choreography to Vanessa Hudgens knocking it out of the park as Rizzo a mere day after her father died, many critics thought that Grease: Live marked the apotheosis of the live network television musical.

Before the 2016 production of Grease: Live aired, the cast members revealed that the production would not adapt this casual reference to date rape — a decision that Aaron Tveit, who played Danny, defended in an interview with AdWeek.

"We're trying to just have fun with it, as opposed to suggesting that it's something darker. Hopefully, it comes through that way," he said. Writers on the internet criticized the decision at the time, proposing various alternatives to the lyric. But it stayed in the show, much to the chagrin of people on Twitter:

Perhaps even more troubling than the cheerful reference to violent coercive sex is seeing it writ large in the scene where Danny and Sandy go on a date at a drive-in movie theater. In both the original film and the 2016 production, Danny persistently and aggressively tries to get Sandy to have sex with him in his car, despite her repeatedly saying "no." Eventually, she closes the door on his junk and storms off in a huff.

In the original movie, the moment is played for laughs and, later, for emotional resonance, inspiring Danny to sing the ballad "Alone at a Drive-in Movie." The 2016 production played it very much the same way, a choice that's both puzzling and disturbing in execution: While the scene is intended to make us both sympathetic to Danny's plight and amused by Sandy's prudishness, in the context of an ongoing cultural conversation about sexual consent, it's hard not to view it as the plaintive ballad of an attempted date rapist, bemoaning his failure to get his D wet.

Were the 2016 musical a bit more self-aware — if it were, say, more of a direct commentary on 1950s social mores, and less of a splashy, star power-infused production — including the date rape scene would make more sense: Grease takes place during a time when discussions about consent were not regularly taking place, so seeing how this lack of education about rape actually played out IRL could be read as a pointed nod to the era's regressive mores.

Had the producers gone in this direction, they could've conceivably argued that cutting the drive-in scene would have constituted a whitewashing of an era when people were poorly educated about sex, and such backseat violations unfortunately took place on a fairly regular basis. Yet Grease: Live chose to leave the date rape intact, leading one to wonder: Why would the producers include a scene that makes light of an issue like sexual assault, while other aspects of the original film were revamped for a more modern, politically correct audience?

The cast of Rydell High, for instance, is far more diverse than in the original production, featuring such actors of color as Carlos PenaVega, Mario Lopez and Keke Palmer; furthermore, the writers of Grease: Live completely eliminated the problematic fat-shaming of the character Jan, rewriting jokes at her expense to make them less about her weight and more about her general weirdness instead. It's hard not to wonder how the producers thought a joke about a girl eating too many Twinkies would somehow generate more outrage from viewers than a scene that literally depicts an attempted date rape.

The censorship of Grease: Live's most famous songs was also decidedly troublesome. Lyrics that were interpreted as crude and offensive were slashed from the script, with the librettists changing the lyrics in "Greased Lightning" from "the chicks will cream" to the "chicks will scream" and "pussy wagon" to the embarrassing (and nonsensical) "dragon wagon." Even the lyric "lacy lingerie" in "Freddy My Love" was deemed too provocative, with Keke Palmer singing the decidedly more PG "wedding bouquet" instead.

The fact that FOX thought that the image of a teenage girl wearing "lacy lingerie" was more offensive than the image of a young woman fighting off sexual assault in the back of a car not only speaks volumes about the double-standards related to network censorship, it also underscores a troubling double-standard that reflects how we think about sex — one that did not escape the attention of people watching the show on Twitter:

FOX's fluid, self-contradictory stance on what is and isn't "appropriate" is troubling, to say the least — but it isn't all that shocking. In a world that considers sexual assault a subject rife with comedic value, where men are rewarded for sexual experience while women are still told they are "asking" to be raped, it makes sense why rape scenes still pass muster, while casual references to the female genitalia do not.

If nothing else, the censorship of Grease: Live proves that we're not quite as far removed from the politically retrograde world the musical gently mocks — a world replete with slut shaming, a rigid Eisenhowerian sense of morality and ass-backwards gender stereotypes. When it comes to talking openly and seriously about sex, consent and desire, we still have a fairly long way to go from the 1950s.