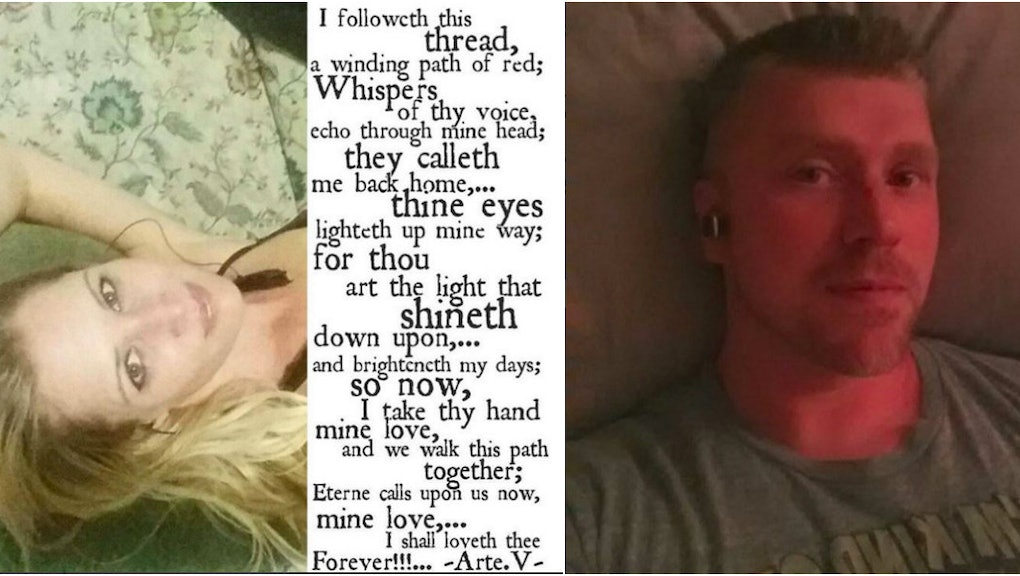 This Instagram Couple Got Married a Few Minutes After Meeting IRL, Which Is Cool for Them

Thanks to the advent of social media, it has never been easier to find a total stranger who is willing to spit in their hand and manipulate your genitals for a few hours. What's more difficult, however, is finding someone you want to spend the rest of your life with — especially if you've never laid eyes on the other person IRL. And yet! That's exactly what these two kids did after meeting on the popular photo-sharing youth internet platform Instagram.

Arte Vann and Erica Harris's epic love story began when Vann posted a poem under the hashtag #7deadlysins on Instagram in March. Harris commented on the poem, one thing led to another and the two started regularly sharing memes and original poems to document their love for each other, as one is wont to do when immersed in the throes of new passion.

But Vann and Harris weren't content with limiting their relationship to cyberspace. (Is that a term people use anymore, BTW?) Eventually, Vann, who lives in New York City, decided to purchase a one-way ticket to Ontario, California, where Harris is based. When he arrived at the airport, he instantly proposed to her, with the two exchanging a first kiss and eloping moments later.

"Wait, so they never met IRL?" you might be wondering. "But how could they possibly know if they were compatible? What if he smelled bad? What if she had a giant goiter on her neck that she concealed in Instagram photos with strategically placed throw pillows? How the hell did they know that this was going to work out?"

While these are all valid queries, they're questions that Harris and Vann appear not to have thought much about — or at all, really. "Don't listen to your thoughts, don't listen to your head, follow your heart... follow your soul," Vann told local television station WABC when asked if he had any advice for other Instagram love seekers.

You heard it here first, kids: If you shut off your brain and turn on your penis, you too can find the soulmate of your dreams on social media. Best of luck to the happy couple, though. (But seriously, we don't recommend this.)