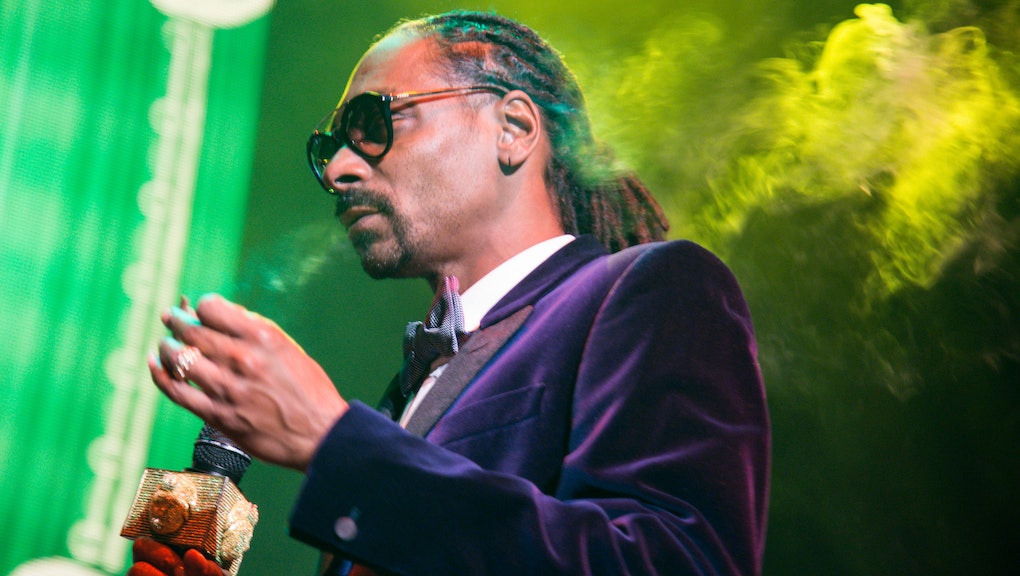 7 of the Most Famous Marijuana Advocates

The battle for marijuana legalization has been long-standing and slow-burning. In 1970 during the presidency of Richard Nixon, marijuana was labeled a Schedule I drug, a classification that includes heroin and LSD, the International Business Times reported. Almost half of the United States has already legalized marijuana in some form, with more expected to join this year.

But mainstream attitudes on marijuana are changing. In October, about 58% of 1,015 adults polled supported legalization — this is a 7% increase from 2014, USA Today reported. If that's not convincing enough, then take a quick glance at the $100 million profit from Colorado's recreational marijuana sales for August.

Fans of cannabis have a few public figures to thank for this kind of steady progress. From reggae master Bob Marley to cannabis comedian Tommy Chong, here are some of the biggest names helping to push marijuana into the clear:

Rapper Snoop Dogg has long let the world know about his love for cannabis, and with an empire to prove it. Not only has he put his name on media company Merry Jane, but he has released his own line of marijuana called Leafs by Snoop and branded vape pens through Grenco Science. "It's from the Earth — it's not some man-made shit," Snoop Dogg told GQ. "It's actually growing from the ground straight to you, so it's just like eating a vegetable." Snoop Dogg could be considered a bonafide weed connoisseur, having told Reddit in 2012 that he smoked about 81 blunts a day, CBS reported.

Along with politics, the late Jamaican singer Bob Marley spent his career advocating for marijuana's spiritual and healing powers. "Rum teach you to get drunker; herb teach you to be someone," he once said in an interview. But Marley's legacy lives on past his death. In 2014, Marley's family teamed up with private equity firm Privateer Holdings to release what would become a the world's first international cannabis brand, called Marley Natural, Mic previously reported.

Country music veteran Willie Nelson doesn't let his 82 years of age stop him from continuing to pioneer marijuana advocacy. Nelson's tolerance is incredibly — for lack of a better word — high, and he has the ability to take up to 40 hits of marijuana before flawlessly performing onstage, New York Magazine reported. Like Marley Natural, Nelson has partnered with private equity firm Tuatara Capital to create his own line of marijuana products called Willie's Reserve in attempts to stop big farming companies from dominating the industry, Fortune reported. "The economy going off is going to help it a lot," Nelson told the Huffington Post about marijuana legalization in 2013. "There's money there, and anyone with any brains at all can say, why do you want the criminals to make all the money off of this when it's proven that it won't kill you unless you let a bale of it fall on you?"

Rihanna is  open about her positive feelings towards marijuana, routinely uploading images of herself and marijuana onto her social media. She's defended smoking cannabis multiple times over Twitter, and on the cover of her 2012 single "Diamonds," Rih is depicted her rolling a joint filled with diamonds. In 2012, she showed her dedication to the plant by dressing up as a marijuana bride for Halloween, complete with a green veil and cannabis bouquet, Billboard reported. "Rihanna is a pothead and so am I, so we're real cool," rapper A$AP Rocky told Rolling Stone in 2013. "Weed is going to bring us together as a generation. Drugs is what created Woodstock. Let's be clear about that."

Before the Pineapple Express, there was smoking comedian duo Cheech & Chong, made up of Richard "Cheech" Marin and Tommy Chong. From the 1970s to the early 1980s, the two released movies based on adventures around marijuana. Their 1978 film Up In Smoke paved the way for cannabis to be humorously included in movies, with two stoners as the heroes, according to /Film. Chong has recently released marijuana products, such as clothing wipes to remove the marijuana stench, all in hopes of becoming the "Sam Walton" — who founded Walmart — of marijuana, according to Forbes.

"I pretty much smoke weed every day," Seth Rogen told FHM in 2014, according to E!. "I work a ton, probably much more than anyone would like to think I do. But I do also smoke weed, which I don't think stops me from working a lot." The comedian often takes on stoner stereotypes in his movies and portrays them as nice, funny characters, such as in Pineapple Express and Knocked Up. Hailing from Canada, Rogen has said how "shocked" he is about how illegal marijuana is in California, according to an interview he had with Rolling Stone in 2014.

Legendary actor Morgan Freeman has become a public voice on legalizing marijuana, saying he would consume it in whatever form he could, according to the Daily Beast. "This movement is really a long time coming, and it's getting legs," he told the Daily Beast. "Now, the thrust is understanding that alcohol has no real medicinal use." Freeman says he uses marijuana for his fibromyalgia pain, noting that it's the only thing that offers relief.