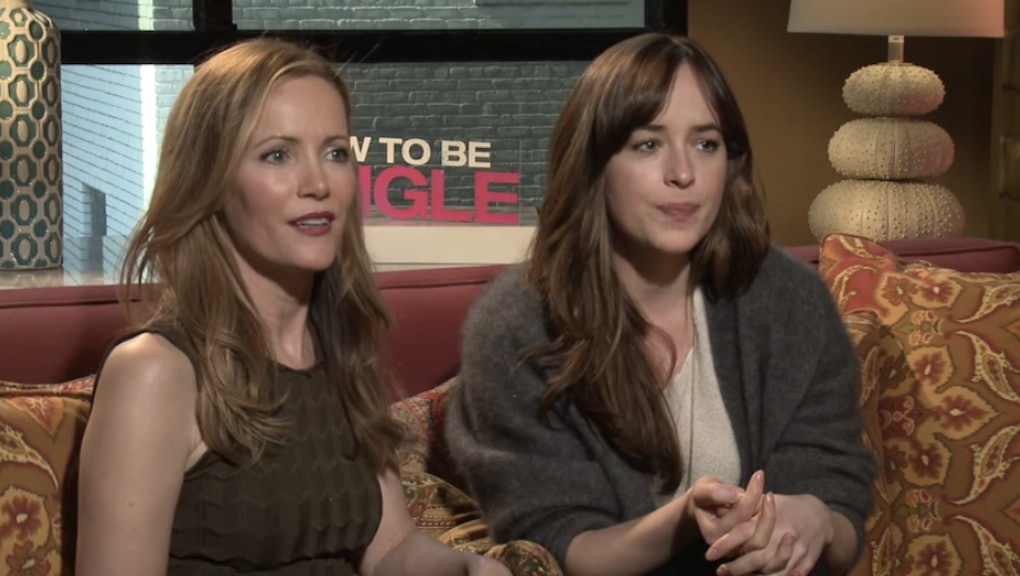 Here's what a typical flirtatious male-female interaction looks like: The man opens by telling the woman she's attractive, since she obviously needs to know. He then asks her where she's from, although obviously he doesn't really need to (or care to) know. He then tells her that shirt really looks great on her, and that maybe she should always wear tank tops to show off her body.

If that scenario sounds absurd, that's because it is, something that becomes highly obvious when the tables are turned. Thankfully, Leslie Mann and Dakota Johnson did that table-turning so perfectly for us in an interview that is now going viral.

The target? Chris Van Vliet from Miami television station WSVN, who interviewed Mann and Johnson for their new movie How to Be Single — a film that, appropriately, seems to be all about flirting and trying to get laid.

His socks are cute... actually, he's cute. Does he work out?

He looks pretty muscular. Can he maybe take his shirt off? No, more... no, even more. That's better — you know, he should always wear his shirt that way.

He's flattered, then disarmed, then entirely uncomfortable and consciously aware of how objectified he is. Hmm, how many women have ever felt that way?

The women may just have been trying to make the dude uncomfortable, but the situation is all too familiar for plenty of women who've been on the receiving end of such thirsty treatment, both as reporters and as interview subjects.

Toward the end, the reporter is basically rendered useless by the onslaught of compliments, whereas most women have figured out how to put up with it and go on with their days. Perhaps if all women were quite so aggressive, men might realize how absurd they sound.