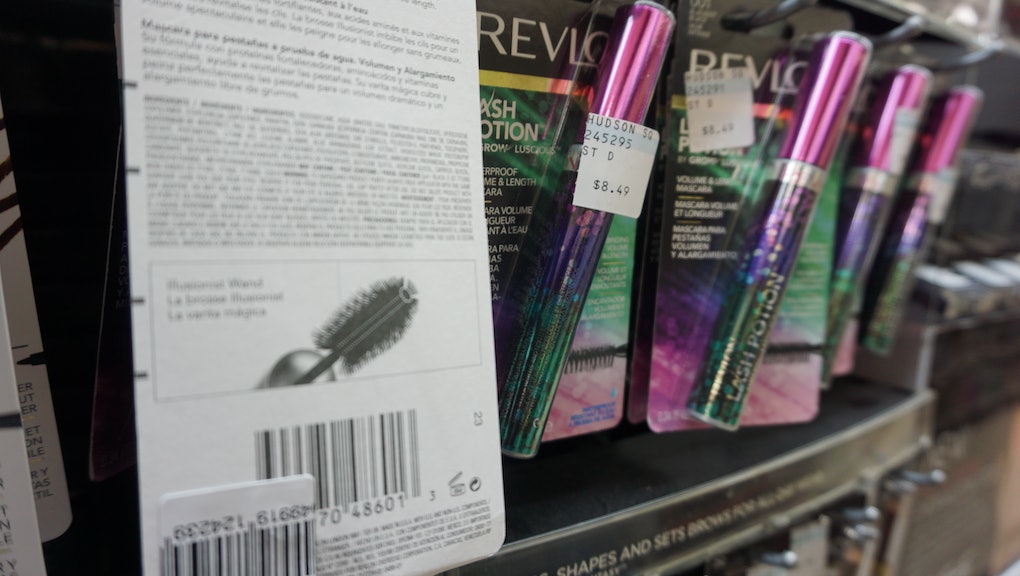 If you wear makeup, you've probably heard the horror stories: Cosmetics can grow bacteria, and if you don't replace them frequently enough, you could end up battling some nasty infections. The U.S. Food and Drug Administration even warns about the dangers of bacteria-riddled mascara.

And yet many of us — this reporter included — have a habit of hoarding our makeup for months, or years, on end. Financially, it can be tough to rationalize throwing out a tube of mascara that's only half-used. And then there's the hassle of shopping for new makeup. Have you been to Sephora recently? The kaleidoscope of cosmetics is so dizzying, it's almost worth risking an eye infection.

So how can you find out when your mascara, lotion or nail polish is going to expire? It turns out, there's a surprisingly easy trick.

The secret: Cosmetic products have expiration logos — they're just tough to spot. Check the back of the packaging and see if you can spot a tiny symbol of a jar with an open lid. There you'll find printed the number of months or years the product will last after opening.

Here's some drugstore mascara. The packaging recommends replacing the mascara six months after opening — longer than the FDA's recommendation of three months:

You can even find the logo on nail polish. Here's a bottle of Essie polish:

The health risks: "A lot of products have them on there, but it's kind of confusing for someone who's just looking at the back of the box," Kelli Bartlett, director of makeup artistry at Glamsquad, an on-demand beauty service, told Mic.

And though it's easy to carelessly throw away the packaging of your new mascara, Bartlett said it's "really important" to note how long you can use a product after opening. If you think you'll forget, you could keep a list of your cosmetics and when you opened them or write the date on each container.

"The minute air is exposed to your products — mascara, cream, gel, even a powder — it is at risk for contamination," she said.

Keeping your products too long after opening could lead to some dire health consequences, according to dermatologist Dr. Lisa Hitchins.

"The bacteria can get in there and the preservatives might not be working quite as well as they were when you first opened it," dermatologist Dr. Angela Bowers said, according to Science Daily. "If you get some of that in your eye, you may develop conjunctivitus, which we know as 'pink-eye.'"

Expired powders can also "irritate the skin and cause little red bumps that look like acne," Bowers said.

Use your nose: There are other ways to know when your makeup is ready for the trash. When it comes to mascara, for example, try the smell test.

"You can really tell when it's gone bad," Bartlett said, describing the telltale indicator as "a funky kind of tinge in the smell."

You might also be able to tell by the way the mascara goes onto your eyelashes. "If you start to see it flake off, and notice your once perky, perfect lashes start to get sad throughout day, it's another sign you're ready to chuck it," she said.

Lots of folks think their powders will take longer to spoil than their cream-based products, but Bartlett warned they can be "just as scary." When they're no longer good, "you'll start to notice a kind of a film on the top," she said.

Here's another good tip, CBS New York reported: Check your makeup packaging for a batch number, and search it on checkfresh.com, a website that records the manufacturing date of perfumes and cosmetics.

Of course, sometimes you don't need to be a detective to know when your makeup needs to go. Bartlett recalled going to a former client's home to help her clear out her old makeup. In the back of a closet, Bartlett found a jar of expensive night cream that client claimed she'd been "saving for a special occasion."

"It looked like a little mini-forest had started to grow inside — I'm not kidding you," Bartlett said. "It was like little, teeny, tiny, green, furry things and mushroomy-looking business had started to grow. I've never been the same since."