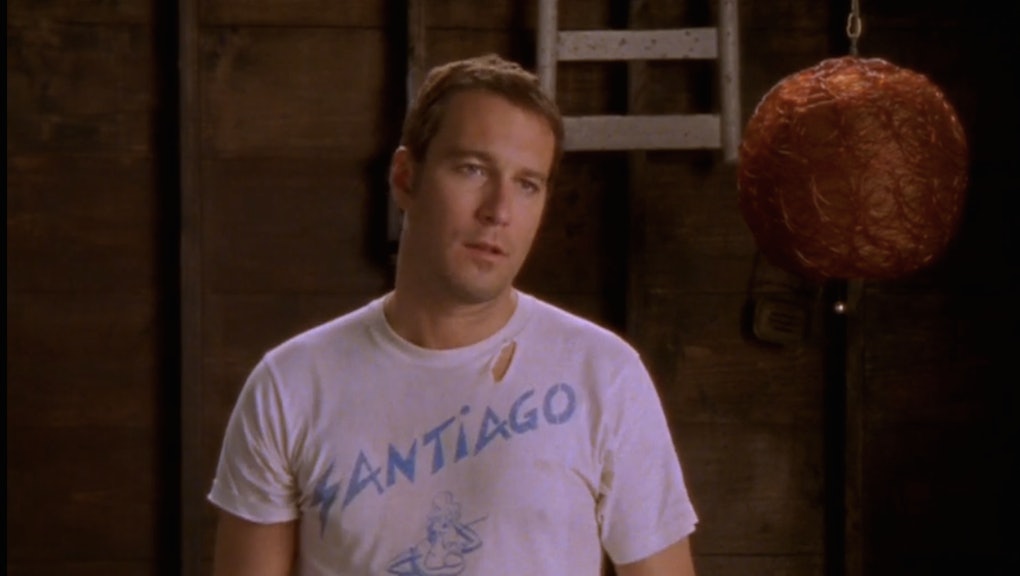 Let Us Now Praise the Aidan, the Early-00s Equivalent to the Softboy

There's a scene in Sex and the City where Carrie's boyfriend Aidan tries to resolve a moment of tension by pointing to her heart and asking, "How do I get in there?" It would be a totally cringe-worthy line, if Aidan wasn't also gorgeous and furniture-building and dog-owning. That moment is sort of the quintessence of what it means to be an Aidan.

The Aidan is a male archetype that's been around for a while. There are plenty of fictional examples of Aidans: Noel from Felicity, Ben Wyatt from Parks and Recreation and Jim Halpert from The Office are all good men who are probably a bit too aware of their goodness. More recent examples include Michael Cordero from Jane the Virgin, Chris O'Dowd's character in Bridesmaids and Ike Barinholtz in Sisters. All of these characters are dedicated to being support systems for women like the characters played by Kristen Wiig and Gina Rodriguez and Amy Poehler, who have big dreams and big hair and are the right combination of exciting, emotional and self-destructive. These men pride themselves on being stabilizing factors in the lives of crazy, spiraling-out-of-control women.

The Aidan is now making a resurgence, largely due to the fact that Amy Schumer is currently dating a bona fide Aidan. Her new guy, Ben Hanisch, builds furniture and has a dog, which are Aidan traits in the way that meat and mustaches are Ron Swanson traits. Not all Aidans make chairs or have pets (though usually, they're pretty good with their hands). But there are a number of other identifiable traits.

The Aidan is proudly sensitive, almost outrageously so. A lot of what it is to be an Aidan aligns with the "softboy," a person who is, as Alan Hanson puts it, "neither Bro nor Nerd. He is sensitive yet amusingly crass. He doesn't want you to know he has feelings. He wants you to know that he has feelings and he is completely okay with that." He knows that you need him and he loves it, because the one thing that makes Aidan an Aidan is that he needs to be needed.

You know women who are dating Aidans. Women who are with Aidans don't ever talk to their friends about how awful their Aidans are, as most women do with their boyfriends. Instead, they talk about the times they freaked out about work and their Aidans were there to soothe them and cook dinner for them and tell them everything would be all right.

In pop culture, the Aidan is a kind of inversion of the Manic Pixie Dream Girl, the stereotype coined by film critic Nathan Rabin to describe a woman whose sole goal is to enlighten men and introduce them to all of life's beauty. The Aidan is there as a rock to anchor his beloved while she pursues her dreams and experiences lots of anxiety. Her aspirations are the all-consuming bulk of her identity, and his identity is being there to catch her when she falls.

While that relationship might seem beneficial for the object of the Aidan's affections, it sets up a troubling power balance. Carrie, for instance, may be more complex than her Aidan, but he's morally "better" than her, and always will be. Throughout the series, he was always a bit too intent to dangle her transgressions over her head, treating her like she was a petulant child for smoking after she tried to quit, or refusing to forgive her for cheating on him with Big.

Yet there's a reason why we continue to see variations of the trope popping up in popular culture. In the past, women didn't used to need Aidans nearly as much, because they were so often denied the opportunity to have crazy, aspirational, work-driven lives. Yet In 2016, it's acceptable for women to be promiscuous, neurotic and intensely dedicated to their jobs; brazen, career-driven women like Carrie Bradshaw or Leslie Knope or Amy Townsend in Trainwreck have the freedom to pursue their dreams and be vulgar and messy while doing so — and the calm, stabilizing Aidans have risen in direct response to that.

Ultimately, however, the Aidan fosters dependency in his partner by serving as an emotional crutch for her. He's a stand-in father figure telling you he'll love you no matter what, except "no matter what" often means "as long as you listen to whatever I think is right." Whether it's Parks and Rec's Ben deciding for Leslie that they should take a break when she runs for office, Jane the Virgin's Michael telling Jane she shouldn't keep her baby or Aidan buying Carrie a new Mac, even when she repeatedly tells him she wants to keep her old computer, the Aidan exists to tell his partner to do whatever he thinks is in her best interest.

When you peel back the hunky exterior, the Aidan is just as problematic as the fuckboy or the softboy, albeit in an entirely different way. He presents to the world as the most beautifully carpentered chair, but you have to sit in it just right or everything falls apart.