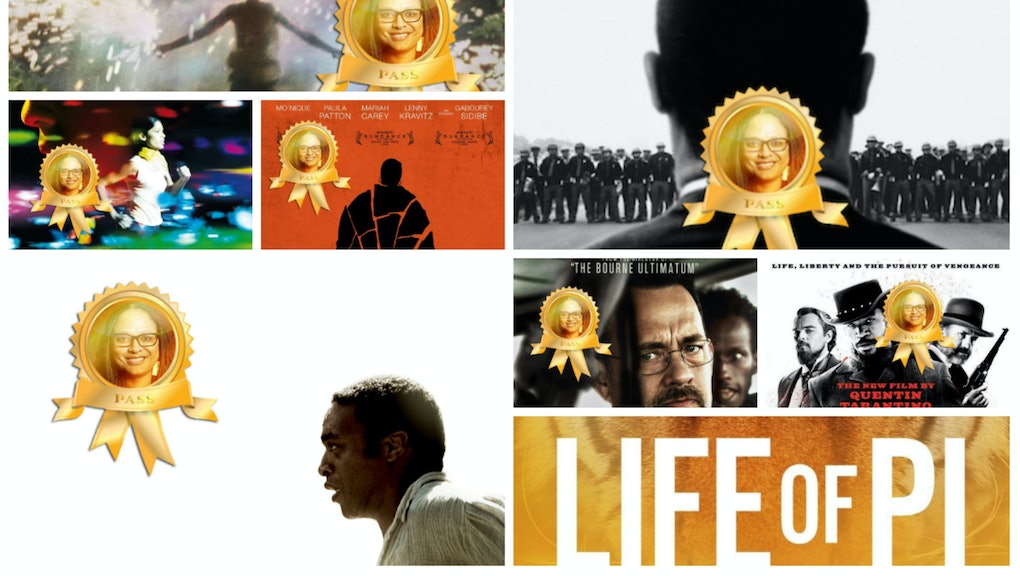 How Many of the Best Picture Nominees From the Last Ten Years Pass the DuVernay Test?

Every year, the film industry circles up and rewards what it considers the best stories told on screen that year. For the last two years, those stories have been considerably white. In light of the growing #OscarsSoWhite movement and in reaction to the powerful Sundance film festival hit The Birth of a Nation, the New York Times film critic Manohla Dargis coined the idea of the DuVernay test.

The DuVernay test, like the Bechdel test for women in film, doesn't measure whether a film is good, bad or revolutionary. It does check whether people of color figure into film narratives.

The criteria for the test are as follows. In order to pass, a film must:

1) Have two named characters of color.

2) The characters must speak to each other.

3) They must not act as scenery in the lives of white people.

There's a lot of films out there, but given the recent #OscarsSoWhite controversy, let's see how many films out of the 78 nominated for best picture in the past decade pass this simple test.

Back in a time when there were only five best picture nominees, selecting two that focused on people of color was a pretty good ratio for the academy. The two films were Babel and Letters from Iwo Jima, and in the case of Jima, the characters even spoke a different language.

Babel is a movie made of four interconnected stories that spans several countries — Japan, Morocco, Mexico and the United States. Iwo Jima is a World War II film from the perspective of Japanese soldiers that served as a counterpart to Clint Eastwood's other film that year, Flags of Our Fathers. Interestingly, while Flags followed the American soldiers' story, it wasn't nominated for best picture.

Nominees: No Country for Old Men (winner), Atonement, Juno, Michael Clayton, There Will Be Blood

Not a single best picture nominee in 2007 told a story centered on a nonwhite character. Unfortunately, it wasn't even a case of a film with characters of color missing out: looking at the other films with multiple nominations — Ratatouille, The Diving Bell and the Butterfly, The Bourne Ultimatum and La Vie en Rose — there's nary a character of color in sight. Take a look at your choices, 2007.

Thanks to Slumdog Millionaire, not only do we have a best picture nominee with several characters of color, we also have a best picture winner that centered on a nonwhite narrative. The film centers around Jamal Malik (Dev Patel) who recounts the real-life tales that allowed him to win the Indian version of Who Wants to Be a Millionaire?

Nominees: The Hurt Locker (winner), Avatar, The Blind Side, District 9, An Education, Inglourious Basterds, Precious: Based on the Novel "Push" by Sapphire, A Serious Man, Up, Up in the Air

This was the first year that the academy nominated 10 films in the best picture category, rather than the traditional five. However, only Precious, the story of a young, poor, black, HIV+ woman who finds independence from her abusive mother and gets an education and custody of her child along the way, passes the DuVernay test. In an interesting side note, while District 9 dealt with themes of race and apartheid, most of the dialogue in the movie is centered around the white South African who grows an alien appendage.

Oof, this may be peak embarrassment. Even in a wide-open field of 10 nominees, not a single film centered around a nonwhite character was able to crack the academy's best of the year. The film Biutiful, which was shot in Spanish and featured a heavily Latino cast, was nominated for two Academy Awards this year — yet is the only film with characters of color that garnered academy recognition that year.

Thanks to The Help, this was not an entirely white-washed year for films. Yet in this crop of best picture nominees, there are only two narratives that don't center around white characters: one about maids, and the other about a horse. While The Help was a major presence during awards season, it made many people uncomfortable that Octavia Spencer won an Oscar for playing a maid 72 years after Hattie McDaniel was the first black actor to win an Oscar for her role as a maid in Gone With the Wind.

Wow, 33% of films pass the test! What a great year 2012 was on the surface. Yet dive in a little further and see that all that glitters isn't gold. One of the 3 films is Quentin Tarantino's n-word-riddled spaghetti Western Django Unchained, which angered more than a few black moviegoers about the liberal use of the racial epithet. Beasts of the Southern Wild also has unnamed beast characters, but is an all-around excellent film that also scored a nomination for its (white) director.

What a great year for film. True, this was a crowd of some of the whitest films in history — including Her, which confirmed that people of color will not exist in the future and Dallas Buyers Club, which privileged the viewpoint of a white, straight man over other groups more historically affected by HIV like gay men, trans women and people of color. But out of those, the academy chose 12 Years a Slave as its best picture winner. Director Steve McQueen's film featured several complex characters of color who were, of course, slaves. Other than Slave, the other nominee is Captain Phillips, in which people of color play marauding Somali pirates.

Nominees: Birdman or (The Unexpected Virtue of Ignorance) (winner), American Sniper, Boyhood, The Grand Budapest Hotel, The Imitation Game, Selma, The Theory of Everything, Whiplash

The only film to pass the DuVernay test this year is, appropriately, from DuVernay herself. Selma tells the story of Martin Luther King Jr.'s organizing of the voting rights march in Alabama from Selma to Montgomery. Overall, Selma only scored two nominations — for best picture and best song for the song "Glory" by Common and John Legend. This was also the first year that the #OscarsSoWhite campaign started thanks to all 20 acting nominations going to white actors.

That brings us to the present day. This is the second year in a row that the #OscarsSoWhite movement dominated news around the Academy Awards, except this time there was no Selma to bring even a bit of color to the best picture nominees. The message is clear: According to the academy, the best stories told in 2015 were not stories about people of color.

Taking a look at the 11 films that did pass the DuVernay test — out of the 78 best picture nominees total over the past 10 years — not only shows a dearth of characters and stories of color, but also a dearth of themes. While it is true that people of color in America, and worldwide, often live on the margins and in economic poverty, the nominees tell a singular story: slaves, maids and pirates. They're abusers and the abused.

Is there room in Hollywood for a mainstream drama that tells a story like Michael Clayton or Room starring people of color? Can we imagine people of color at the center of a narrative that does not automatically cast them as people looking to serve or be saved? Given this year's crop of ultra-white nominees, the future is unclear. But, for now, when it comes to white narratives versus narratives of color — all colors, not just black — the difference is black and white.

Update: February 2, 4:30 p.m. After the publication of this article, two counterpoints came up on social media and in personal conversations, both from this year: arguments for The Martian and Mad Max: Fury Road. In the former case, while there are named characters of color who interact, our position is that all the characters are present in the narrative to save Mark Watney (Matt Damon), a white character. Regarding the latter, there are indeed multiple characters of color, two of whom are the wives of Immortan Joe on the lam (Toast, played by Zoe Kravitz, and Cheedo, played by Courtney Eaton), who share some lines of dialogue.

However, the spirit of the test gauges whether characters of color are granted narratives that allow them to be fully human rather than ornamental. This test exists to hold Hollywood to a higher standard, not to reward filmmakers for cursory inclusion.