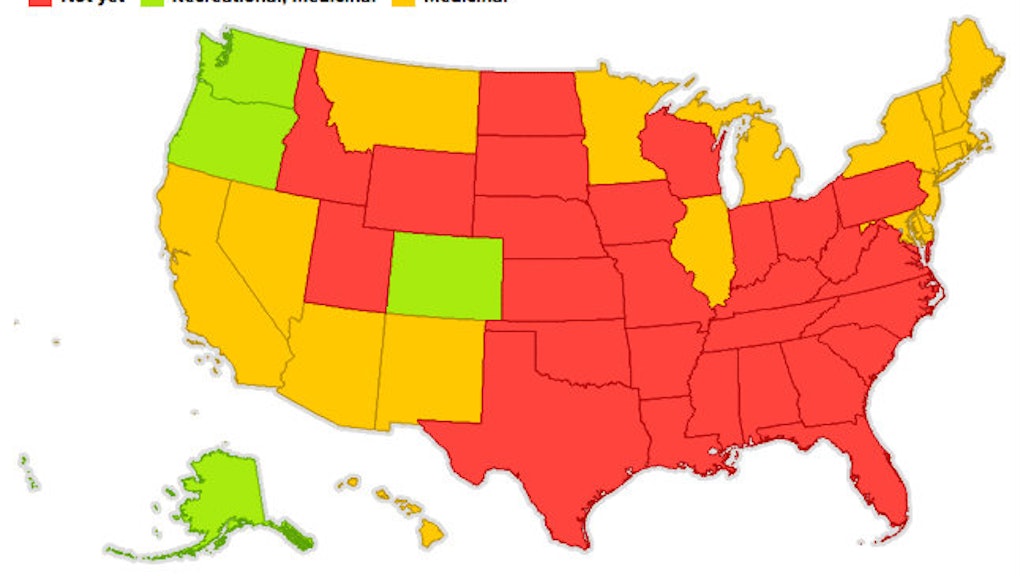 Here's a Map of Every State and Their Marijuana Laws

This year could be a big one for marijuana legalization, with states like Arizona, Maine and Vermont likely to jump on the bandwagon, which is already led by Alaska, Colorado and Washington. As of June, marijuana was legalized in some way in 23 states and Washington, D.C, proving that a revolution is already underway.

But federally, marijuana is still considered a Schedule I drug — along with heroin and LSD — meaning that it has a high potential for abuse. That's left both the industry and consumers in a confusing gray area, since in states like Washington, people over the age of 21 can walk into a commercial dispensary to buy an ounce of marijuana.

President Barack Obama has said on record he supports "carefully prescribed medical use" of marijuana, and reducing incarceration rates from marijuana possession and crime, according to the Huffington Post. Marijuana crimes account for about 30% of drug arrests, advocacy group Norml found. "At a certain point, if enough states end up decriminalizing, Congress may then reschedule marijuana," Obama told Vice's Shane Smith in March.

States where marijuana has yet to be legalized include Kentucky, Florida and Kansas.

The change will probably be worth it. If marijuana is decriminalized, Norml estimates government savings in taxes and law enforcement costs to range from $8 billion to $16 billion per year. And in 2015, legal marijuana sales reached $5.4 billion, which is 17.4% more than 2014's $4.6 billion, according to data from cannabis industry-tracking company the ArcView Group, CNBC reported.

These are states with legal recreational marijuana:

These are states with legal medical marijuana: