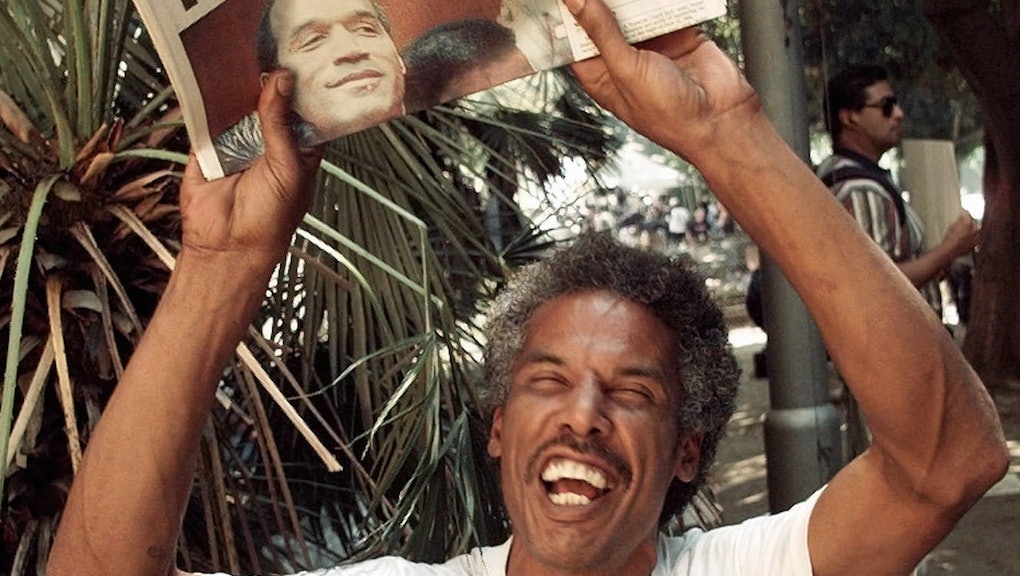 How Race Framed the Conversations Around the OJ Simpson Trial

When the court clerk announced the verdict in the O.J. Simpson trial in 1995, the issue of race was already one of the focal points of the case. "We the jury in the involved entitled action find the defendant, Orenthal James Simpson, not guilty of the crime of murder in violation of Penal Code section 187(a)," the verdict was announced.

By then, 66% of blacks believed Simpson to be innocent of the murder charges that he killed his ex-wife, Nicole Brown Simpson, and her friend, Ronald Goldman, in 1994, according to a 1995 CNN-Time magazine poll. Most whites believed the former football star was guilty, effectively splitting the nation down the middle.

"Most people still believe that the black football legend killed his white ex-wife and her friend, polls show," Jesse Washington wrote in 2014 for the Associated Press. "But for many African-Americans, his likely guilt remains overwhelmed by a potent mix: the racism of the lead detective and the history of black mistreatment by the justice system."

The issue of race exploded in a Jan. 13, 1995 hearing, when defense lawyers sought to prove that lead Det. Mark Fuhrman was a racist, and planted the infamous glove on Simpson. The hearing led to a standoff between then-deputy district attorney Christopher Darden, and Simpson's lawyer, Johnnie Cochran.

"If you allow Mr. Cochran to use this word and play the race card," Darden said, referring to the word "nigger," according to the New York Times, "the direction and focus of the case changes: It is a race case now."

Darden then went on to say Cochran was trying to frame the case around the issue of race, which would have, in his opinion, "upset the black jurors."

Many black Americans felt vindicated when the verdict came back not guilty. Georgetown University professor Michael Eric Dyson, who called the case "extraordinarily important for race relations in America," told PBS' Frontline in 2005.

"I think it was a racial earthquake, so to speak; a race quake. It didn't create racial tension; rather, it revealed the fault lines of bigotry and bias that trace beneath our common lives together," Dyson told Frontline. "But it did reveal to white and black America that, first of all, we see things enormously differently.

"There is contrasting and almost contradictory viewpoints that animate black people and white people around the issue of race, and O.J. revealed that in the sharpest of terms."

Two decades later from the landmark verdict, black Americans appear to have changed their perspectives regarding the case: 53% of blacks believe that the murder charges against Simpson were true, according to the most recent CNN-ORC International survey from 2014.

However, the polling statistics hasn't changed the minds of every black American.

"That pride that I felt, I don't take it back. I don't feel I was hoodwinked," Carlos Carter, who believed Simpson was innocent at the time, told the Associated Press in 2014. "I was just living in the moment, and it was a victory for my people.

"I didn't think of it then, but that's what it was for me. A victory. I could have cared less about O.J., but when I saw him, I saw myself."