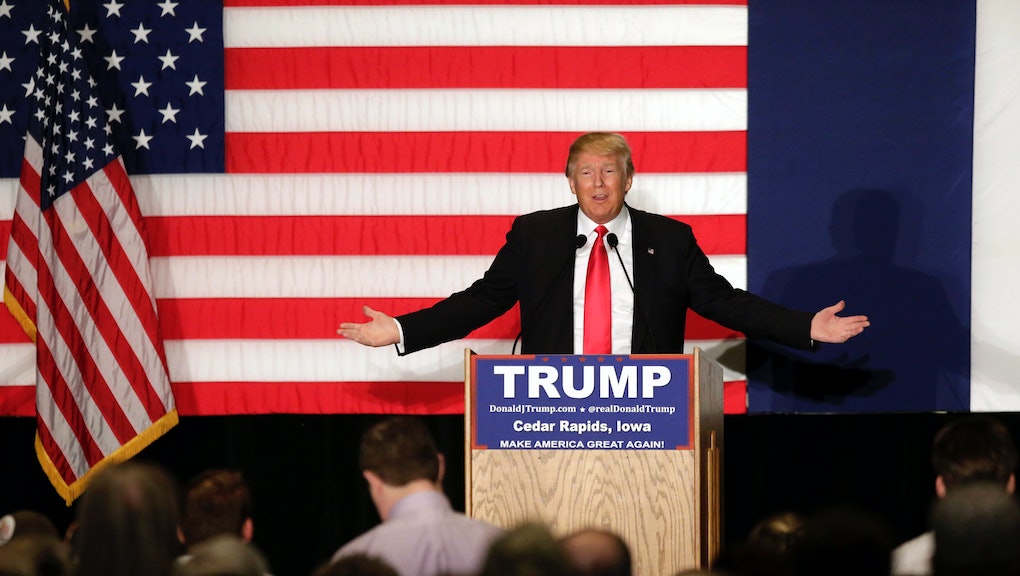 On Monday Republican presidential frontrunner Donald Trump encouraged a rally of his supporters in Cedar Rapids, Iowa, to "knock the crap" out of protesters in the crowd who might throw tomatoes at him.

Trump began his speech by recounting a warning he had received from "security guys" that protesters might pelt him with the fruit, according to Mediaite.

"There may be somebody with tomatoes in the audience," he continued. "So if you see somebody getting ready to throw a tomato, knock the crap out of them, would you? Seriously. OK?"

And then, "I promise you, I will pay for the legal fees. I promise, I promise. It won't be so much 'cause the courts agree with us too."

Indeed, Iowan Andrew Joseph Alemao was recently arrested for lobbing two fat ones at Trump at the University of Iowa, though he failed to make contact.

Gawker's Ashley Feinberg suggested Trump's call to violence on Monday may be illegal, citing Iowa state law, which defines "abusive words ... likely to provoke a violent reaction by another" as disorderly conduct.

It's unlikely Trump cares very much. After a group of his supporters dragged a protester yelling, "Black lives matter," out of a campaign event in Birmingham, Alabama, in November, Trump responded by telling Fox and Friends, "Maybe he should have been roughed up because it was absolutely disgusting what he was doing." On numerous other occasions, Trump's followers have been documented responding to protests with violence or vandalism.