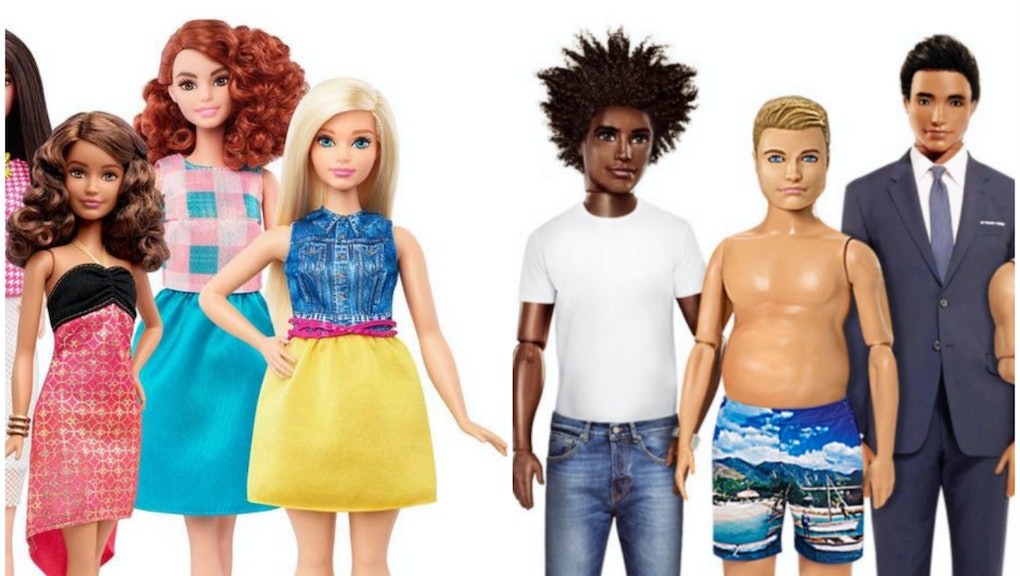 OK, Fine, Ken Can Get a Body-Postive Makeover Too

In January, Mattel announced that Barbie would be receiving a very important makeover. In addition to the classic, disproportionate, blonde Barbie most of us grew up with, girls and boys now have their pick of tall Barbie, curvy Barbie and even petite Barbie, with a wide range of skin tones, eye colors and hair textures to choose from.

Overall, it was a win for doll diversity. But it left some people across the web asking one very pressing question: What about Ken?

Now that Barbie came in all shapes and sizes and colors and styles, what's a poor little male doll to do? Well, the clothing company Lyst has come up with a solution.

On Tuesday, Lyst tweeted out a picture of a set of male dolls in a variety of shapes, colors and styles. Just like the new line of Fashionista Barbies,  these Ken dolls all have a different style: Instead of the classic Ken with the buff figure and clean-cut look, there could now be hipster Ken, or dad bod-on-vacation Ken or even balding Ken (who admittedly looks a lot like Kevin Smith). There's afro Ken and tiny Ken, complete with a hot pink tank top and itty bitty shorts.

"Taking the new Barbie lineup as a starting point, we tried to mirror some of her changes, while adding in some distinctly male realities," Katherine Ormerod, Lyst's editorial director, told Mic. "Not all men have a six pack, thus the 'dad bod' belly. Equally not all men can boast a full head of hair, so we wanted show that with the balding hairstyle. "

So, want a Ken doll that looks like your hipster ex-boyfriend? Just take a look at that little bearded dude in the flannel shirt.

According to the Guardian, the dolls come from a collaboration between Lyst and artist Jamie Phillips. Unfortunately, for now, the dolls aren't real dolls available for sale. "Right now there are no plans to actually produce the Ken dolls, but if we see enough demand then who knows," Ormerod said.

However, the clothes seen on these diverse set of dudes are actually for sale on Lyst right now. "We used data on the most popular menswear products from the last 12 months to determine the outfits for each doll, then added some fun final touches like Hipster Ken's pin-up Barbie tattoo," Ormerod said.

Talk about a solid marketing technique, right? After all, there is demand...

For anyone who has any doubt that Ken really needs this makeover at all, consider Yale University psychologist Kelly Brownell's report in 2006, which noted that to achieve Ken's measurements, most men would have "to increase 20 inches in height, 11 inches in the chest and 7.9 inches in neck circumference." So yeah, just like Barbie, Ken's body is pretty bogus.

Of course, there are arguments over how crucial body positivity is for a male doll vs. a female doll. "Ken's body is less political than Barbie's, because men's bodies aren't as politicized as women's," wrote Carolyn Cox of the Mary Sue. "We should also acknowledge that the work left to be done isn't equal, and that men already have far better and more diverse representation than women do."

But body confidence is also a reality for men, and there may very well be kids out there who want a doll that looks more like their dad (or their best friend's hot hipster dad) and who doesn't need more reminders to be tall, strong and buff.

So Mattel, take a look — if you're contemplating your next doll makeover, a diverse Ken might not be a bad idea.