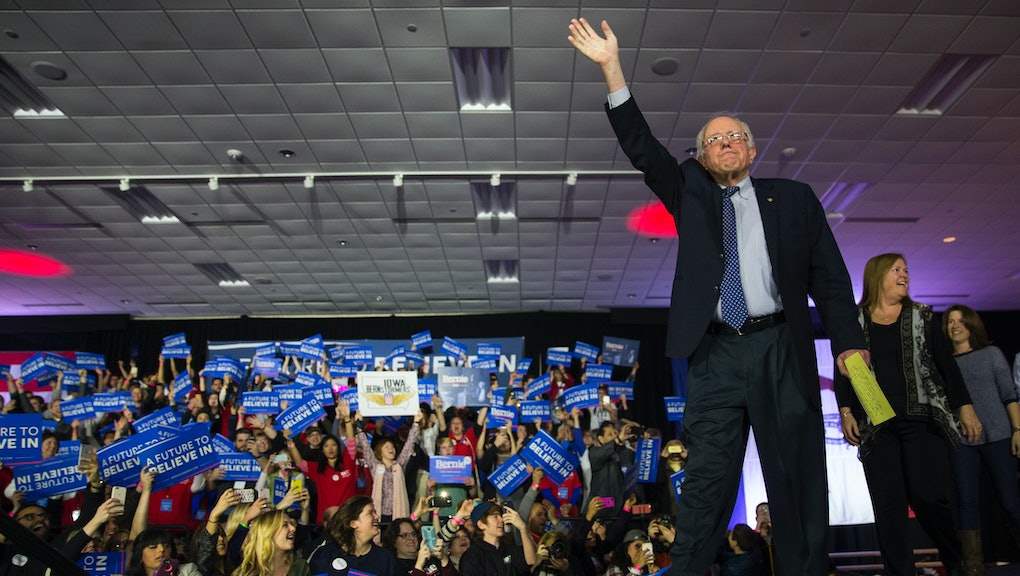 On Monday night, Sen. Bernie Sanders' self-proclaimed political revolution fell short of the mark. Despite enormous buzz, a surge in the polls and a ferocious organizing push in Iowa in the days leading up to the caucuses, the Vermont senator was unable to surpass Hillary Clinton in the first nominating contest of the primary season. When all the votes were counted at the end of the night, it was revealed that he had lost the state by .2%.

Sanders' loss, narrow as it was, disappointed some of his supporters on the left, and tempered some expectations regarding his prospects as an outsider. In 2008, Barack Obama's decisive victory in the Hawkeye State was legendary, driving record turnout and demonstrating how a relatively unknown politician with some very conspicuous disadvantages — his race, his inexperience in Washington — could still make it in one of the toughest contests of the nomination process. Last night, Sanders was unable to marshal the grassroots movement surrounding his campaign to achieve similar results.

But looked at through a wider lens than Iowa's vote count, Sanders' loss was nothing short of a resounding success. Sanders wasn't just a relatively unknown senator a year ago — he was considered by a number of mainstream political analysts to embody a set of ideals that had no place beyond the margins of American political life. His unrepentant democratic socialism, his disinterest in negative attacks or personality-driven campaigns, and his grassroots theory of change was not just considered a longshot, but a bit unhinged.

Yet ultimately his unorthodox campaign has become a substantive challenge to a candidate who at one point appeared to be the most dominant non-incumbent candidate in modern American political history. Regardless of how Sanders fares in the coming primaries, his rise to prominence and formidable performance in Iowa are far more significant than the exact margins of victory or loss that he racks up in the coming months. And it already marks a victory for progressives who wish to expand the boundaries of this country's political imagination.

1. Iowa showed that being a real progressive isn't disqualifying.

There's nothing entirely unique about the emergence of a political outsider who threatens to outflank the dominant establishment nominee from the left in the run up to the Democratic primaries. With the exception of Barack Obama in 2008, these candidates usually flame out quickly. But Sanders' candidacy is still striking, mainly because he has managed to inject some deeply progressive — and by some measures, radical — themes into the political conversation more successfully than anyone has in decades.

Sanders is somebody who unapologetically identifies as a democratic socialist in a country devoted to one of the most conservative interpretations of capitalism in the modern world — and has been an eager defender of the political philosophy. He has repeatedly proposed that the financial sector is not just out of control but fundamentally amoral — "the business model of Wall Street is fraud," he bellowed during a Democratic debate in November.

He's willing to buck the assumption that any popular candidate must be a fervent believer in American exceptionalism by constantly pointing to northern European nations like Sweden as a model for health care, education, child care and other domestic policy reforms. In a terrorism-obsessed nation he has consistently named climate change as the world's greatest national security threat. And against the backdrop of a steadily improving economy he has managed to make income and wealth inequality one of the foundational themes of the entire 2016 presidential race.

Sanders has carved out a new opening for dyed-in-the-wool progressive politicians and policy ideas.

Despite how far these ideas lie outside the mainstream, Sanders was able to gain enough traction that he tugged Clinton to the left on everything from money in politics to Wall Street regulation, and then just about split Iowa with her. This should be a wake up call to the Democratic Party: Regardless of what happens this primary season, Sanders has carved out a new opening for dyed-in-the-wool progressive politicians and policy ideas.

2. Sanders has a shot at the nomination without the backing of the 1%.

Sanders' railing against the billionaire class and Wall Street has ensured that relatively few 1 percenters have donated to his campaign. He's loathed by bankers and the top contributors to his campaign committee are unions. He has refused to give his blessing to a super PAC. (Although he has benefited from nearly $1 million in unsolicited advertisements run by a super PAC organized by National Nurses United.) And yet, despite scaring away the most reliable sources of funding assumed to be required for taking on the obscenely expensive enterprise of running for national office in this country, he has managed to pull in tons of money and finance a very respectable ground game.

That's mainly because Sanders has proven to be an extraordinary grassroots fundraiser. In January, Sanders raked in an astonishing $20 million, and the total number of campaign donations he received surpassed 3.2 million — a record for this point in the presidential campaign. It was only the latest record of that kind he has set. For the last two quarters of 2015, Sanders raised just a few million dollars less than Clinton (not including the boost she gets from a network of super PACs). The average donation he's received in recent months hovers around $27.

These numbers are all the more remarkable because Sanders' hasn't just bucked the support of the financial sector — he's also not received votes of confidence from the party establishment. Currently Democratic superdelegates — party officials and elected members of the party like congressmen who are free to back whichever candidate they wish to — back Clinton over Sanders 359 to 8. While roughly half of the remaining superdelegates who will vote at the Democratic National Convention in July are still undecided, their early drift toward Clinton represents how much more favorably party insiders view her candidacy. That metric is a useful proxy for the kind of donations that are flowing to her from reliable Democratic donors with big wallets — money that isn't flowing to Sanders.

3. Sanders showed he can run a positive, substance-focused campaign and still be popular.

Early in his campaign, Sanders pledged to avoid personal attacks and exploiting gaffes. It seemed like a reckless act of self-sabotage: How could an outsider swear off the use of personality-centric criticism that plays so well against a frontrunner who has one of the most fraught relationships with media of any living American politician today?

Sanders has largely remained true to his word. His campaign has been relentlessly focused on his policies and values, and references to Clinton have come through the prism of policy disagreement. During the first Democratic debate, he immediately shut down a question about Clinton's use of a private email server as secretary of state: "Let me say something that may not be great politics, but I think the secretary is right, and that is that the American people are sick and tired of hearing about your damn emails," Sanders said to a roaring crowd. "Enough of the emails, let's talk about the real issues facing America."

Sanders has changed his tune a bit in recent weeks. His January television spot contrasting Clinton's and his own Wall Street plans struck a middle ground between traditionally positive and negative advertising, and lately in speeches he's been significantly more overt in linking Clinton to the political establishment that he detests.

But by and large Sanders has refused to play the usual kind of dirty games that dominate electoral politics, and has performed well all the same. The effect has been to prove that popularity and a dignified, substance-centric presidential campaign aren't mutually exclusive. That's been the case for Sanders in general — testing assumptions about what a serious presidential candidate can and can't do, and proving repeatedly that going off the beaten path wouldn't immediately torpedo your chances at being taken seriously as a contender for the White House.

In the process, he's shifted the Democratic policy debate to the left and built a movement that will outlast his candidacy— as Jamelle Bouie at Slate noted, "Sanders is already a historic candidate — the first socialist in a century to build a genuine mass movement in American party politics."

There's a very good chance that like many outsiders before him, Sanders will be vanquished in the next few nominating contests. But it's worth taking a step back and remembering the bigger picture — early in 2015 very few people thought that a democratic socialist who only cares about talking policy and advocates for class war would be received with anything other than laughs from serious voters. His campaign has been anything but a joke.