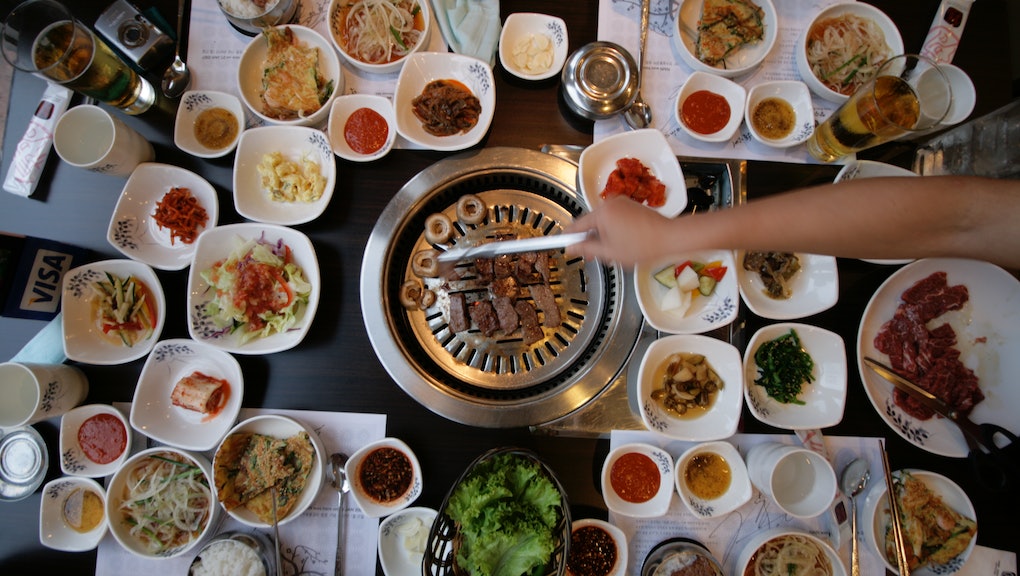 Had I been in a Thomas Pynchon novel, this scenario would have undoubtedly been the start of a postmodern adventure. But even in Shilla, a Korean barbecue restaurant in the very real surroundings of midtown Manhattan, I was skeptical that the Death Café I RSVPed for wasn't the stuff of fiction.

I followed another woman up the stairs, which led into a main dining room. About 15 other people were already seated at tables in groups of four, sipping tea and chatting. I ended up at a table with the woman I followed inside, whose name was Kathryn McKinney. Making small talk, we asked each other about what brought us to the cafe. She told me she had lost her brother, unexpectedly, a month earlier and her mother eight years prior to cancer. I was immediately embarrassed by my answer: I'd come purely out of curiosity.

Read More: What It's Like to Go to Couples Therapy With Your Adult BFF

The concept of the Death Café was inspired by Swiss sociologist and anthropologist Bernard Crettaz, who established the first "cafe mortel" in 2004. The idea was to discuss death casually with strangers over food and drink with the hope that people would talk more about the subject in their everyday lives. Inspired, a man named Jon Underwood popularized the death cafes in London and since, there have been over 40 different iterations of the original model in England, the United States, Wales, Australia, Brazil and Canada.

The New York City Death Café meets every third Wednesday of the month, posting details on time and location on their Meetup page.

Instead of cake, the standard fare at a cafe mortel, at Shilla we passed around small plates of kimchi, cold noodles and mixed vegetables as top-40 hits blared over the speakers. Nancy Gershman, who has co-hosted the cafe since 2014, lamented they couldn't lower the volume and that we didn't have the space to ourselves. Hungry New Yorkers eventually filled the remaining tables, happily unaware that the New Yorkers beside them were there to talk exclusively about mortality.

There were tangential sidebars about a scene in Monty Python and the Holy Grail and a 1985 movie called Shadowlands about the death of C.S. Lewis' wife. Mostly, there was laughter.

But the discussion was surprisingly un-gloomy: The conversation flowed seamlessly from religion and spirituality to psychedelics to memory and dreams, extending all the way to metaphysics.

Michael Lees, 23, talked about how our feelings of loss are connected to our (misguided) notions of ownership over ourselves and our loved ones. He said once people get over those ideas, death doesn't become so scary.

"If you can understand life isn't ever something you can own — that it's transient and that you have it for a certain amount of time and it goes away, and there's nothing lost because you didn't have it in the first place — it can greatly improve your quality of life and mental state," he said.

There were tangential sidebars about a scene in Monty Python and the Holy Grail and a 1985 movie called Shadowlands about the death of C.S. Lewis' wife. Mostly, there was laughter.

Gershman often uploads candid photos to the café's website, and said she's always surprised by how cheerful they come across.

"I sometimes worry that [the pictures] give the wrong impression, but those are the people who are probably the hardiest," she told me. "They've been through so much. They realize how ironic death can be, the strong coincidences that can arise with it, how they're doing things they would've thought were peculiar years ago. They're surprising themselves, laughing at themselves and that's completely healthy in our minds."

Still, throughout the event, I worried about McKinney. While most everyone had lost someone close to them at some point, we were talking about death more as an abstract concept; McKinney was dealing with death as a very recent, very tangible reality. My concerns, it turned out, were unfounded. Later, McKinney told me she knew what she was getting into, and it was just what she needed.

"A lot of therapy groups make you choose 'grieving a sibling' or 'grieving a parent,' but both of those applied to me," she said. So, after determining traditional therapy wasn't for her, McKinney sought out alternatives.

"I have to deal with the death of my immediate family so the fact that I know so little about death is interesting to me," McKinney said. "Of course it's the nature of death that you can't know a lot about it, and people have been grappling with that through all of human time."

Despite the seemingly detached quality of the discussion, the consequences of losing a loved one were acknowledged as real and painful and prevailing: Gershman told of one café regular who admitted that when her husband die she made a pact with herself to end her own life on the 10-year anniversary of his death. (Six years later, she remains committed to that promise.)

Gershman said broaching the subject with strangers is one way to overcome the taboo nature of death — and the toll it takes. "Very often it's just not possible to talk about with friends and family or co-workers, so you unload it onto strangers," she said. "The word alone makes some people just shiver and they don't want any part of it."

When she's not hosting Death Cafés, Gershman volunteers at hospice, and works as a memory artist on the side, creating "healing dreamscapes" that she sells to family members and friends of the ill.

Using photo-editing software, Gershman takes existing photographs to create a realistic montage, essentially capturing a new memory to help the "bereaved-to-be" person, as she refers to them, cope with the death of their loved one. Gershman said the three most popular dreamscapes she creates are portraits of the deceased as a role model, of an embellished memory or an "all-out fantasy" including the patient and their loved one or of a "regret that becomes a wish." She got the idea when she realized there were no living grandparents at her son's bar mitzvah.

"Sometimes it can be as simple as moving two people together from disparate photos," she said. "What I'm creating, in some way, is proof of love."

Other cafe regulars boasted an equally diverse array of careers and interests: There was a retired police officer who started writing fiction, an entrepreneur beta testing a program to improve advance directives, a graduate student studying narrative medicine, a video game player who wants to change the way wills are written. At 22, I was the youngest person there; the oldest, 80.

Gershman said she started hosting New York City's Death Café primarily because she had always wanted to be part of a salon. Little did she know that death, though perhaps unconventional, would be the best topic for one.

"It turns out that death is one of the greatest themes for a meet-up because no matter where you approach it, philosophically, religiously, literally, you never really veer off into superficial areas," Gershman said. "It's always endless and it's always deep."