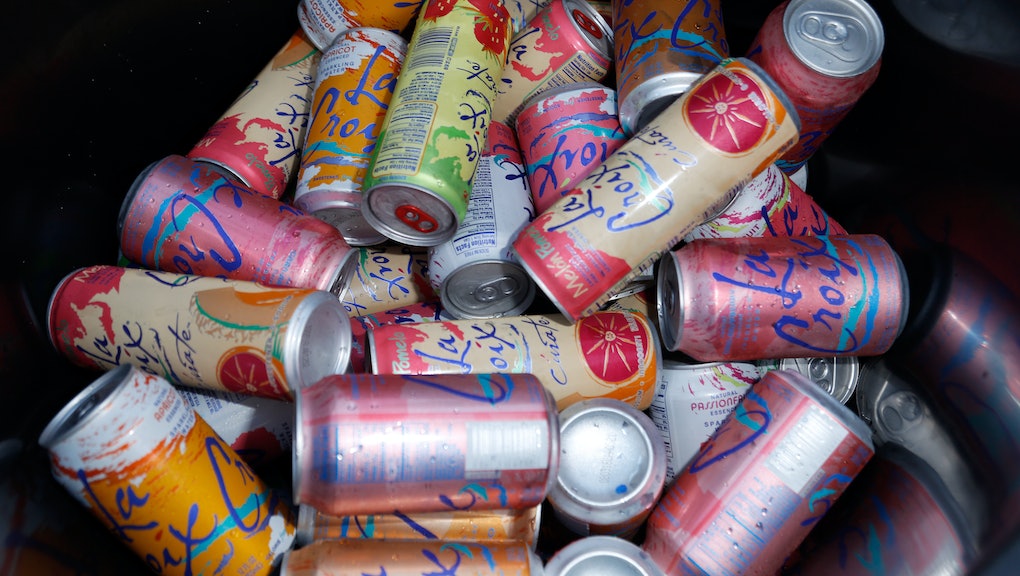 Science Has Bad News for People Who Love Seltzer

LaCroix sparkling water has been hailed a "form of water better than all other waters," but you might want to think twice before grabbing your eighth can of the day.

After drinking an entire 12-pack of coconut LaCroix in a single day — a point she called "rock bottom" — the Atlantic's Olga Khazan did some investigating into what, exactly, our collective seltzer addiction is doing to our teeth.

Her findings weren't encouraging. Soda water is delightfully bubbly because it contains carbonic acid, which can wear way tooth enamel. Added flavors only increase the acidity of the effervescent drinks.

PH values, which measure acidity, run from 0 to 14 — 0 being the most acidic, and 14 the most basic. The pH value of a flat bottle of water is a neutral 7, while the pH value of unflavored Perrier is 5.46, as Khazan points out.

That's not too bad compared to Coke, which clocks in at 2.525, according to LiveScience.

Khazan pointed to a 2007 study in which researchers submerged human teeth in various flavored seltzer products for 30 minutes in order to measure those products' pH levels and observe their effect on enamel. The pH values ranged from 2.74 to 3.34, with "many" in the same range as soda and orange juice. As for tooth decay, the researchers said their findings confirmed that the seltzer products had "erosive potential."

"It is clear that the drinks examined in this study have similar erosive potential to orange juice, and thus, care is required in their consumption as a part of a well-controlled diet," the researchers wrote.

Dr. Sherri Worth, a California-based dentist, told Mic about a patient who was drinking around 10 bottles of carbonated water a day and suffered "decay at the gum line of many of his teeth" that "came from the carbonation and the acidic nature of the water." Worth changed the patient's water intake to a mix of sparkling and regular water, she said, and she now recommends that her clients drink less seltzer and more flat water.

LaCroix, a beloved brand of naturally sweetened sparkling water, doesn't exactly hide the fact that its products are fairly acidic. The company openly acknowledges its drinks are only "slightly less acidic" than standard soda.

The company says on its website: "The pH level of LaCroix varies by flavor and is slightly less acidic than traditional soft drinks, 100% juice and juice drinks, and other typical beverages without the calories! If there are any concerns about your acidity consumption, please consult your physician."

Still, there are worse things, health-wise, than a can of raspberry-lime Polar seltzer. While the acidity level of a flavored seltzer is on par with soda and juice, the calorie and sugar contents tend to be far lower. Brands like Polar and LaCroix are calorie-free, whereas a can of Coke contains 140 calories. Those same sparkling water brands are also sugar-free, whereas a can of Coke contains a daunting 39 grams of sugar.

And they're still loads better than energy drinks: A single can probably won't put your heart at risk.