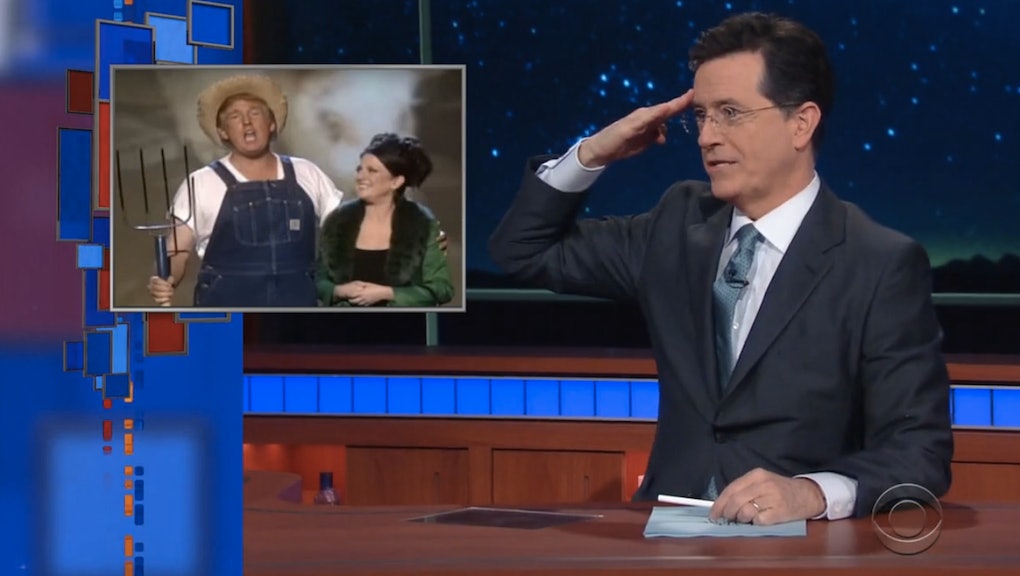 Stephen Colbert Mocks Trump — And Everyone Else — After Iowa Loss

With the wound of a surprise second-place finish in the Iowa caucus not yet healed, billionaire Republican presidential candidate Donald Trump is now feeling the sting of the salt on that wound courtesy of another slice of the American electorate — late night comedians.

Leading the charge was the Late Show's Stephen Colbert, who despite his amicable one-on-one with Trump in September, went full bore at him Tuesday. With some attributing the victory of Ted Cruz to his repeated attacks on "New York values," Colbert took a look at how tabloids chose to cover their once-hometown hero.

And it was not good.

Colbert held up the Daily News and the New York Post, whose covers relished in Trump's defeat (and probably won't be gracing the walls of framed headlines in Trump's well-appointed office).

"These are your 'New York values.' Thanks for sticking up for us, Donald." Colbert said. "Oh, you came in second? Go fuck yourself."

Colbert also could not resist a shot at the caucus' most unlikely star, Florida Sen. Marco Rubio, whose third-place finish was a surprise for wonks everywhere, including Iowa pollster J. Ann Selzer. Rubio, who received his success with a celebratory speech worthy of an actual victor, was Colbert's obvious next target.

"No one is more excited than the clear frontrunner of third place, Marco Rubio," said Colbert, after showing footage of a triumphant Rubio on caucus night. "Apparently finishing in third is a guaranteed path to victory."

Then came the Dems.

The former "fake news" host attributed Hillary Clinton's razor-thin victory to a man named "Carl," and made light of the numerous coin tosses that may have put her candidacy over the top. There were reportedly six coin tosses that evening in Iowa to separate precinct deadlocks — all of which Clinton won, though other accounts have disputed that fact.

"The Democrats picked the winner last night the same way roommates decide who has to drive to Taco Bell," he said. "Bernie's trash talking money and politics so much that now the coins have turned against him."

With Trump's rivals sensing weakness after his Iowa fumble, the knives have come out in the lead-up to New Hampshire — an event primary polls have given to Trump for months. But polls also gave him Iowa, so who can say? At least we know that whatever the results, Colbert will have some words.