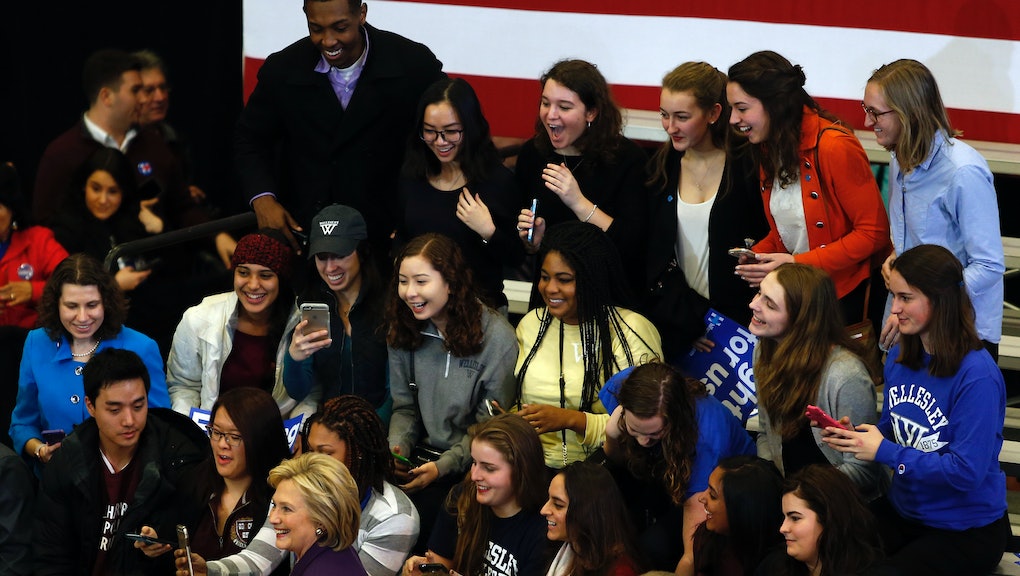 The 2016 Electorate Will Be the Most Diverse in History, Spelling Trouble for the GOP

The voters who will elect the country's 45th president in November are likely to be the most diverse yet, with racial and ethnic minorities making up nearly one-third of the eligible voter pool in the United States, a new study finds.

According to the Pew Research Center, non-Hispanic whites will account for 69% of the 2016 electorate, down from 71% in 2012 and 78% at the turn of the century. African-Americans, Hispanics, Asians and other racial and ethnic minorities will comprise 31% of eligible voters this year.

Crunching the numbers: What's behind the changes? Pew notes that whites, who skew older, are dying at higher rates, while whites only account for 57% of newly eligible 18-year-olds between 2012 and 2016. Meanwhile, other racial and ethnic minorities are gaining the right to vote by becoming naturalized citizens. Pew finds that 60% of newly eligible Asian voters gained the franchise through naturalization, as did 26% of newly eligible Hispanics.

Why it matters: The changing demographic makeup of the American electorate underscores the considerable structural challenges confronting the Republican Party in the fall.

Writing in National Journal in July, the electoral analysts Charlie Cook and David Wasserman noted that if the 2012 election had been just 70% white, with all other variables held constant, President Barack Obama would have defeated GOP nominee Mitt Romney by 5.4 percentage points in the popular vote, compared to his actual 3.85-point margin of victory.

What's more, Cook and Wasserman observed, whites without college degrees — a key GOP demographic — are seeing their share of the electorate shrink at a faster rate than whites with at least a bachelor's degree, who also lean Republican but by a smaller margin.

So how does the GOP overcome these structural obstacles? Say the 2016 nominee did no better than Romney did with Hispanics (27%), African-Americans (6%) and Asian-Americans (26%). In order for the Republicans to win the popular vote this year, their nominee would then need to win 64% of the white vote, GOP strategists Glen Bolger and Neil Newhouse wrote in the Washington Post.

Broadening the base: Those hard demographic realities leave the GOP almost no viable path back to the White House without boosting performance among racial and ethnic minorities, particularly the fast-growing Hispanic population. It's unclear the party will do so this year.

Businessman Donald Trump, who sustained a blow when he lost the GOP caucuses in Iowa on Monday but is favored to prevail in New Hampshire's primary next week, threatens to drive down the Republicans' performance among Latinos even further. Trump, who launched his campaign with a broadside against Mexican "rapists" coming over the U.S. border and has promised to deport all 11 million undocumented immigrants in the country, was viewed unfavorably by 80% of Hispanics in a Public Religion Research Institute survey released in November.

Though Hispanics tend to turn out to the polls at lower rates than non-Hispanic whites, many analysts predict that a Trump nomination would send Hispanics to the ballot box in droves to support the Democratic nominee.

Trump's chief rivals, Cuban-American Sens. Ted Cruz of Texas and Marco Rubio of Florida, are less well-known among Hispanics, the PRRI poll found, although they're viewed more unfavorably than favorably by those who have formed opinions of them. But Rubio, who helped lead the Senate's efforts to pass a comprehensive immigration reform bill in 2013, has shown more of an inclination to reach out to less traditional GOP voters.

Speaking to supporters in Iowa after his robust third-place finish there Monday, Rubio emphasized the importance of broadening the GOP's appeal.

"When I'm our nominee, we are going to grow the conservative movement," Rubio said. "We will unite our party, we will grow our party and we will defeat Hillary Clinton or Bernie Sanders or whoever [the Democrats] nominate."

According to an NBC News/Wall Street Journal poll released in December, Rubio would nab 36% of the Hispanic vote to Clinton's 59%. Trump, meanwhile, trailed Clinton 24% to 69% among that group.