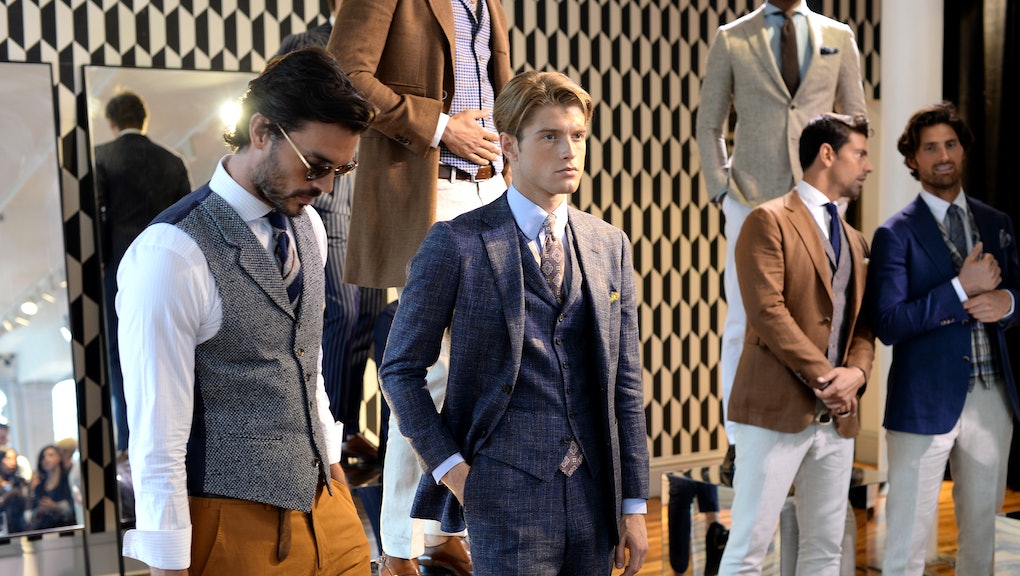 New York Fashion Week: Men's, as it's formally called, is the annual gathering of fashionable dudes and designers, where critical decisions are made on whether it's cool or not for men to wear skirts yet or if suits will get slimmer or bulkier in the coming year. As the Devil Wears Prada probably taught you, what you see on the runways will eventually, in some way or another, end up on the shelves of Target or J.Crew.

But as men's Fashion Week draws to a close this week, have fashion designers been paying attention to what men want from their clothes?

To answer that question, Mic reached out to readers via Tumblr and Google Forms and asked them to answer the question, "If men's clothes were designed for what guys really need, what would they look like?" Would skirts be totally cool? Would pink be back en vogue? Or are materials that don't itch and a roomy crotch pretty much the most important things?

The answers may surprise you — or maybe not. Did you know plenty of men are craving "stylish dress shoes [that] don't need the soles broken in before you stop sliding across hardwood floors like Brian Boitano?" And that two guys wanted capes?

Men are really, really concerned about their crotches, guys.

The most popular complaint from the men we surveyed was that clothes just don't accommodate, appreciate or properly cradle their most important possession: their schwang. As a 28-year-old male told us via Google Form, he just wants a pair of "jeans that leaves room for [his] junk."

"How about pants that acknowledge the fact that men have penises?" asked straightforward Tumblr user phwiti-pettirosso-rotkehlchen.

Indeed, ripping in the crotch area is a big concern, according to Tumblr user thecaptainsantana who really just wants "more variety, a little bit more adventurous design wise and jeans that do not tear apart in the crotch area."

Tumblr user craigery96 wrote to us saying that he'd love "pants that would not squeeze my balls or rip when I squat to grab something."

A totally valid request. In fact, maybe it's time for pants to come to the rescue when a man gets... aroused?

For Tumblr user dunkytits (great name), what he really wants is "a slot that you can put boners in that hides them so you don't have to embarrass yourself." How innovative! How thoughtful! As far as we know, no designer at Fashion Week has addressed this pressing need, but they should! (Well, besides this one.)

It's got to be hard: After years of the swinging trend pendulum between baggy cargo pants and skinny jeans, there are plenty of men who just seem to want pants that fit right. And things these days are too damn small.

For one 29-year-old male responder to our Google Form, all he wants are "fashionable suits that aren't cut for men who have the proportions of 13-year-old boys." He continued, impassioned: "Seriously. This obsession with 'slim cut' suits has, over time, gotten out of hand. Who are men's designers designing for? Are they trying to give me an eating disorder? There's a difference between a well-cut, nice-fitting, sharp, respectable suit, and looking like you decided to say 'fuck it' and pass off the same tiny suit you wore at your bar mitzvah as fashionable."

We agree! (Although we are almost positive you looked totally great and fine at your bar mitzvah.) For Tumblr user celestial-rising, it was more of a want for there to be more sizes overall to ensure a better fit. "You find something perfect you want to wear and it hardly ever comes in your size. (S, M, L)" he wrote.

Unfortunately, the Fashion Week runways this week were pretty much all slim-fit, laser-cut all the time.

... and clothes that aren't way too big.

For the bigger guy, there's a problem with overall fit, as clothing tends to be scaled up to the point where shirts become gigantic, billowing, unflattering boxes at larger sizes.

That's according to what Tumblr user forgotn1 wrote us, anyway. "They desperately need to understand that making bigger sizes isn't about just multiplying the measurements," he wrote. "Me wearing a 4XL doesn't mean that my arms grew 10 inches, it just means I have a big stomach. Also, tall should mean more than 2 inches longer." So many issues we had no idea about, but seem totally valid!

Oh, and the runways were pretty obsessed with oversized clothing this time around so... better luck next time?

Men also really care about their butts being comfortable.

Well, this is something ladies can also completely get. Tight pants suck and room for ya butt should be considered a constitutional right. For one 26-year-old male Google Form responder, it was all about the behind, specifically "skinny jeans with room for a man's butt."

Tumblr user everyonesalemon chimed in with a butt-centric need, asking for "jeans that are stretchy enough to move around in, and don't rip at the crotch. Underwear where the fabric tag at the back doesn't dig in and itch at your ass crack." A very wise observation indeed.

We need T-Pain on the case immediately.

Shoes that are actually useful — for every situation.

Too many men's shoes stick to a few modes: hyper-rugged for outdoor adventuring (or just urban lumbersexual-ing), sneakers for working out and fancy dress shoes that are barely comfortable for walking at all. And there are some functional adjustments some men would like.

Tumblr user celestial-rising wants another functional option. "More tennis shoes that are more on the 'dressy' side..." he wrote. "Adidas has come out with some amazing ones before."

And when it comes to looking nice, said a 36-year-old dude via Google Form, there's a need for "stylish dress shoes which don't need the soles broken in before you stop sliding across hardwood floors like Brian Boitano."

And just like for women, pockets should be huge.

It's pretty widely known that men's clothing comes with an excess of pockets and pocket space. There's the nifty little one on the inside of men's jackets, jeans with functioning front pockets (a woman's dream), cargo pants with like six trillion pockets everywhere. And yet there's still room for improvement.

"They should have pockets that don't look like shit when we put our overstuffed wallets in them," Tumblr user sickfuck (yet again, great name) said of his ideal pair of pants.

And some men still want even more. "[I want] pockets, lots of pockets, in shirts jackets and pants, in all sizes and shapes," wrote Tumblr user zennim. Same, dude!

Unfortunately, on the runway this week, it was pretty common to see men in dresses, and particularly in dresses with no pockets at all. Welcome to many women's hell, boys.