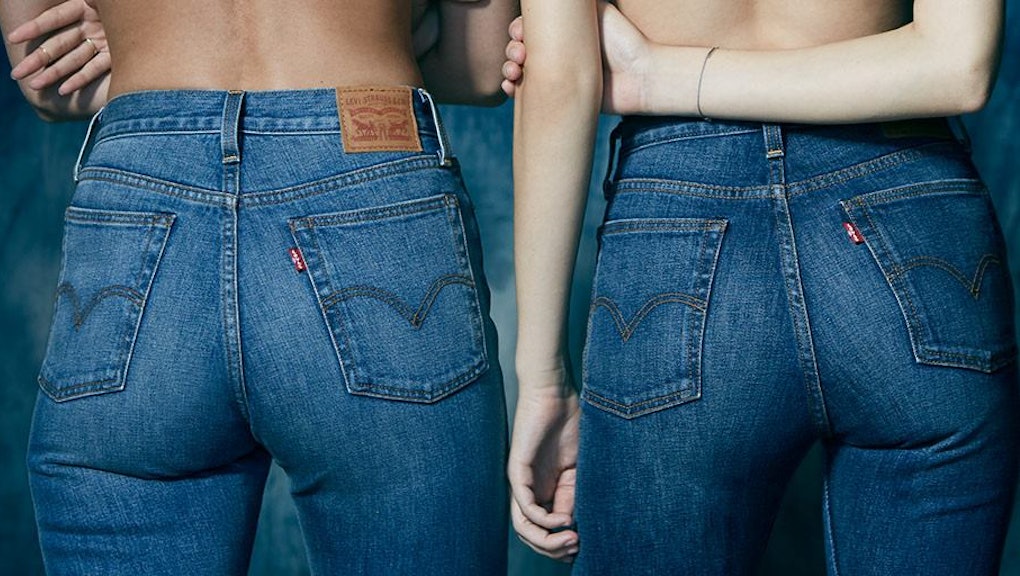 Your Butt Better Be Damn Perky, Even If It Takes Levi's New "Wedgie Jeans"

In January, famed denim brand Levi's launched a new style called Wedgie Fit Jeans — yes, really — that feature a high waist, a tapered leg, room for the hips and a sharp crease along the center of the backside that quite literally promises you (and accentuates) a rather uncomfortable tightness.

Frankly, as many outlets pointed out, they're pretty much mom jeans. But one thing makes them unique: Instead of a baggy, unflattering butt, Wedgie Fit Jeans are so tight they'll give you a wedgie — and, in the process, the perkiest butt possible.

And there's one celebrity in particular who's given wedgie-style jeans her stamp of approval: the one ...

At just 18 years old, the social media icon is bringing an appreciation for a pert and perky bottom to a new generation of girls. It's not just a round butt, but one that bears near-identical resemblance to the peach emoji, and it gains its true shape from being paired with a skinny, nipped-in waist.

And apparently, it's worth getting a wedgie for.

Whether thanks to photo editing or sneaky styling tricks, Jenner's figure has come to represent a new ideal. She's the hourglass incarnate, not only with ultra-feminine curves from top to bottom, but with toned muscles and perkiness to complement those curves in all the right places. It's a "new and improved" version of a modern beauty standard, one ushered into the mainstream thanks to women like Jennifer Lopez and Beyoncé, but now made utterly viral and inescapable by Jenner and her massive social media influence (49 million Instagram followers, 14 million Twitter followers and counting).

You can see the desire for perky, curvy butts not only with clothing like Levi's, but in our fitness trends too. Barre classes that promise to lift and tone have exploded, with women across the country focused on workouts that promise a round, very perky butt along with a strong, slim core. Fitness icons like Jen Selter and countless other trainers on Instagram also advocate for a (as a barre instructor would put it) strong seat.

As Jenner has shown, that booty is also meant to be paired with a tiny waist, a priority reflected in the rise of waist trainers as well as special slimming garments. In October, the youngest Jenner posted a picture of herself on Instagram in a pair of Spanx that slimmed down the thighs and waist but apparently have holes in the butt so her backside could protrude.

By slimming the waist and enhancing curves, the butt and breasts are naturally accentuated. As Racked wrote of the barre class phenomenon Pop Physique, which embraces a butts-everywhere aesthetic, "It's all intended to be sexual, without a doubt."

But the rise in corsets to create curves or workout classes that can mold you to emoji-level perfection should be an important reminder: Not all women already have this kind of body, and it's not easy to obtain. In fact, plenty of women can work out for hours and never mold their bottoms into ones that look like Kylie's — because, unshockingly, body shapes can't be treated as mere "trends."

Levi's Wedgie Fit Jeans, however, are all about getting there. In a Glamour article in which one very brave woman tries the new pants, she approvingly observes her new figure and states, "I'm kind of having a Kylie Jenner moment." Tellingly, Jenner hadn't even posted the Instagram photos of herself in the Levi's yet.

Celebrating more diverse body shapes is inherently good, especially considering how long the skinny standard has reigned. When women like Beyoncé and Jennifer Lopez made celebrating curves more widely accepted more than, say, 15 years ago, we had just experienced the boom of "heroin chic," a look that had women striving for Calista Flockhart-level thinness. A curvier norm certainly is a healthier standard in many ways. And yet, still a standard reigns — a body type that excludes most women's natural figures and prompts women to pursue a more trained, slimmed-down look to fit the "trends."

However pleasant it may be to report that acceptance of curvier butts is here to stay, they're also expected to be more perfect than ever before.