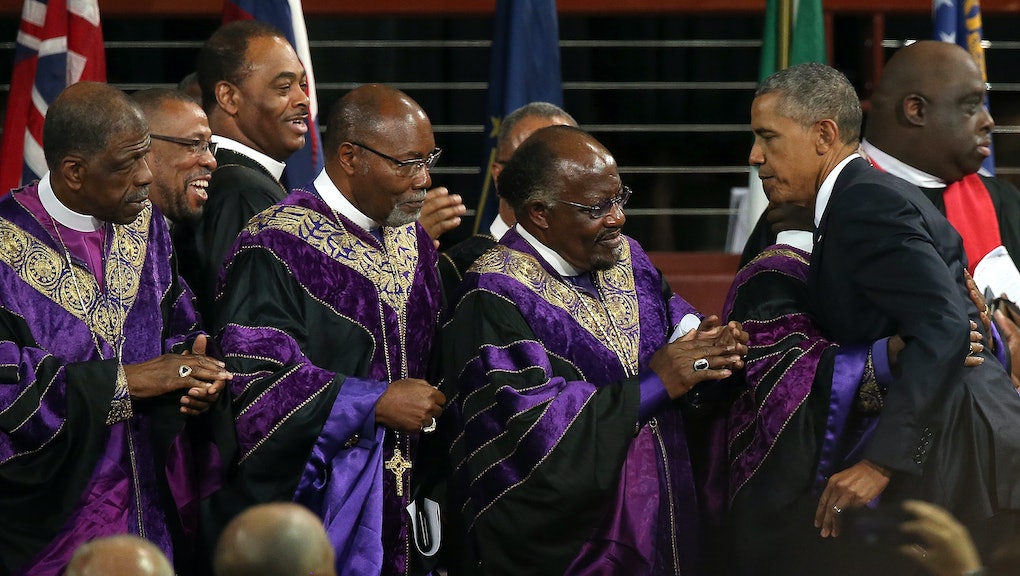 11 Images That Prove Obama Is the Worst. Muslim. Ever.

It hasn't taken long since news broke that President Barack Obama will visit the Islamic Society of Baltimore on Wednesday for people to start their usual chorus of "Obama is a radical Muslim!"

It's unclear where people are getting all this evidence that points to Obama's Muslim identity or even his involvement in Islamic fundamentalism.

If one scans the appearances and activities of his presidency, one thing is clear: If Obama is a devout Muslim — let alone a radical one — he's not very good at it.

For those reading the headline and seeing that Obama is visiting a mosque, they may be missing one major point: This is his first visit to a U.S. mosque in his seven-year tenure. Obama has, however, taken several trips to Christian houses of worship. This includes his rousing rendition of "Amazing Grace" — basically the national anthem of Christianity — in front of the entire congregation at the Rev. Clementa Pinckney's funeral.

2. He's not praying before dawn.

Of the five times a day a Muslim is called to pray, the first is predawn. Here is Obama not praying before dawn.

3. He named his 2006 book and one of his most famous speeches after a phrase from a Christian pastor.

Remember when Obama didn't have to contend with ties to Islam, but rather his ties to radical Christianity? Obama named 2006 book, The Audacity of Hope, after a sermon he heard from Jeremiah Wright, a Chicago pastor. Wright spoke about the "audacity to hope" in a 1990 sermon that Obama reworked into the title of his book and his 2004 Democratic National Convention speech — "The Audacity of Hope."

4. He's not praying at midday, either.

Here's Obama participating in a midday meeting with FEMA and not praying.

Obama loves a good Bible. There may be fuzzy, doctored pictures of him being inaugurated with a Koran, but there are several pictures and accounts of just how much Obama loves the Christian word.

And those videos of him mocking the Bible have been debunked, and show that Obama has an even deeper knowledge of Christian values than you thought.

Late in the afternoon is the third time in the day when a Muslim is called to pray, but Obama laughs in the face of calls to prayer.

7. Even after the sun sets, he'd rather speak to the American people than pray.

If Obama were a devout Muslim, he'd know it was time to pray right about now, but here he is interacting with the American public instead.

8. Michelle Obama doesn't wear a hijab or niqab — even when she visits countries like Saudi Arabia.

A Muslim woman's choice on whether to wear a hijab or a niqab differs from country to country and by person to person. In Saudi Arabia women are expected to wear a hijab or niqab. However, during a visit in 2015, the first lady wore a colorful, bright dress and blazer combo that kept her arms covered and hair free-flowing, and she chose not to cover her hair; several tweets using the hashtag #MichelleObamaUnveiled criticized her actions.

That Obama. He never stops. Not even for a nighttime prayer.

10. And when he finally does pray, it's in private meetings with Christian pastors on Air Force One.

Obama doesn't just put up a Christian act in public, but he even seeks Christian counsel in private. According to a 2010 Washington Post story, Obama holds private meetings with spiritual advisers on his birthday aboard Air Force One. A devout Muslim wouldn't seek Christian counsel on their birthday, would they?

11. He's so bad at being a radical Muslim that he's Christian.

Of course, there are just as many ways to be Muslim as there are Muslims in the world. But by any objective yardstick, Obama is not making much of an effort to be a devout Muslim and seems pretty clear about being a devout Christian.

It shouldn't matter if Obama is a Muslim or not, but the evidence is in — if Obama were a devout or radical Muslim — he's freaking terrible at it.