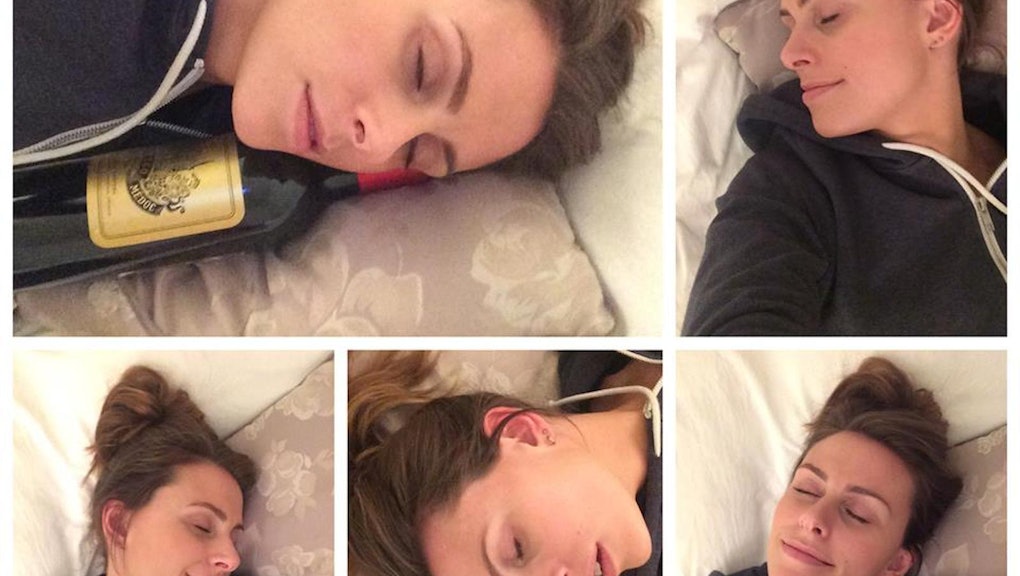 Here is a list of things that are objectively terrible, in ascending order of objective terribleness: broken zippers, meat loaf, people at Walgreens who insist on paying for a stick of gum with a credit card and new moms on social media. Case in point for the latter example: the Facebook Motherhood Challenge, a viral campaign that encourages moms to post three photos that demonstrate why they're happy to be mothers.

Ellie Taylor, 32, a comedian in the United Kingdom, was sick and tired of seeing angelic photos of rosy-cheeked behbehs with the hashtag #blessed cluttering her news feed. So she decided to retaliate by putting her own twist on the viral trend: the Non-Motherhood Challenge.

"I was nominated by myself to post five pictures that make me happy to be a non-mother," Taylor wrote, posting a photo of herself blissfully curled up next to a bottle of red wine. "Such special memories."

To date, the post has garnered more than 115,000 likes and 11,000 shares, with moms and childfree women alike gushing over Taylor's takedown of sanctimonious moms.

"Very jealous right now! Enjoy your sleep! I have not slept for two years," one woman wrote. Another chimed in: "I love this! Them bloody motherhood photos are doing my head in! Some of us don't have kids and it's not the be-all and end-all of life... some of us are happy without them!"

Taylor's post has also inspired other women to put up their own Non-Motherhood Challenge photos, which similarly extol the benefits of being childfree:

While Taylor (who did not respond to Mic's requests for comment) appears to have struck a chord among childfree women who are tired of being shamed for their choices, she's far from the only woman to point out that society unfairly views motherhood as the default setting for most women, while those who choose not to have kids face judgment and censure.

Even though women are increasingly opting out of motherhood, with the U.S. Census Bureau reporting that the number of childless American women is higher than it's been since the mid-1970s, women still face insurmountable stigma if they choose to pursue their own careers and social lives over parenthood, with people criticizing them for being "shallow" or self-absorbed.

The obsession over women's reproductive statuses has reached a fever pitch, with celebrities like Tyra Banks, Kim Cattrall and Chrissy Teigen speaking out about the stigma associated with being childfree.

While the comments for Taylor's post are, for the most part, supportive, a handful of commenters seem to object to her decision to opt out of motherhood, reflecting how deeply emotionally fraught the debate over whether or not to have kids has become.

"Enjoy your wine lol. I'm sure the hangovers and nights of loneliness sure make being single real nice lmao," one mother wrote. Another chimed in: "A great example of someone that isn't a Mum, of how clueless you are to how difficult ... it can be as a mother. Let women celebrate their success and show comeradery [sic]."

Of course, such comments are ultimately beside the point of Taylor's post, or of the debate over whether or not to have kids in general; the point is not to value one side or another, but to celebrate both choices as equally valid. The fact that Taylor's post has gone viral demonstrates how badly women want the conversation around motherhood to change — and in the meantime, at least moms and non-moms alike can agree that wine is pretty awesome.