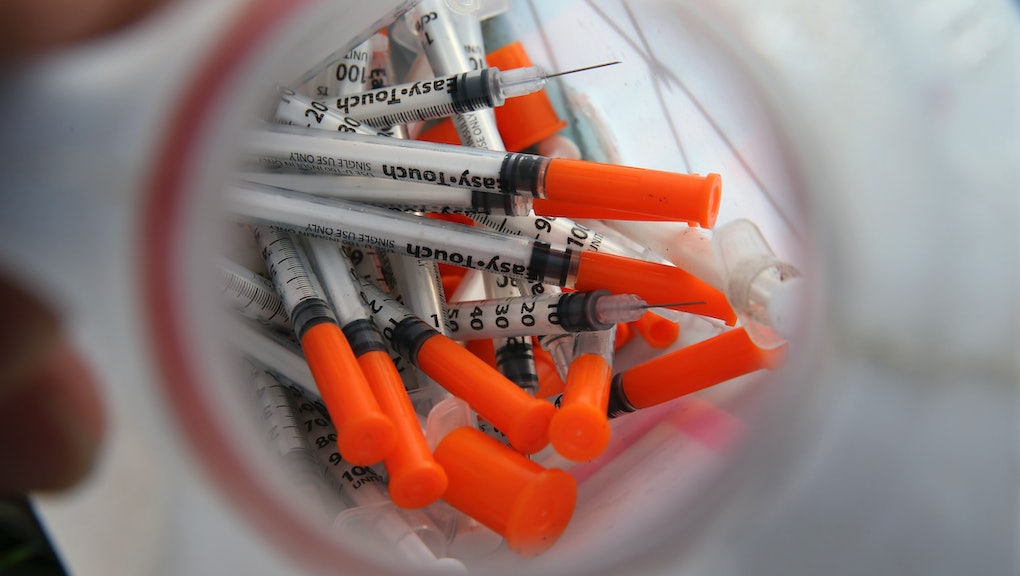 Obama Pledges $1.1 Billion to Fight Heroin Abuse — Here's What the Drug Is Doing to Us

President Barack Obama has proposed $1.1 billion in new funding to fight Americans' abuse of heroin and prescription opioids — drugs that have seen an alarming rise in recent years.

The latest in Obama's efforts to curb heroin and prescription drug abuse, the new funding will support a number of initiatives, including expanding Americans' access to treatment, expanding state-level prescription drug overdose-prevention strategies and increasing the availability of the overdose-reversal drug naloxone, according to the White House.

Heroin use is on the rise: A highly addictive opioid known for its euphoric effects, heroin has seen a dramatic spike in use in recent years.

The spike in heroin use has been linked to the widespread prescription of synthetic opioid painkillers like oxycontin and oxycodone. Like heroin, the pills are derived from the poppy plant, and they produce the same effect as heroin on the brain. When people develop an addiction to their prescription painkillers, they may eventually turn to heroin, which is cheaper and more accessible.

Forty-five percent of heroin users are also addicted to prescription opioid painkillers, according to the CDC.

"It's a crisis that so many communities across the country are showing," Marisa Hebble, director of the Opioid Task Force in northwestern Massachusetts, told Mic. "Many are reeling trying to figure out how to address this."

In her rural community, emergency rooms have seen an increased number of opioid-related visits, and first responders have encountered an increased number of opioid-related overdoses, Hebble said. Courts have seen more and more grandparents applying for temporary custody of their grandchildren, because their children are struggling with opioid addiction.

"Every sector of the community has seen the ripple effect from this crisis," she said.

Opioid abuse is a major problem. But what are heroin and prescription drugs really doing to us?

"When heroin is taken into the body — either by inhalation, nasal or intravenously — it ultimately will enter the blood circulation and make its way to the brain, where the drug is converted to morphine," Dr. William D. Stanley — medical director of Serenity at Summit Behavioral Health, an addiction treatment center in New Jersey — told Mic.

Next it binds to receptors in the brain and stimulates the production of dopamine, "which triggers sensations of pain relief, pleasure and euphoria," Stanley said. "Intravenous administration of the drug has been found to produce the most significant effect."

Synthetic opiates function in the same way — binding to receptors in the brain and producing dopamine.

"Clients have described the high as imagining your happiest moment and multiplying it by 5, 10, 15," Stanley said. That's why opioids are so addictive.

"Clients have described the high as imagining your happiest moment and multiplying it by 5, 10, 15," Dr. William D. Stanley told Mic. That's why opioids are so addictive.

And unfortunately, humans quickly develop a tolerance to them: In order to get those same euphoric effects every time, they end up having to take the drugs in ever-increasing quantities.

"Once someone has developed an addiction to prescription drugs, it becomes a very expensive habit to maintain," Hebble told Mic. "Unfortunately, heroin is very cheap and available, and has a similar effect on the body that prescription opioids do. A lot of people have made that transition."

"Especially when someone starts injecting, it's a very slippery slope," Hebble continued. "The body adapts to that addiction quite quickly."

What Obama's pledge means: As for Obama's $1.1 billion pledge to fight opioid abuse, "It's great to hear the president talking about it," Hebble said.

Fighting opioid abuse — and drug abuse, on the whole —has long been one of Obama's goals. In 2010, he established the National Drug Control Strategy, a five-year plan to reducing drug abuse and its consequences.

"I feel President Obama has attempted to bring mental health issues and substance abuse more to the forefront than any other president to date," Stanley said.

"President Obama has attempted to bring mental health issues and substance abuse more to the forefront than any other president to date."

"Historically, this has been a 'closet issue' — never to be discussed outside the confines of the home," he continued. "However, with escalating use and abuse of the drug, it has become a problem that can't be ignored any longer."

After all, human lives are at stake. "We're losing a lot of people," Hebble said. "I think the multiple levels of government — at the local, state and federal levels — are engaged and paying attention."