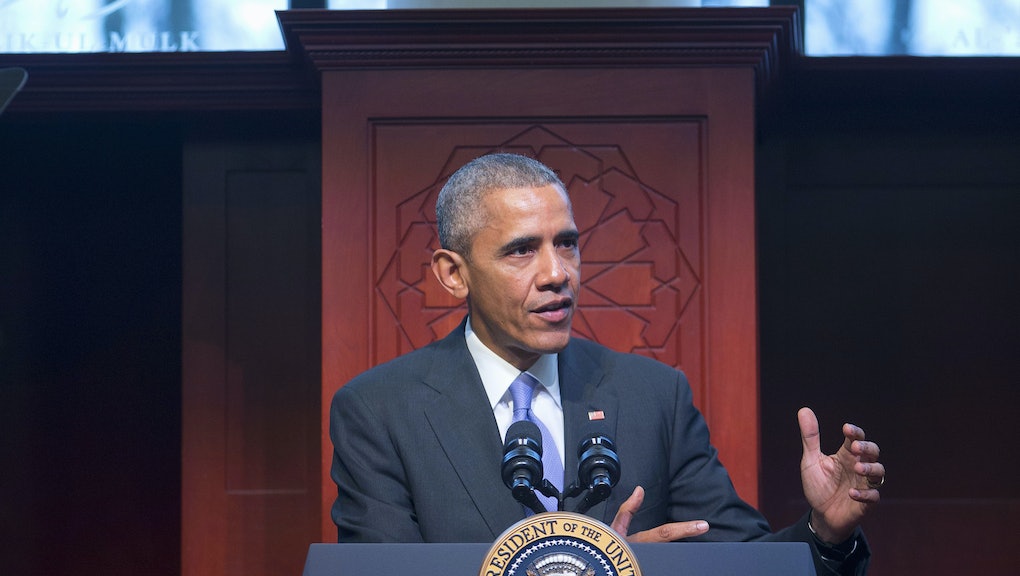 On Wednesday, President Barack Obama visited the Islamic Society of Baltimore and delivered a speech on religious tolerance. It was the first time he's visited a mosque during his two terms in office.

The first time, that is, unless you're part of the contingent that is adamant about Obama being a secretly practicing Muslim. Despite being discredited, debunked, disproved (and, ahem, lightly derided), 43% of Republicans still believe, according to a September CNN/ORC poll. What the White House promoted as an event simply meant to show solidarity with Muslim Americans was, said many conservatives, indicative of something else entirely.

In the time leading up to the event, it was pretty easy to find a range of Twitter users — from the ever-vocal social media racist to the right-wing talking head — pointing to the visit as proof of the president's surreptitious faith.

Herewith, proof of the "proof":

While most conservative news sites shied away from drawing a link between the event and the president's faith, some said the mosque visit was a clear show of sympathy for Islamic extremists.

The Washington Examiner cited the mosque's relationship with the Council on American-Islamic Relations to argue the Obama visit would "confer legitimacy on a mosque that joins forces with a terrorist front group." (The New York Times is dismissive of CAIR's supposed links to terrorism, noting the group condemns violence.) Breitbart wrote the mosque was run by an "anti-LGBT hate preacher," while the Daily Caller reported the mosque had "deep extremist ties."

In an article on Glenn Beck's The Blaze, contributor Brad Schaeffer compared the sight of a woman in niqab to "a Tolkien wraith" and noted the mosque's former imam Mohammad Adam el-Sheikh, who left in 2005, was member of "the extremist Muslim Brotherhood in Sudan in the 1970s."

"And now the president is calling on this same terror accomplice's former home base," Schaeffer wrote. "Is this the level of acquiescence to Islamic conduct that the White House still sees as 'outreach'?"

Finally, PJ Media was arguably the most blunt, citing an Islamic State fatwa as evidence terrorism is "drawn directly from Islamic canon" and "many Muslims actually do want to eliminate, destroy, and sabotage the nation [Obama] is sworn to protect."

Some criticism came from the left on other grounds. Liberal Muslims Asra Q. Nomani and Ify Okoye wrote in the New York Times that the president was implicitly endorsing gender segregation.

"To Muslim women's rights activists fighting for equal access to mosques as part of a broader campaign for reform ... the president's visit to a mosque that practices such blatant inequity represents a step backwards," they wrote.

However, most of the progressive community seemed to back the president as taking a stand against rising Islamophobia in the U.S., following a wave of high-profile Islamic extremist-linked terrorist attacks in 2015.

"This effort to connect the Baltimore Islamic center to extremism — by citing an imam that hasn't worked at the center for a decade — may seem like a stretch, but Maya Berry, executive director of the Arab American Institute, explained to Fox News that such accusations are a common tactic among anti-Islam activists," Think Progress wrote.

The Center for American Progress, a progressive think tank, said conservatives were declaring the president's "guilt by association."

During his visit, the president made light of the persistent "Obama is a Muslim" rumors, according to the Hill.

"Thomas Jefferson's opponents tried to stir things up by suggesting he was a Muslim," he said. "It's true, I'm in good company."