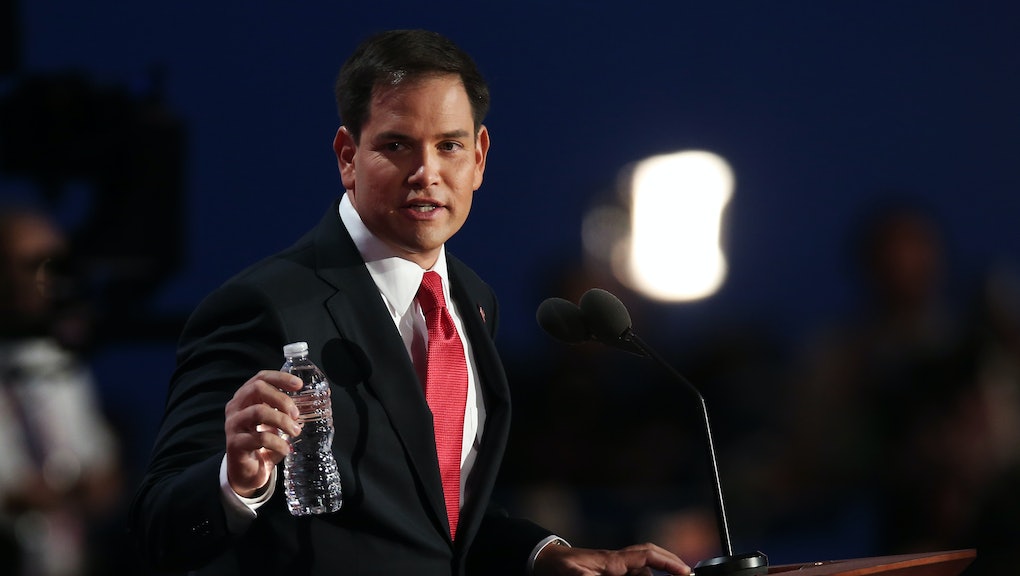 Marco Rubio's Fundraising Emails Are Thirstier Than He Is

Presidential contender Marco Rubio got so much grief for his epic 2013 water break that goofing on himself for it is now part of his campaign-trail schtick.

Rubio obviously values hydration — but a playful read of his email appeals for cash suggests a whole different kind of thirst.

Rubio catapulted out of Monday's Iowa caucuses with a third-place finish — the first phase of a "3-2-1-" plan that would have him place second to Donald Trump in the New Hampshire primary and roar on to a big win in South Carolina.

Charm offensive? As candidates scratch for every dollar they can get to underwrite their White House dreams, creativity is a must, and Rubio seems to be pursuing a charm offensive.

"I need you to hear this. I just took a couple minutes to record a special message just for you about the state of this race," read one Rubio email with a distinctive personal touch — and the recipient's name repeated twice in the same sentence, which is the fundraising equivalent of heavy eye contact.

If someone doesn't get seduced into donating, the emails don't stop — and the tone of the follow-ups can range from a little plaintive to Stage Five Clinger.

Even Rubio's wife, Jeanette, is lending her name to the intimate email appeals — but shh! She's keeping it a "secret" from her spouse.

"I didn't tell Marco that I was going to send you this email, but I felt it was so important to reach out to you today," she said in a Monday missive.

"Any email that a campaign sends out today has to be clickbait," he told Mic. "They can be personalized; they can be provocative. In the day and age of old, tired emails, creativity is king."

Fear vs. friends: Not every campaign seems as chummy as Team Rubio in fundraising tone.

Ted Cruz's campaign's emails are passionate — or downright scary: "IT'S CRITICAL THAT YOU UNDERSTAND:"

Billionaire-buster Bernie Sanders opens with a salutation of "Sisters and Brothers" and signs off with "In Solidarity."

And if you might have a few bucks to contribute, Jeb Bush calls you a friend — over and over again.

With subject lines like "Will you be the one?" Rubio's brand of campaign clickbait is often a little chiller than the three-alarm fires of Cruz's pitches.

In the end, of course, it's all about sweet talking that money into the bank.

And if a little sugar in a subject line does the trick, it's probably safe to assume Rubio would drink to that.