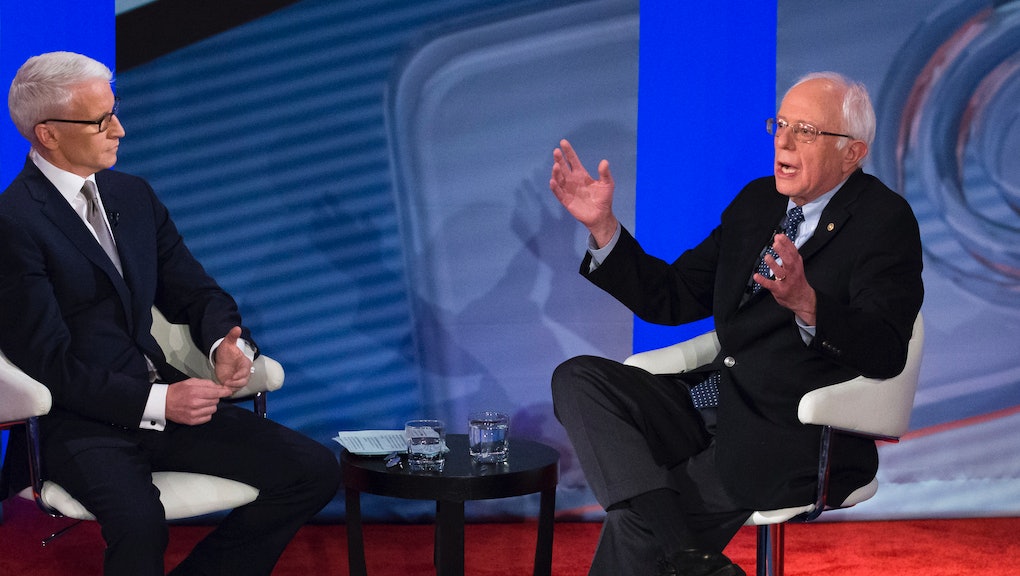 Bernie Sanders: "My Spirituality Is That We Are All in This Together"

Democratic presidential hopeful Sen. Bernie Sanders (I-Vt.) delivered some of his most candid remarks on religion and spirituality Wednesday evening at the CNN Democratic Presidential Town Hall, saying that his "very strong" Jewish faith underpinned his belief in social justice.

Asked at the Derry, New Hampshire, forum how he'd reach out to religious voters, Sanders indicated that his public and spiritual lives were deeply intertwined.

"It's a guiding principle in my life, absolutely, it is," Sanders said. "Everybody practices religion in a different way. To me, I would not be here tonight, I would not be running for president of the United States if I did not have very strong religious and spiritual feelings."

Those feelings, he said, demanded an empathetic response to systemic injustices.

"I believe that, as a human being, the pain that one person feels, if we have children who are hungry in America, if we have elderly people who can't afford their prescription drugs, you know what, that impacts you, that impacts me," Sanders said. "And I worry very much about a society where some people spiritually say, 'It doesn't matter to me. I got it, I don't care about other people.' So my spirituality is that we are all in this together and that when children go hungry, when veterans sleep out on the street, it impacts me. That's my very strong spiritual feelings."

The first non-Christian to win presidential primary delegates, Sanders has rarely discussed his faith in the past. At a recent Christian Science Monitor breakfast, Sanders indicated his Judaism was of a decidedly cultural, secular variety, pronouncing himself "not particularly religious."

Sanders and his Democratic rival, Hillary Clinton, have both couched their spiritual lives in social justice terms. Stumping in Iowa last month, Clinton, a Methodist, said her faith commanded her to lift up the downtrodden.

"The famous discussion on the Sermon on the Mount should be something that you really pay attention to," the New York Times quoted Clinton as saying. "There's a lot of great Bible studies: What does the Sermon on the Mount really mean? What is it calling us to do and to understand? Because it sure does seem to favor the poor and the merciful and those who in worldly terms don't have a lot but who have the spirit that God recognizes as being at the core of love and salvation."