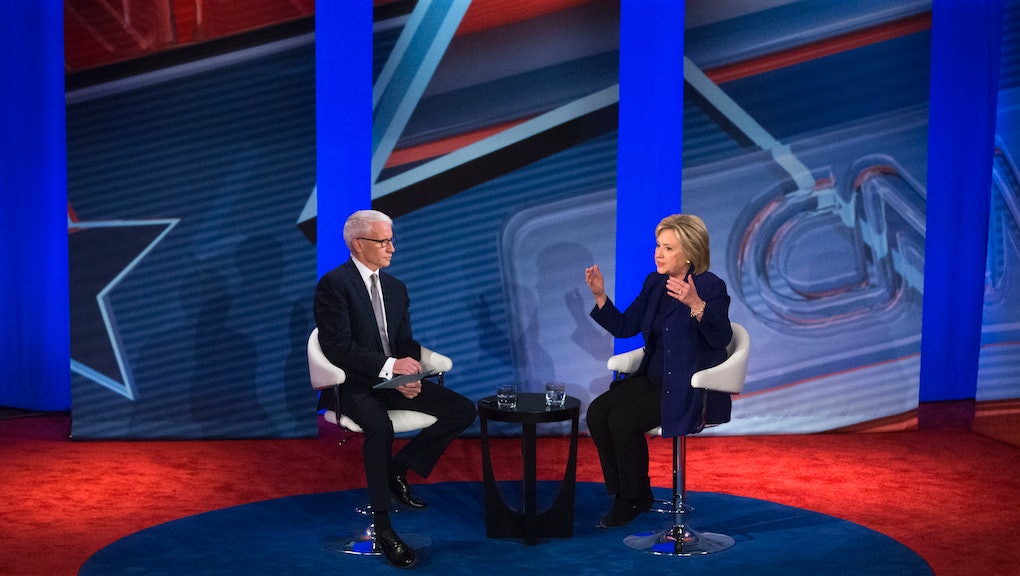 But the most revealing exchange of the night came after voter Michael Thiele voiced concerns about Clinton's "history of interventionist foreign policy," saying it was "troubling to many Democratic voters, including myself."

"As a voter opposed to the United States being the world's policeman, can you assure me you would not expand our military involvement abroad?" Thiele asked.

Clinton's reply was swift — and hardly the answer Thiele was looking for.

"No, I can't, Michael," Clinton responded. "I'd like to be able to say that I could but here's what I can say — I have learned and I have been really in the crucible of making a lot of hard decisions over the last years and military force must always be a last resort, not a first choice."

Emphasizing that she opposed "adventurism [and] ill-thought-out missions" and would not send combat forces into Iraq or Syria, Clinton also stressed that she could not "in good conscience" pledge never to expand military involvement overseas, given the uncertainties about what problems may land on the next president's desk.

What it meant: As wanting as the anti-interventionist left may have found Clinton's answer, it neatly encapsulated both her experience as the nation's former top diplomat and the hard-nosed pragmatism that has been a hallmark of her public life, often to the consternation of more idealistic forces.

As a senator from New York whose foreign policy outlook was formed in the crucible of the 9/11 terror attacks, Clinton developed a hawkish reputation as a member of the chamber, most notably voting in 2002 to authorize the war in Iraq. That vote contributed to Clinton's 2008 defeat at the hands of then-Sen. Barack Obama of Illinois, who pointed to the destabilization and carnage wrought by that conflict to argue that Clinton's foreign policy judgment was fundamentally flawed.

But after vanquishing Clinton in the 2008 Democratic primaries and winning the general election, Obama appointed his former adversary secretary of state. During her tenure as the country's chief diplomat, Clinton continued to exhibit interventionist tendencies — supporting an increase in U.S. forces in Afghanistan, advocating for the toppling of Libyan dictator Moammar Gadhafi and pushing the Obama administration to arm Syrian rebels.

Yet while Clinton may have often sought to steer American foreign policy in a more hawkish direction, she always did so from the perspective of liberal interventionism. She has never been a George W. Bush-style neoconservative, advocating unilateral regime change.

The same secretary of state who urged Obama to overthrow Gadhafi also  leaned hard on Israeli Prime Minister Benjamin Netanyahu to halt settlement construction, got the ball rolling on the administration's nuclear negotiations with Iran and spearheaded Obama's effort to repair frayed global ties in the wake of the Bush years.

In a 2011 speech before the Council on Foreign Relations, Clinton rejected the use of "hard" military power or "soft" diplomatic power alone, advocating for an American foreign policy defined the "smart power."

"We need to take on [extremist Islamist] ideology, counter its propaganda, and diminish its appeal, so that every community recognizes the threat that extremists pose to them and they then deny them protection and support. And we need effective international partners in government and civil society who can extend this effort to all the places where terrorists operate," Clinton said.

"To achieve these ends requires smart power," she continued, defining it as "a strategy that integrates all our foreign policy tools – diplomacy and development hand-in-hand with defense – and that advances our values and the rule of law."

Five years later, Clinton must strike a delicate balance between assuaging the concerns of an American public (and a Democratic base) weary from a decade-and-a-half of U.S. military involvement in the Middle East and projecting the image of an experienced stateswoman cognizant of the complex and often messy realities of geopolitics. For Clinton and the president she served, striking that balance has been a long-standing concern — and Monday night's answer reflected that ongoing effort.